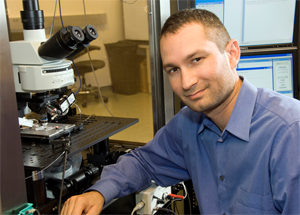 A scientist at the Gladstone Institutes has identified how the lack of a brain chemical known as dopamine can rewire the interaction between two groups of brain cells and lead to symptoms of Parkinson’s disease. This discovery offers new hope for treating those suffering from this devastating neurodegenerative disease.

In a paper being published online today inNeuron, Gladstone Investigator Anatol Kreitzer, PhD, identifies how the loss of dopamine alters the wiring of a small group of brain cells, kicking off a chain of events that eventually leads to difficulties controlling movement—a hallmark of Parkinson’s disease. More than a half-million people suffer from Parkinson’s in the United States, including the boxer Muhammad Ali and the actor Michael J. Fox.

“The development of truly effective and well-tolerated therapies for Parkinson’s has proven difficult,” said Lennart Mucke, MD, who directs neurological disease research at the Gladstone Institutes, a leading and independent biomedical-research organization. Dr. Mucke is also a professor of neurology and neuroscience at the University of California, San Francisco (UCSF), with which Gladstone is affiliated. “Dr. Kreitzer’s discovery sheds new light on the intricate processes that underlie motor problems in this disabling condition and will hopefully lead to the development of more effective medicines.”

Normally, two types of brain cells called medium spiny neurons, or MSNs, work together to coordinate body movements, with one type acting like a gas pedal and the other as a brake. It has been thought that a reduction in dopamine, an important chemical in the brain, throws off the balance between the two opposing MSN forces, leading to problems with movement. But Dr. Kreitzer wondered if another factor might also be involved. To better understand the relationship between dopamine and MSNs in people with Parkinson’s, Dr. Kreitzer artificially removed dopamine from the brains of laboratory mice and monitored the specific changes in the brain that followed.

Just as happens in humans, the mice without dopamine began to experience the motor symptoms of Parkinson’s, including tremors, problems with balance and slowed movement. But Dr. Kreitzer found that decreased dopamine levels didn’t just throw off the balance between the two types of MSNs, as was already known, but they also changed the interaction between MSNs and another group of neurons called fast-spiking neurons, or FSNs. 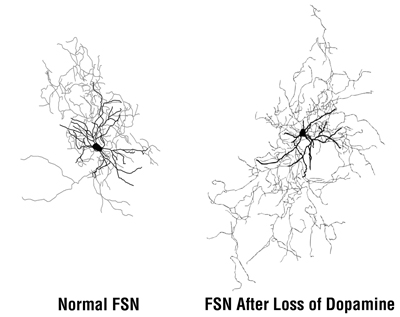 Dr. Kreitzer found that as the supply of dopamine decreased, the brain's fast-spiking neurons grew new branches and rewired their connections, disrupting precisely timed activity patterns in a part of a brain that controls movement.

Dr. Kreitzer’s experiments showed that under normal circumstances, FSNs connect to both types of MSNs in a similar way. But without dopamine, the signaling between the FSN circuits gets rewired and the neurons begin to target one type of MSN over the other. Dr. Kreitzer used computer simulations to show that this small shift disrupts the timing of MSN activity, which is key to normal movement. Ultimately, this rewiring may be an important factor in the development of Parkinson’s motor problems.

“Our research has uncovered how an entirely different group of neurons can play a role in the development of Parkinson’s disease symptoms,” said Dr. Kreitzer, who is also an assistant professor of physiology and neurology at UCSF. “We hope to target the changes among these neurons directly with drug therapies, in order to help relieve some of Parkinson’s most debilitating symptoms.”

Other scientists who participated in the research at Gladstone include Aryn Gittis, Giao Hang, Eva LaDow and Steven Finkbeiner. Funding for the research came from a wide variety of organizations, including the Tourette Syndrome Association, the National Institutes of Health, the Pew Biomedical Scholars Program, the W.M. Keck Foundation and the McKnight Foundation.

Dr. Kreitzer is an Assistant Investigator at the Gladstone Institute of Neurological Disease and an Assistant Professor of Physiology and Neurology at UCSF. The Kreitzer lab focuses on understanding the neural mechanisms that control motor planning, learning and movement. Their long-term goal is to understand how circuitry and activity in the brain shapes motor behavior and how disorders such as Parkinson’s disease and Huntington’s disease affect circuits in the brain.