A somewhat mysterious soft tissue found in the fetus during early development in the womb plays a pivotal role in the formation of mature beta cells, the sole source of the body’s insulin. This discovery, made by scientists at University of California, San Francisco (UCSF) and Texas A&M University, may lead to new ways of addressing Type 1 and Type 2 diabetes.

As reported today in the journal PLoS Biology, during the late stages of development in mice, this fetal tissue — called the mesenchyme — secretes chemicals. Those chemicals enable insulin-producing beta cells to mature and expand. Remove this mesenchyme tissue, the researchers found, and the mice do not grow their full complement of beta cells.

This work provides researchers with an immediate tool for research and drug discovery. By identifying the chemicals that this tissue secretes, scientists may be able to create new beta cells in the body or in the test tube — something currently beyond the reach of medical science.

“If we can identify all these chemical factors, there is a possibility that we could generate fully functional beta cells from stem cell populations. Also, such molecules might allow us to increase beta cell numbers in people with Type 2 diabetes, whose level of insulin production is impaired,” said Matthias Hebrok, PhD, who directs the UCSF Diabetes Center and is the Hurlbut-Johnson Distinguished Professor in Diabetes Research.

Laboratory derived beta cells would be a boon for people who have Type 1 diabetes as well, because the only cell-based treatment involves infusions of tissue containing these cells recovered from deceased donors — tissue that is in limited supply. 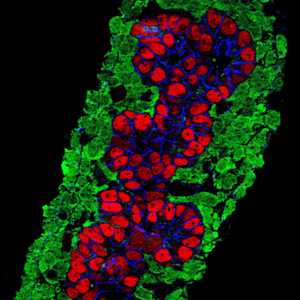 Diabetes Due To Problems in the Pancreas

Diabetes is a major health concern in the United States, affecting an estimated 8.3 percent of the U.S. population — some 25.8 million Americans — and costing U.S. taxpayers more than $200 billion annually. In California alone, an estimated 4 million people (one out of every seven adults) have diabetes and millions more are at risk of developing it.

The disease is caused by the body’s inability or diminished capacity to sense and respond to fluctuations in glucose levels, or sugar, in the blood. This ability is governed by the pancreas, a 6-inch-long organ sandwiched between the stomach and the backbone.

The pancreas does a number of things for the body, including producing enzymes that drain into the stomach to help digest fat, protein and other components of food. It also produces hormones, including insulin, which it releases into the bloodstream.

Insulin is produced within clusters of cells in the pancreas known as “Islets of Langerhans,” named after the 19th century doctor who thought they resembled tiny islands under the microscope. Within these islets are the beta cells, which monitor blood glucose and lower it when necessary by releasing insulin.

Scientists have long yearned to understand how the body makes beta cells so they could grow new ones in the laboratory for people with Type 1 diabetes or expand the existing pool of beta cells in people with Type 2 diabetes. Recently, their attention has been focused on embryonic stem cells because these cells can develop into many different types of cells in the body, and the embryo is the only place where the precursors of new beta cells are generated.

So far, however, nobody knows how to turn embryonic stem cells into mature beta cells.

There's a long way to go before we can generate the type of cell that we are born with, but that's where the field needs to go, according to Hebrok. "Those are the most effective cells we can get," he added.

For the last several decades, much of the work in the field has focused on the pancreatic epithelium — the tissues and cells in developing embryos that give rise to the mature organ and all the mature cells therein. But in recent years, Hebrok and others have turned their attention to the mesenchyme, a gelatinous mass of cells in the embryo that surrounds the developing pancreas and eventually forms much of the body’s connective tissue. 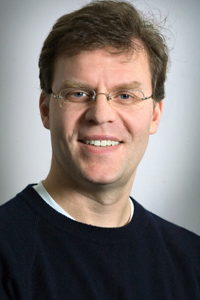 The mesenchyme’s role in diabetes has been something of a mystery — largely because it is difficult to study. Even so, scientists have known for a few years that the mesenchyme provides some sort of chemical signals that drive early development of the pancreas.

Wanting to know the specific role the mesenchyme plays at each stage of a mammal’s development, Hebrok and his colleagues found a way to manipulate it, making it disappear at various stages in mice by injecting it with a toxin that specifically targeted its cells. This allowed them to take snapshots of the mesenchyme’s role in development.

Surprisingly, they found that it has a profound effect on the pancreas and its mature beta cells even late in development. Targeting the mesenchyme at these later stages caused the mice to lose their full number of beta cells.

“We now know that the mesenchyme is required for the expansion of pancreatic cells, including beta cells,” Hebrok said.

With the system worked out, the researchers now can begin to search for the molecules that the mesenchyme produces at those different stages. Those could then be used to generate functional beta cells in the laboratory and may suggest ways to keep mature beta cells alive in adults.