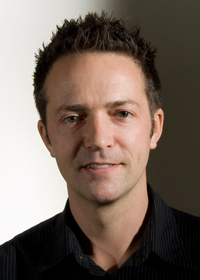 A scientist at the Gladstone Institutes has discovered how gene regulation can make hearts beat out of sync, offering new hope for the millions who suffer from a potentially fatal heart condition.

In a paper being published this week in the online Early Edition of the Proceedings of the National Academy of Sciences, Gladstone Investigator Benoit G. Bruneau, PhD announces the identity of the molecular regulator that uses electrical impulses to synchronize each heartbeat.

Abnormalities in heartbeat synchronization, called heart arrhythmias, are a cause of death for the 5.7 million Americans who suffer from heart failure, a condition in which the heart can’t pump enough blood to meet the body’s needs. At least 300,000 people die of heart failure each year in the United States alone.

“This is important progress for a better understanding of heart arrhythmias, which when combined with heart failure can be fatal,” said Deepak Srivastava, MD, who directs all cardiovascular research at Gladstone. “This is the first published research about a genetic regulator that coordinates the timing of the electrical impulses that make the heart beat properly.”

In many animals, including humans, electrical impulses must spread rapidly and in a coordinated fashion along a dedicated network of cardiac cells in order for the heart to pump blood efficiently to the rest of the body.

A genetic regulator, called Irx3, coordinates these impulses. When Bruneau and his team switched off theIrx3 gene in mice, the heart’s pumping fell out of sync. The electrical impulses—which normally follow a rapid path throughout the heart—diffused slowly and had trouble reaching their intended destinations. The mice developed arrhythmias as the heart’s chambers lost the capacity to beat in time.

Bruneau, who is also a professor of pediatrics at the University of California San Francisco (UCSF), conducted the research in collaboration with two Canadian labs. Gladstone, which is affiliated with UCSF, is a leading and independent biomedical-research organization that focuses on cardiovascular disease, neurodegenerative disease and viral infections.

“These findings have potential implications for the prevention and treatment of human heart disease, once we better understand Irx3’s role in the human heart,” said Bruneau. “An important avenue to explore could be whether humans with arrhythmias have mutations in the Irx3 gene.

“Now that we know the importance of Irx3,” Bruneau added, “We need to dig deeper to see if it’s possible to use drug therapy to target any of the electrical-impulse pathways that Irx3 regulates with drug therapy.”

Other scientists who participated in the research at Gladstone include Shan-Shan Zhang, Paul Delgado-Olguín, Nathalie Gaborit, Tatyana Sukonnik and John N. Wylie. Funding came from a wide variety of organizations including the American Heart Association, the National Institutes of Health, William H. Younger, Jr. Family Foundation and the American Recovery and Reinvestment Act of 2009.

Bruneau is a senior investigator at the Gladstone Institute of Cardiovascular Disease and a UCSF professor of pediatrics. He also holds the William H. Younger, Jr., endowed chair in cardiovascular disease, and is the recipient of the Lawrence J. and Florence A. DeGeorge Charitable Trust/American Heart Association Established Investigator Award. His research focuses on the regulation of genes that are important for fetal heart development, and the abnormal genetic functions that lead to congenital heart disease.

Gladstone is an independent and nonprofit biomedical-research organization dedicated to accelerating the pace of scientific discovery and innovation to prevent illness and cure patients suffering from cardiovascular disease, neurodegenerative disease, or viral infections. Gladstone is affiliated with the University of California, San Francisco.