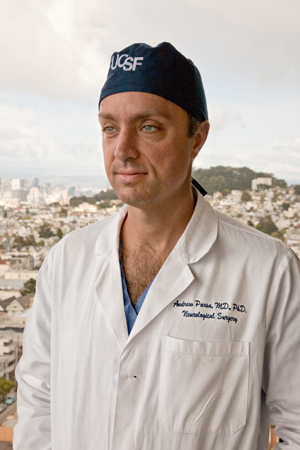 The first results of a multicenter Phase 2 clinical trial on a new brain cancer vaccine tailored to a patient’s own tumor will be announced on Monday at the American Society of Clinical Oncology 2011 Annual Meeting in Chicago.

The trial, conducted at three U.S. medical centers and led by doctors at UCSF Medical Center, found that the vaccine was safe and less toxic than conventional treatments and that it could extend survival for people with recurrent glioblastoma – a deadly type of brain cancer that kills thousands of Americans every year.

“The vaccine induces an immune response against multiple tumor-specific targets that allows patients to fight their own disease,” said UCSF neurosurgeon Andrew Parsa, MD, PhD, who led the research. “The survival data thus far compare favorably with historical controls and clearly support advancement of this vaccine into later-stage randomized trials to directly compare the vaccine’s effectiveness to conventional treatment.”

Without treatment, half of the patients in the trial would have succumbed to the cancer within five to nine months, based on historical data. After receiving the vaccine, however, the median survival for 30 patients who received at least four vaccinations was 11 months. Several have survived for more than a year.

“These results are encouraging,” said Andrew Sloan, MD, director of the Brain Tumor and Neuro-Oncology Center at University Hospitals Case Medical Center and Peter D. Cristal Chair in Neurosurgery at Case Western Reserve University School of Medicine. The next step, Sloan agrees, would be a more extensive, randomized clinical trial.

A second objective of the current trial was to see if the vaccine could produce an immune response in all patients, and the results showed that it did so in every patient in the trial tested to date. This suggests that doctors may be able to extend survival even longer by combining the vaccine with other drugs that enhance this immune response.

A Deadly Form of Brain Cancer

Some 17,000 Americans are diagnosed with glioblastoma every year, Parsa said, and only 2 percent of them survive longer than five years – even with treatment.

Glioblastoma treatment generally begins with a surgical resection, in which neurosurgeons remove the cancerous tissue from the brain. These surgeries are fairly common at large medical centers, and neurosurgeons at UCSF Medical Center perform approximately 850 a year.

The surgery usually is followed by radiation therapy and then chemotherapy to kill any remaining cancer cells. Many people undergo treatment only to have the cancer return a few months later, at which point doctors may operate again, followed by more chemotherapy.

The basic concept is similar to a vaccine for a disease like measles or mumps: an injection in the arm induces an immune response that helps the body fight the particular pathogen – or in this case, the cancer. An effective immune response would then shrink tumors and extend lives.

The problem with glioblastoma patients is that the immune responses induced by vaccines have historically been limited: either they did not kill all of the tumor cells or they worked on some patients but not on others.

After completing a Phase 1 safety trial in 2008, Parsa and his colleagues began enrolling patients in the single-arm Phase 2 trial to test the efficacy of the vaccine by comparing overall survival to historical controls.

The Phase 2 trial also was partially paid for with matching funds provided by the National Institutes of Health, but Parsa credits the American Brain Tumor Association, Accelerate Brain Cancer Cure and the National Brain Tumor Society with spearheading the effort.

“It never would have happened without them,” Parsa said. “Patient advocacy groups are an important component of how we inform patients about this disease. These groups are also increasingly critical to funding translational research, which bridges the gap between the laboratory and the clinic.”

Once a tumor was surgically removed from a patient in the trial, it was sent to the biotech company Agenus, Inc., which prepared a vaccine specific for that patient. The company shipped the vaccine back to the doctors who would inject it into the patient’s arm several times over the course of the year.

In the end, they demonstrated that the new vaccine is a feasible, safe and effective treatment for glioblastoma. Agenus, Inc. is now preparing for a larger, randomized clinical trial.

Parsa has not received any personal financial support or travel expense reimbursement for this work from Agenus or for consulting activities on behalf of Agenus. Neither Parsa nor UCSF has an equity interest in Agenus or other financial relationship with the company.