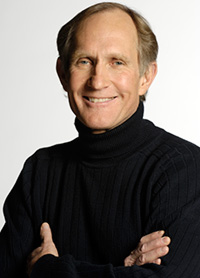 "Water is the driver of nature," an esteemed scientist, Leonardo da Vinci, asserted centuries ago. But can scientists be the drivers of diplomacy? That's what Nobel laureate Peter Agre, MD, is trying to find out.

Agre won the Nobel Prize for Chemistry in 2003 for his discovery of aquaporins – microscopic channels found throughout nature’s life forms that allow water to travel to places it otherwise might not.

It turns out that aquaporins play a role in many diseases. Agre is dedicated to finding a way to manipulate them to find a way to fight malaria. There were 247 million cases of malaria worldwide in 2008, according to the World Health Organization.

But during his April 8 talk at the UCSF-affiliated Gladstone Institutes’ Mahley Auditorium near the UCSF Mission Bay campus – called “Science Diplomacy in the 21st Century” – Agre talked about the role of public affairs as well as science. Like water traveling through aquaporins, scientists too can sometimes travel across otherwise impassable boundaries. Scientists may succeed in nurturing fragile international relationships in situations where diplomats have failed, Agre said.

His message about fostering scientific diplomacy to improve global health is one that is familiar to UCSF's community of scholars which is engaged in partnerships all over the world to fulfill the University's advancing health worldwide mission. Last year, for example, UCSF launched an international partnership with SEEK Development, a consulting firm based in Berlin, Germany, that aims to improve global health by helping to turn scientific evidence into public policy and action.

“For many of the world’s major health challenges – including HIV, tuberculosis, malaria, and maternal and child deaths – a failure to translate evidence on what works into practical health policies is costing lives,”  Richard Feachem, director of the UCSF Global Health Group, which is leading the collaboration, said at the time of the announcement.

As director of the Malaria Research Institute at Johns Hopkins University, Agre cited his father, himself a chemist, for his early love of science. His father’s laboratory demonstrations of wondrous chemical transformations awed Agre as a child. “Science is like magic where you understand the magic,” he said.

Agre’s concept of the scientist as a public citizen was shaped in part by Linus Pauling, PhD, a friend of Agre’s father who came to visit. Pauling, who won the Nobel Prize for Chemistry and later the Nobel Peace Prize, would balance a science lecture with an evening public lecture, Agre noted.

As a medical student Agre became attracted to a career in research. Water transport across cell membranes was a long unsolved riddle that could not be explained solely by osmotic diffusion across membranes. Agre’s quest to solve this riddle, which he began with studies of red blood cells in 1982, led to the first discovery of an aquaporin, which he reported in 1992.

In humans aquaporins now are known to play a role in the control of water in the kidneys, the eye and sweat glands, among others. They also are involved in metabolism, controlling the release of glycerol from fat. Aquaporins figure in disorders ranging from bedwetting, to brain edema, to cataracts, to arsenic poisoning and to rare congenital kidney diseases.

In malaria, aquaporins help mosquitoes to secrete fluids that transmit infection through the skin, and the malarial parasite uses aquaporins to help it obtain nutrients from its human host – knowledge that Agre hopes can be exploited to fight the disease.

Science is International – Even in a Single Lab

During his talk, Agre showed a picture of celebrants in his lab the morning he was named to receive the Nobel Prize, and noted at least nine nationalities represented. “It’s impossible to be in a top-flight laboratory and not have international scientists,” he said. “Science is an international endeavor.”

Again and again Agre used his own career as an example to point to the international collaborations through which people from across the globe come together with a shared passion to work on scientific mysteries, and become lifelong friends as a result.

“As scientists we have friends all over the world, and we can use those connections to help the world,” Agre said.

US universities are still the world’s scientific melting pot. “The United States is the world leader in science and technology, and the world respects that,” Agre said, showing survey data in which citizen’s from various nations ranked US science more favorably than US policy by 44 to 79 percentage points in terms of positive impressions. Because they are viewed favorably, scientists have opportunities to successfully foster diplomacy between nations, Agre said.

Scientists as a Force in the Public Sphere

Agre has played a role as a human rights activist, for example as a member of the Committee on Human Rights of the National Academy of Sciences, formed in 1976. Over the years the committee has come to the aid of imprisoned scientists and others across the world, including scientists persecuted by an army-led junta in Argentina, as well as Bulgarian nurses and a Palestinian physician unjustly tried and sentenced in Libya, among others.

Agre also has helped foster scientific exchanges with scientists from nations with governments generally viewed as repressive within the United States, as part of a program run by the American Association for the Advancement of Science, called the Center for Science Diplomacy. The group has made headway in making contacts with scientists in Myanmar, Cuba and even North Korea. “Many dream of coming to the US to do science,” Agre said.

Agre and other scientists made tentative steps to establish scientific contacts in North Korea when they traveled there in 2009 – always chaperoned – to meet with a scientific delegation and visited more than 15 scientific institutes.

“The Korean scientists are like many of us. … Their major interest is to create a better life for their children and grandchildren,” Agre said.

Agre cited the public policy contributions of two scientists who moved from California to Washington, DC, to serve as policymakers in the executive branch of the federal government – Harold Varmus, MD, UCSF Nobel Prize laureate, former head of the National Institutes of Health and current head of the National Cancer Institute; and Steven Chu, PhD, former Stanford Nobel Prize laureate, former director of the Lawrence Berkeley National Laboratory and current secretary of the US Department of Energy.

But in terms of the legislative branch, Agre noted, “When they make the votes, we’re not in the room.” He encouraged young scientists to build successful scientific careers, and then to think about running for office. Considering the precarious state of the world, he asked, “What do we have to lose?”