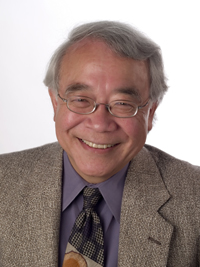 Keith Yamamoto, PhD, a long-time leader of UCSF School of Medicine’s research enterprise and a key player in shaping national science policy, has been named vice chancellor for research for the University of California, San Francisco (UCSF).

Yamamoto will lead UCSF’s effort to advance innovative, collaborative and interdisciplinary approaches to research across the university’s schools of dentistry, medicine, nursing and pharmacy, and its graduate programs in biological sciences. The goal is to drive the biomedical sciences into a new era of discovery.

The appointment was approved last week by the UC Board of Regents.

“The extraordinary strength of UCSF has been driven over the past several decades by a dedication to the support of fundamental research tied to an effort to deliver to the community,” Bluestone said.  “The appointment of Keith to this position ensures a continued emphasis on this critical component of the enterprise.”

"The last decade has seen unprecedented advances in biology,” according to Yamamoto, who said the next phase of biomedical research “will allow us to bring together knowledge across a spectrum of disciplines.”

“Opportunities in the biomedical sciences have lit up for us,” Yamamoto said. “We are in a position to truly understand the way complicated biological processes work -- and to solve complex biological problems of diseases in such fields as cancer, cardiovascular and neurosciences. UCSF has the opportunity to play a leading part in this next phase, and I’m honored to be able to play a part in the effort.”

Yamamoto’s initiatives will include developing new strategies to motivate and facilitate multi-disciplinary research; ensuring support for securing and developing advanced information and research technologies; and actively engaging in discussions and alliances with industry, government agencies, academic institutions, community organizations and other entities to advance fundamental discovery, technology transfer and application of knowledge.

Promoting research collaborations among the four UCSF schools will be a critical part of this effort. “One of the many fantastic things about UCSF is that the hard boundaries that exist at other institutions don’t exist here,” Yamamoto said. “That said, each school has important differences in organizational structure, goals, missions. Our goal will be to find synergy.”

Yamamoto brings a high-level perspective to his new position. He has been deeply involved in national science and public policy activities, helping to transform the way the nation supports scientific innovation and risk-taking.

He has long been involved in the process of peer review and the policies that govern it at the National Institutes of Health, currently as a member of the Center for Scientific Review Advisory Committee.

As chairman of the Board on Life Sciences of the National Research Council he testified before Congress in 2009 about a science-based strategy to produce food and biofuels sustainably, monitor and restore ecosystems, and improve human health.

“We’re in a position at UCSF,” he said, “to capitalize on these ideas in the areas of health and well being.”

In the lab, Yamamoto is a leading researcher on the mechanisms of hormone receptors in normal cellular and disease processes, with the goal of targeting these receptors for treating diseases.

He has been on the UCSF faculty since 1976, serving as director-Program in Biological Sciences Graduate Program in Biochemistry and Molecular Biology (1988-2003), vice chair-Department of Biochemistry and Biophysics (1985-1994), chair-Department of Cellular and Molecular Pharmacology (1994-2003), and vice dean-research, School of Medicine (2002-2003).

He earned his BSc from Iowa State University (1968; Biochemistry and Biophysics) and his PhD from Princeton University (1973; BiochemicalSciences) with post-doctoral work at UCSF (1973-1975; Molecular Biology).

Yamamoto’s salary will remain at its current level of $378,900. However, he will receive a 5 percent administrative stipend in recognition of his additional responsibilities, bringing his annual compensation to $396,900.