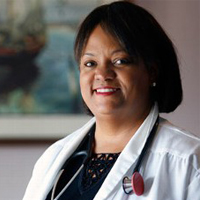 UCSF welcomed the U.S. Surgeon General Regina Benjamin, MD, MBA, to the Laurel Heights campus on March 10 as the keynote speaker of the 10th annual conference for health professionals working with patients with developmental disabilities.

Sponsored by the UCSF schools of medicine and nursing, the conference provided an update for practitioners who care for men, women and children who have autism, cerebral palsy and other developmental disabilities.

The 18th Surgeon General of the United States, Benjamin serves as “America’s doctor,” disseminating key scientific information to serve the public’s health and wellbeing, while managing the operational command of 6,500 health officers in the U.S. Public Health Service working in locations around the globe advancing health care. She is the founder and former CEO of the Bayou La Batre Rural Health Clinic in Alabama, former associate dean for Rural Health at the University of South Alabama College of Medicine in Mobile, and immediate past chair of the Federation of State Medical Boards of the United States.

Benjamin addressed the audience on her priorities for the nation’s health care, which focus on the impacts of social determinants, such as poverty, prevention and culture as part of the strategy to improve wellness.

“We need to move from a culture of sick care to a culture of prevention,” said Benjamin, whose first paper, The Surgeon General’s Vision for a Healthy and Fit Nation was released in conjunction with First Lady Michelle Obama’s Let’s Move Initiative. “Obesity is a major issue in this country and we need to stop telling people what they can’t do and eat, and start telling them what they can do, where they can walk, with easy and accessible choices. We need to move from a place of negativity to a positive conversation about being healthy and fit.”

Community health, according to Benjamin, includes having safe roads, healthy food and positive support, in addition to treating sickness.

Other priorities include her recent call to action to support breastfeeding and to prevent tobacco use among youth, the spread of HIV/AIDS, youth violence and teens’ abuse of prescription drugs. Addressing HIV/AIDS is personally relevant to Benjamin, who lost her brother to the disease. “My brother died of HIV, but he was treated at UCSF which was amazing. This is the mecca where the research comes from.”

Benjamin acknowledged the increasing challenges facing caregivers of people with developmental disabilities, as patients are living longer. Some 75 percent of the aging disabled live with family, and caregivers are prone to higher rates of anxiety, compromised immune systems and increased mortality, according to Benjamin.

“We need to provide support throughout the life span and pay attention to aging trends and how they impact the caregiver network,” she said. “The prescription pad doesn’t take care of everything.”

And as the nation’s physician, Benjamin had a few words of advice for patients. “As your physician, I have to tell you to take time for yourselves. You need rest, exercise and play. Have fun and take care of yourself.”