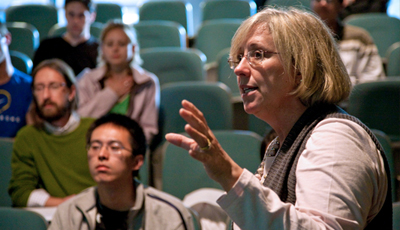 Lisa Coussens, PhD, professor of pathology, gives a lecture in breast cancer to students at UCSF.

When the Western Association of Schools and Colleges (WASC) commission extended UCSF’s reaccreditation for a full additional 10 years this week - the maximum extension allowed by WASC guidelines - it was a testament to what the University is doing to serve its students.

The WASC Accreditation Commission for Senior Colleges and Universities commended UCSF for its “exemplary levels of student achievement,” and recognized the University for its “many indicators of a rich learning environment, students learning outcomes and diversity.”

UCSF students echoed the sentiment of the report, citing the University’s rich infrastructure and level of support as a principal factor in their success.

“When I was researching dental schools I wanted to attend a school that embraced diversity because I’m a first-generation college student and from a minority background,” said Charlene Rocha, a third-year dentistry student. “It’s clear that it is one of UCSF’s core values and my experience has gone way above and beyond what I’ve imagined.”

Rocha was awarded a National Hispanic Health Foundation Scholarship in 2010 in recognition of her exceptional academic performance, leadership and commitment to community. She attributes much of her success to the strong support from UCSF.

“I can’t express enough how faculty and administrators reach out and make time for the students,” she said.  “Not just during office hours and lunch, but emails in the evening, or having phone discussions. That’s invaluable, especially for people of their caliber and that they are willing to pass that experience on to us is really indispensible.”

Upon starting her dentistry studies at UCSF, Rocha continued pursuing her interests including diversity and outreach to underserved communities. But it was the support from faculty and administrators who connect her with important resources such as scholarship opportunities that has made the most significant impact on her long-term career goals.

“My goals now include what I originally wanted, a specialty in orthodontics, but I’m adding - which I never imagined before - joining the UCSF faculty as part of my long term goals,” said Rocha. “That’s really attributed to the multiple faculty and administrators who have supported and encouraged me.”

Alfredo Mireles, Jr., a UC student regent and graduate student in Health Policy Nursing in the UCSF School of Nursing, cites UCSF’s exceptional and engaging student body as one of the reasons the campus environment is so appealing.

“The students in each individual school are often times at the top in their field and that creates a really robust environment for learning and self discovery,” he said.

The WASC commission recognized UCSF for its rention rates at virtually 100 percent for all degree programs, graduation rates for professional schools at between 93 percent and 98 percent and at or near 100 percent pass rates on nationally-normed licensure exams, indicating an exemplary level of student achievement.

As the first in his family to go to graduate or professional school, Mireles attends a monthly first-generation discussion group where members discuss the challenges of embarking on a path that diverges from the rest of his family.

“It’s not often talked about in terms of the struggles of graduate school, but the group gives someone like me an opportunity to talk about issues that I’m facing that others might not understand in my family. It makes you feel like it is normal to be the first person in the family to attend graduate school.”

Mireles’ experience at UCSF mirrors Rocha’s in many ways, including the unwavering support he has felt from administrators and faculty. “If you stick your neck out and say you want to do something that’s different than other people [UCSF] has a culture of innovation to allow students to pursue their own interests."

Mireles says UCSF has enabled him to cultiviate some distinct interests, including selection as a Jesse Marvin Unruh Assembly Fellow who advised California Assemblymember Anthony Portantino on issues of health, higher education, and human services.

"We go to school where there are true supporters and cheerleaders. And the people who work in student services are committed to student access and aggressively help students achieve their goals.”