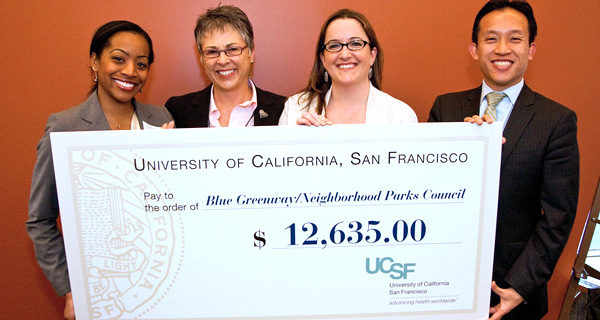 As part of UCSF’s ongoing efforts to support the local community, the University presented the Neighborhood Parks Council’s Blue Greenway project with a donation to help fund the construction of a “green” corridor that will transform San Francisco's southeastern waterfront into a go-to destination for recreation.

The Blue Greenway is the City of San Francisco's effort to improve the City's Southern portion of the 500-mile, nine-county regional Bay Trail and the Bay Water Trail and associated waterfront open space system. The 13 miles of waterfront parks and trails are planned to run from the Giants’ AT& T Park to Candlestick Point, connecting the Bayview-Hunters Point development with direct access to downtown San Francisco.

“The southeastern waterfront has always been the maritime and industrial heart of the city,” said Meredith Thomas, executive director of the National Parks Council. “Now it has the potential to be a parks center as well, transforming into a place with world class bike trails and walkways. The UCSF grant allows us to come up with engagement tools and more opportunities to create excitement about the project.” 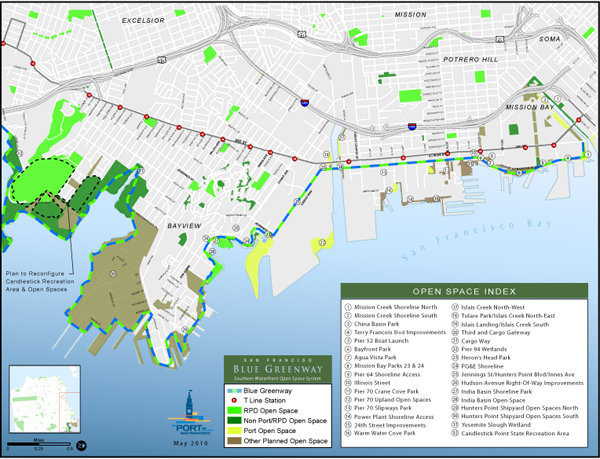 The $12,635 donation to the Blue Greenway project was presented on March 4 at the William J. Rutter Center on the UCSF Mission Bay campus, where representatives of the project’s partners, including the San Francisco Department of Environment, the Mayor’s Office, the Port of San Francisco and the San Francisco Urban Planning and Research Association were in attendance. San Francisco Board of Supervisors president David Chiu (District 3), and Supervisor Malia Cohen (District 10) were also on hand to celebrate the revitalization of the southeastern waterfront.

"It's moving for all the partners to see the same vision of a healthy, vibrant and green corridor on the southeastern edge of the city," said Cohen, whose district includes parts of Mission Bay and the southeastern quadrant of the city. "This work we're doing is making the city green, liveable and alive."

As UCSF moves forward with construction of UCSF Medical Center at Mission Bay - a 289-bed, 878,000 square-foot state-of-the-art and sustainable complex that promises to transform care for women, children and cancer patients – it remains a University priority to contribue to both the city and local community.

“The partnership city hall has with UCSF has helped not only to revitalize Mission Bay, but has been an integral partner to building a 21stcentury jewel of the city,” said Chiu. "Connecting our neighborhoods to children, family and all of San Francisco with the backdrop of the most beautiful bay in the world is spectacular. I’m looking forward to the day we can all walk, cycle, kayak, skate board and enjoy the Blue Greenway."

In 2007, UCSF began donating $5 per car each time a fan who attended a San Francisco Giants game parked at the UCSF Mission Bay Third Street Garage. The first recipient of the funds was the GreenTrust, a community-based nonprofit organization that works to realize a greener central waterfront. This donation to the Blue Greenway project is the first of three the Neighborhood Parks Council will receive during the next three years.

“One of the things we’re cognizant of is that we’re part of this section of the city,” said Barbara J. French, vice chancellor for Strategic Communications and University Relations. “We’re always looking at how we can contribute and be part of its success, and help realize this vision.”

In addition to discussing background on the University and how Mission Bay will expand and contribute to the district, Cohen also toured several the future medical center's mock-up rooms, getting a hands-on look on how the new facility will enhance patient care with larger rooms with large windows, sleeper couches for family members and a media wall to help patients stay connected to the outside world through video chat, interactive entertainment.