Tanzania President Jakaya Kikwete recently laid a foundation stone for the construction of a new health professional center at the Muhimbili University of Health and Allied Sciences (MUHAS) to be named after UCSF Senior Global Health Advisor Haile Debas. 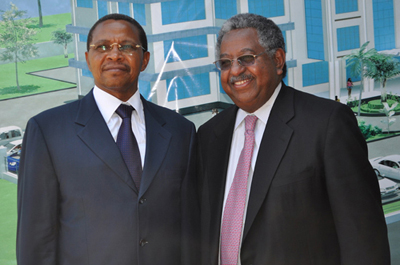 President of Tanzania Jakaya Kikwete, left, announced that a new health professional center at the Muhimbili University of Health and Allied Sciences (MUHAS) will be named after UCSF leader Haile Debas.
The new Professor Haile Debas Centre for Health Professions Education at MUHAS in Tanzania honors Debas’s “overwhelming support” of the UCSF collaboration with MUHAS, said Kisali Pallangyo, vice chancellor of MUHAS, during the dedication ceremony on Dec. 11. “The collaboration between MUHAS and UCSF, which has been the catalyst to the building of the Centre for Health Professions Education, is the result of our own vision but overwhelming support” came from Debas, Pallangyo said. He referred to Debas “as a true and dedicated son of Africa,” whose “passion for African development in the health professions is unequaled.” Internationally recognized for his contributions to academic medicine and a leader in global health, Debas, MD, is UCSF chancellor emeritus, dean emeritus of the School of Medicine, and founding executive director of Global Health Sciences (GHS). Until he stepped down as executive director of GHS in 2010, Debas had led the University’s expanding global health efforts, which now includes collaborations with many countries around the world.

Debas was instrumental in establishing the UCSF-MUHAS partnership in 2005 that has led to sustained and innovative change at both institutions. Through the collaboration, both MUHAS and UCSF share space, equipment, faculty as well as knowledge. Both public universities have made a long-term commitment to share these resources – drawn from across each institution – to achieve each university’s own goals, as well as the common goal of improving health locally and globally. Construction of the five-story health professional building to bear Debas’s name is expected to be completed in June 2011. Faculty and staff from across UCSF schools of medicine, nursing, pharmacy and dentistry are working with their MUHAS counterparts, as well as the MUHAS School of Public Health, to design the center and develop and share educational technologies. “Upon completion of the centre, our intention is to provide an environment that catalyzes interprofessional development, and transforms and extends education and research at MUHAS to directly improve the quality of care and provide health benefits to Tanzanians,” Pallangyo said. “Our vision is for this centre to become a hub for health professions education research excellence for the whole of the Eastern African Region.” The center is being constructed through the efforts of the MUHAS-UCSF Academic Learning Project (ALP), led at UCSF by Sarah Macfarlane, director of program development at Global Health Sciences and an associate professor of epidemiology and biostatistics.

Debas is the founding chair of the Consortium of Universities for Global Health and is director of the University of California Global Health Institute. A native of Eritrea, Debas received his MD from McGill University and completed his surgical training at the University of British Columbia. Under his stewardship, the UCSF School of Medicine became a national model for medical education, an achievement for which he was recognized with the 2004 Abraham Flexner Award for Distinguished Service to Medical Education of the AAMC. Debas served for two terms as a member of the Committee on Science, Engineering, and Public Policy of the National Academy of Sciences and served on the United Nations’ Commission on HIV/AIDS and Governance in Africa. He is a member of the Institute of Medicine, and served as chair of the Membership Committee. Debas is a fellow of the American Academy of Arts and Sciences. He is a member of the Board of Regents of the Uniformed Services University of the Health Sciences, a member of the Advisory Committee to the Director of the National Institutes of Health, and a member of the Board of Trustees of the Aga Khan University. Photo by Tom Nagunwa, MUHAS