Cancer is a product of evolution, and understanding how cancer evolves may be a key to more successful treatment strategies.

A billion years ago the world was cancer-free. That’s because Earth was home to only one-celled organisms – bacteria, for instance. Deadly tumors are a scourge that emerged as life on Earth became increasingly complex.

The trouble starts with multi-cellular life forms. Animals with many cells – mice, whales and humans – develop in complex ways. From embryo to adult, cells divide and move. But cancer is like development gone wild.

“The problem of building a multi-cellular organism is really the problem of suppressing cancer,” says UCSF’s Carlo Maley, PhD, an expert in both evolutionary biology and bioinformatics. “How do you get cells to stop proliferating and to devote their resources to the good of the larger organism?”

The short answer is that during the evolution of higher life forms cells have learned to listen to and obey molecular signals from other cells and from their surroundings. During development cells morph and become specialized – all at the proper time and in the appropriate place, in a precisely orchestrated way. Eventually cells that make up our 200-or-so types of tissues stop expanding their ranks and settle down where they belong.

The seed of cancer is a cell that ignores the directives of the orchestra conductor and that instead follows an offbeat drummer. Tumors emerge when cells that break the rules are not rehabilitated or eliminated. Over time, a succession of changes in a cell’s genetic program – encoded by DNA -- sometimes allows a cell not only to behave abnormally, but also to go unpunished. Self-serving, out-of-control growth is the result.

For an individual cell, a DNA mutation is an uncommon event. But there are 3 billion DNA building-block nucleotides in each cell nucleus. And let’s not forget that humans have trillions of cells. Throw in the fact that we live for several decades, and it becomes clear that normal physiological and biochemical wear-and-tear should result in a multitude of instances of harmful and even cancer-causing DNA damage. Cancer should be even more devastating than it is – perhaps even a threat to the survival of the species.

The reason many more do not experience cancer is that we have in fact evolved natural defenses to protect against such out-of-control cell growth, Maley says. But these defenses are imperfect.

Some species fare better than others in suppressing cancer. For instance, elephants do not get more cancers than mice, even though an elephant has about a million times more cells than a mouse, Maley says.

Not all the defense mechanisms against cancer are known, but several are. Humans and other animals have biochemical tool kits for repairing DNA. If repair fails, the offending cell normally is programmed to commit suicide. And even without the constraints imposed by the neighboring community of cells, a cell can divide only a limited number of times.

The immune system often is capable of attacking cells displaying molecular markers that point to abnormal growth. Even so, the immune response may be insufficient to stop the formation of a tumor.

The cells that become cancerous are the ones that mutate and change in ways that allow them to get around these gatekeepers.

Although multi-cellular organisms have evolved ways to fight cancer, each individual tumor also is capable of evolving. The evolution of tumors is lightning-fast in comparison to the evolution of species. While medical science works a bit faster than human evolution, cancers also morph to elude the grasp of oncologists who would vanquish them with the latest drugs.

But the same concepts that are used to study the evolution of sexually reproducing, multi-cellular organisms can be applied to tumors to come up with new and possibly more effective treatment strategies, Maley says. The key is to not treat the tumor as something that is uniform and unchanging. 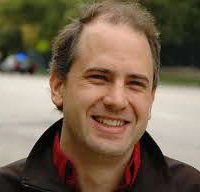 Survival of the fittest – what scientists call “selection” – is at play during cancer treatment.  Whack that tumor with some nasty chemotherapy and it may disappear, only to grow back years later. Cancer’s resilience is a result of genetic diversity.

Scientists and physicians who treat cancer have come to appreciate more and more that tumors differ genetically from patient to patient -- even among individuals with the same diagnosis, and even when the tumors look the same to a pathologist.  But in recent years researchers also have learned that within a single tumor there is great genetic diversity and variation among clusters of cells.

Cancer starts as a mob of cells, all clones derived from one lone evildoer. As the cells in the clone colony breach normal constraints and continue to grow and divide, every so often they give rise to cells with new genetic mutations. This is the source of genetic diversity within the tumor.

Treatment represents a change in the tumor’s environment to which tumor cells must adapt to in order to survive. The tumor cells that endure and keep growing despite treatment are genetically different and have different capabilities than those that dominated before treatment. They are the product of natural selection in action, Maley explains.

“Natural selection happens anytime in any system in which you have three conditions. There must be variability in the population. Variation must be heritable. And variation has to affect fitness.”

“There is no cancer therapy known that does not select for resistance,” he says. “A more diverse cancer-cell population is more likely to have a resistant clone, and in the environment of the therapy, it will tend to out-compete the other cancer cells.”

Maley has shown that a better understanding of evolution within tumors can help better predict how quickly or slowly cancers are likely to arise from pre-malignant, abnormal generations of cells. Similar explorations of cancer evolution can shed light on treatment resistance and how to overcome it – the key to greatly improving patients’ chances for survival.

In essence, the goal is to slow down the evolution of cancer within the patient. “If you measure someone’s pre-malignant tumor and how fast it evolves, then you should be able to predict how long it’s going to be before they get cancer,” Maley says. “You could do the same in someone who already has cancer to predict how long it may be until they relapse after therapy.”

In a study of a pre-cancerous condition called Barrett’s esophagus, Maley and colleagues are developing methods to measure the factors that influence how quickly abnormally growing clusters of cells evolve through a succession of clones on the way to becoming full-blown cancers.

One factor is mutation rate – either the mutation rate of all DNA, or of just the DNA that encodes proteins. Another is a measure of the number of evolving cells in a tumor. But for this measure, the only cells that count are those that are capable of dividing continually, Maley says. A third factor is how quickly cells divide. And yet another is the relative advantage a cell gains over a competitor due to a specific mutation.

So far, Maley has determined that the amount of genetic diversity within Barrett’s esophagus is a good marker of tumor evolution. In his study it was significantly associated with the development of cancer.

Of course the larger goal is to come up with new treatment approaches to keep tumors from morphing into forms that are ever more life threatening. “We want to intervene to slow down evolution in the cells of our bodies,” Maley says.

In some cases current drugs may even speed the evolution of cancers, according to Maley. Many chemotherapy drugs are what Maley calls “cytotoxic.” This means they aim to kill cells, usually by interfering with a cell’s production of new DNA as it prepares to divide. “With chemotherapy you try to kill all the cancer cells,” Maley says. “That’s a very strong selective pressure, and it offers a huge advantage to any cells that are resistant to the treatment. Resistant cells can run wild after cytotoxic drugs clear out all the competitors.”

New approaches may be able to hold death-by-cancer at bay until the clock runs out. For instance, a drug – or a combination of drugs – that slows cell division could reduce selective pressure for resistance and delay the onset of cancer past the natural lifespan of humans.

“We tend to judge the immediate effects of treatment on tumor size, but what’s really important is patient survival,” Maley says. “A drug might not quickly shrink a tumor measurably, but that would not matter down the road if the patient never relapses.”

Cancer is primarily a disease associated with aging. The median age of diagnosis for most cancers is in the mid-sixties.

“We think the process from first mutation to malignant tumor takes from 20 to 50 years. If we increase the generation time of cancer by factor of two, most people would die from another cause,” Maley says.

A much more in-depth presentation of cancer evolution can be found a Wikipedia site that Maley curates, called “Somatic Evolution in Cancer.”