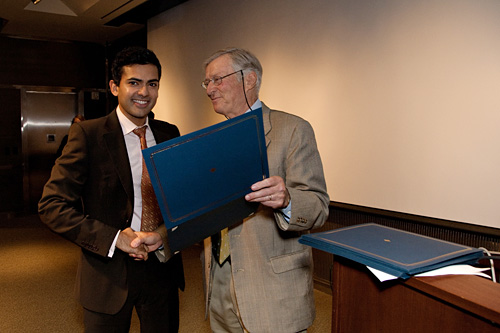 John Ziegler, director of Global Health Sciences Graduate Group, congratulates Ken Russell Coelho, who was among the 18 students to graduate with a masters degree in global health. Coelho, who also has a BA degree in psychology from UC Berkeley, would like to study the framework for data driven evidence-based health policy in India to address and reduce stigma and disparities in care.

One went to East Africa to develop ways to improve surgery in remote communities. Another ventured to Brazil to collect data on Hepatitis C. And another Global Health Sciences masters student traveled to Kenya to
help HIV-positive farmers generate enough food to stay alive.

These are a just a few of the amazing fieldwork placements of students who were part of the second class to graduate with a masters of science degree in global health on July 30.

The 12-month Masters Program in Global Health Sciences is designed to prepare students and practitioners for leadership careers in international health policy, health care, and health research and development.

Although new to UCSF, the program’s popularity is surging, with far more applicants for this fall’s class than available spots, and other universities calling on UCSF to get tips for starting their own global health masters degrees.

“There’s growing interest nationally and internationally, so I think we’re at the right place at the right time,” said Karen Nelson, Global Health Science’s education officer. “Our program meets the needs of many types of students.”

The degree program was developed in response to heightening awareness that solving many of the world’s health problems will take far more than treatment, said Haile Debas, MD, chancellor emeritus and dean emeritus of the UCSF School of Medicine, and the founding executive director of Global Health Sciences.

“It’s a hugely emerging field,” said Debas, who is stepping down from directing Global Health Sciences, but remains actively involved. “Health care is tightly joined with the economic status of people, the educational status of people, their access to clean water and food. Global health problems are so complex you can’t solve them just with doctors or nurses, you need to bring a list of disciplines.”

He adds: “Our masters program is intended to train the kind of leaders who will develop the science and practice of global health.”


Through small seminars, discussions and a spring field project, the program teaches students to take a critical view of the interdisciplinary nature of population health, including the influences of politics, economics, environmental conditions, and culture in the era of globalization. While most fieldwork is overseas, some students opt to focus on underserved populations within the US, which is encouraged as a key aspect of taking a truly global approach. More than 70 faculty members from all four UCSF schools – dentistry, medicine, nursing and pharmacy – the Graduate Division and UC Berkeley, teach and mentor the students.

This year, 18 students graduated with masters degrees in global health, compared to seven in its first year. Now 30 students are slated for the 2010-2011 class, which begins studies in September. While the first year’s class included only UCSF faculty or students as the program got its bearings, this year’s students were from diverse backgrounds and locations in the US and around the world. They ranged from surgeons to psychologists, and emergency medical physicians to health systems experts, and included seasoned professionals and freshly minted undergraduates. 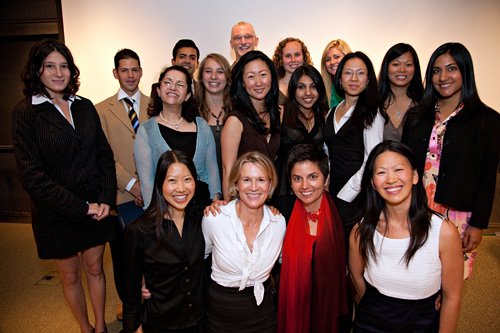 Eighteen students graduated with masters of science degrees in global health during a ceremony at UCSF Mission Bay on July 30.

“The market is bringing us students from just about all walks of life you can imagine,” said Ziegler, an oncologist who has an extensive background in global health including establishing the first cancer research hospital in Uganda. There, Sue Desmond-Hellmann, MD, MPH, now UCSF chancellor, spent two years of her residency at UCSF studying Kaposi’s sarcoma.

Ziegler attributes this growing interest in saving and serving the world to the Internet’s striking ability to educate people everywhere about global realties, such as health inequities and injustices, and the booming interest to travel the world among youth.

“Many students recognize that they’re living in a privileged economy and are greatly disturbed by the global disparities of wealth,” he said. “They’re moved and motivated to level the playing field.”

Motivated to Make a Difference


At UCSF, students have many faculty role models who are dedicated to eliminating health disparities. One of them, pharmaceutical scientist and global health social entrepreneur Victoria Hale, PhD, an adjunct associate professor in the Department of Biopharmaceutical Sciences at UCSF, was the guest speaker at the graduation ceremony.

Internationally recognized for her innovative health care solutions, Hale was the founder and CEO of the nonprofit Institute for OneWorld Health, which provides affordable medications for neglected diseases. Today, she is CEO and founder of Medicine 360, another nonprofit pharmaceutical company that addresses unmet needs of women and children by developing novel, affordable and sustainable medical solutions. 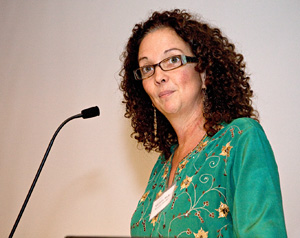 For recent graduate Sher-Ping Leung, a surgeon from British Columbia in Canada, years of providing basic health care in Guatemala, China and Bangladesh prompted her interest in the UCSF program. The course has empowered her desire to make a long-term commitment to improve medical care in poor countries, particularly improving surgery, Leung said. “I’m less naive. I feel more confident branching out and using my skills.”

For her fieldwork project, Leung worked in Tanzania developing a surgical skills assessment tool for measuring the competency of surgeons, including lay surgeons with no formal education. She hopes it will help direct training. “I wouldn’t have had the opportunity to do something this bold on my own,” she said.

Fellow student Chloe Eliza Le Marchand, who entered the UCSF program after getting her BA degree from Brown University with a dual major in Human Health and Disease and French Literature, was involved in a research project on HIV-positive refugees from West Africa living in the U.S.

Her fieldwork project on Hepatitis C in Brazilian hospital patients convinced her to apply to medical schools, Le Marchand said. Before, she’d been on the fence. “Once I was in Brazil and got to see the physicians at work, they sort of swept me away. You can help patients enormously; you can see improvements instantaneously.”

One of the highlights of the recent graduation ceremony was a viewing of a student-made video with interviews with the graduates. With humor, spirit, affection and even outdoor group dancing to Michael Jackson’s “Thriller,” the video captures what students say is one of the most significant parts of the program.

“The people,” said student Stacy Salerno, one of the filmmakers. Salerno did her fieldwork with a food security organization in Kenya working with HIV-positive farmers. “The faculty, the staff and the multidisciplinary group of students . . . They’re amazing.”