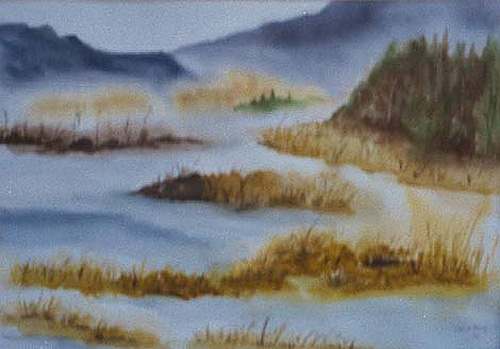 The importance of creating art to people suffering from neurodegenerative disorders is being examined through a novel combination of perspectives at UCSF’s Memory and Aging Center (MAC).

With supporting funds from the Hellman Family Foundation, the new program aims to raise awareness about neurodegenerative disorders by allowing an accomplished artist from any discipline to spend a year at the MAC learning from scientists and patients in order to produce original public art.

Aschheim has spent years creating sculptures and drawings that grapple with memory and is now beginning a new project with interested UCSF patients. She is collaborating with upright bass player Lisa Mezzacappa, and the pair has begun meeting with patients and scientists to discuss possible projects.

In describing the program’s inception, primary care doctor Patricia Gibbs Hellman, MD, said, “Bruce Miller presented not only a proposal to fund standard kinds of things like clinical trials and lab research, but also something unconventional: art. He proposed a way to bring in that most precious attribute, human creativity, as a force to inspire thinking about memory, to help brains in the challenging task of thinking about themselves.”

The clinical director of MAC, Miller has observed patients with neurodegenerative diseases, such as dementia and autism, gain artistic ability and pleasure from creating it. Particularly impacted are patients suffering from a type of dementia that degrades the brain’s frontal lobe, inhibiting language skills.

The MAC, which is adorned with artworks by patients, features some of their works in an art gallery on its website.

Miller and colleagues from UCSF and the University of British Columbia recently published a paper in the journal Brain that documented one patient’s increasing visual artistic skills and declining verbal skills as her disease — primary progressive aphasia — advanced. Neuroimaging showed that while some areas of her brain deteriorated, others experienced an increased volume of gray matter.

Miller hopes this paper is just the beginning of a scientific inquiry into the creative brain — where the visual arts are represented; how we can enhance them; how abilities differ with different neurodegenerative conditions; and whether participating in an artistic program may have some emotionally therapeutic benefits.

The MAC already hosts a small weekly arts group for its patients. 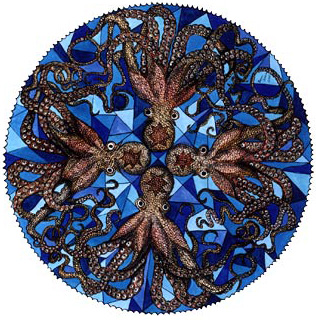 O is for Octopus (from an ABC book of invertebrates) by Anne Theresa Adams, Gouache, 2000

“We have a goal that is multi-dimensional,” Miller said about the visiting artist program. “One component is that we will get our scientists to appreciate how the arts help us understand our own work and also how we can use the art to help our patients.”

“My work has been profoundly influenced by artists, such as Gabriel Garcia Marquez talking about his concept of semantic dementia,” Miller continued, “these are the juxtapositions or interactions that we don’t normally have. That’s one of the major goals of the program.”

Aschheim has already been hard at work and some of her installations can be seen on the UCSF campus. Her work is displayed in the ALS, or Lou Gehrig’s disease, Center, as well as in the MAC waiting area.

“A big goal for me is to make art work for patient waiting areas. Art has a job to do there, by giving context in a place that’s stressful,” said Aschheim.

Like many of Aschheim’s earlier works, the larger-than-life web of fibers placed on the MAC waiting-room wall resembles a neural network. Embedded in the network of blue glowing nodes are small videos produced during eye-tracking experiments.

The video documents a continuous line of where a patient’s eyes wandered while looking at a photograph. MAC scientists conduct eye-tracking experiments to learn how visual perception changes with neurodegenerative disease.

The artwork is “giving the data a second life,” explained Aschheim, who said the public often learns the end result of research but knows little of how the information was collected or the result determined. Peering at the video also almost inevitably provokes the viewer to think about, “What do I look at first?” said Aschheim.

In discussing her current artistic work with MAC, Aschheim said she and Mezzacappa wanted to branch out in new directions. They have been visiting patients at their homes in an effort to better understand the day-to-day experience of living with a neurodegenerative disease.

“The goal is to get out of the mind set of disease, to see patients as whole people, and then use our skills as artists in a way that makes you want to hear their stories.”