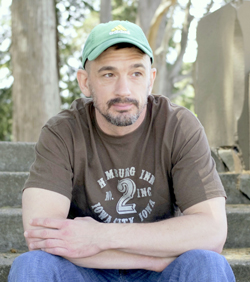 Being selected for a fellowship in pediatrics at UCSF is a rare distinction, but Chris Adrian, a UCSF pediatric fellow in hematology/oncology, also is one of the rare few named by the New Yorker as one of its “20 under 40” writers to watch.

As the New Yorker’s list triggers ripples of discussion about its meaning and merits, its featured writers, including Adrian, are garnering attention and acclaim. The magazine, which announced the writers in its traditional June summer fiction issue, is publishing new stories from all of them.

Adrian’s story, slated to run later this summer, is from his soon-to-be-released new novel, The Great Night, a retelling of A Midsummer Night’s Dream, set in Buena Vista Park, San Francisco. The magazine already has published four of Adrian’s stories. One of them, A Tiny Feast, was also taken from the new book. Adrian is the author of two previously published novels, Gob’s Grief and The Children’s Hospital, as well as numerous short stories. Many of the stories are published in the anthology, A Better Angel.

Adrian writes frequently of sick, injured or dying children and doctors and hospitals. As a fellow, his hospital surroundings are a place of science and hope, of tangible treatments and mixed results. His literary medical world adds angels, mythical beings, and magic.

Adrian is drawn to history; in his writing fact and fiction are intertwined. Gob’s Grief is set during the Civil War. Children’s Hospital is a revisiting of Noah’s Ark. He writes with a down-to-earth humor that softens the pain.

Q. Can you please give a mini-biography?

I was born in Washington, D.C. and lived in Annapolis, Maryland until I was about ten. Then we moved the Miami—my father was an airline pilot and was able to fly a larger plane with the transfer—and then Orlando, which is where I went to high school. I went to the University of Florida in Gainesville for undergrad, to the University of Iowa for an MFA, to Eastern Virginia Medical School for an MS and MD, and then did my residency in Pediatrics in San Francisco. After residency I started at the Harvard Divinity School for a divinity degree, and then interrupted this to come back to UCSF to start fellowship training. I’ll finally finish divinity school this fall, and then return to San Francisco to finish the fellowship.

Q. How do you have time for writing, your medical training, and your divinity studies?  Does it feel as overwhelmingly busy as it sounds?

I’m lucky that the folks in charge of me in both places have built a lot of flexibility into my education program. Each discipline has made time for the other in a way. It does get a little gruesome at times, but I never feel as busy or as potentially overwhelmed as I did as a resident. I think there’s something about not having to sleep at the hospital that makes all subsequent types of business seem less onerous.

Q. When did you start writing fiction? When did know you wanted to push it along as a serious pursuit?

I started writing in high school after I figured out I had no talent as a painter, and planned on sticking with it in college, after I fell under the influence of a couple of extraordinary writing teachers.

Q. When did you become interested in being a doctor? What do you think prompted this?

My mother gave me a toy stethoscope when I was five and informed me that I was going to become a doctor one day. I was a relatively suggestible kid, and a nerd, so that all seemed fine to me. During the managed-care misery of the late-eighties and early nineties, she later encouraged me to do something else, but it was too late; it was all I had ever considered doing with my life.

Both choices were surprises. Pediatrics was the last thing I thought I would do. I was kind of afraid of kids, and so I made it the last of my third-year medical school clerkships. But it was the only thing I liked. I was rather terrified of my oncology rotation as a resident, but fell quickly in love with the patients and staff on the oncology ward. At the end of the six weeks I could no longer imagine doing anything else. In both cases—my pediatric clerkship and heme-onc rotation—I met people whom I greatly admired and wanted to be like.

Q. Do you see yourself equally as a doctor and a writer, kind of morphed into one being? Or are they more compartmentalized, with you needing to shift gears between mindsets or activities?

I think both disciplines inform each other in obvious and not-so-obvious ways. Being a good listener and a good observer is useful both to a physician and a writer, but it’s not good for your patients if you’re spacing out about their imagined interior lives when you should be signing for their chemotherapy. I definitely find that I need physical and psychological distance from the hospital to make progress on a big project like a novel.

Q. What influenced your interest in going to divinity school?  Are you strongly religious or spiritual?

I became interested in divinity school towards the end of the residency. The used bookstore down the street from my apartment had a fantastic western theology section, and I was doing a lot of amateurish reading for the novel I was working on at the time. I wanted to go study what I had been reading systematically, and with supervision. Once I decided I wanted to be an oncologist, it seemed like I had an even better reason to go. It’s been really useful to go back to the divinity-school world after having done pediatric hematology/oncology for a year. As young oncologists we learn skills to be supportive of families in crisis, and that’s similar to what young ministers are taught—although the teaching in divinity school is much more explicit and transparent about its philosophical underpinnings. I’m not particularly religious—although I was a very serious Catholic as a boy—and I’m lucky to go to a school someplace where it’s okay to leave the “religious-affiliation” space on your study card blank.

Q. You’re also taking a course in medical ethics?  Is this a place where writer, doctor, and student of divinity merge?

I just finished a fellowship in medical ethics at Harvard Medical School. I was doing it this past year alongside the divinity schoolwork. It actually was kind of an opportunity for the three career paths to start to overlap, and it helped me clarify my ambitions for my fellowship research project here at UCSF.

Q. Many of your stories take place in hospitals and deal with doctors, patients, sickness, death, and specifically with children and pediatrics. Why do you think you ended up here in your writing?

Probably because medicine has occupied such a large portion of my life. The first novel was written during medical school, the second during residency, and the third during fellowship training. I think as I move forward out of medical training my imagination will be able to move out of the hospital, and the world of medicine, a little more.

Q. Do you see yourself as a clinician, researcher or both?

Both, although I discovered early on that I have little talent for bench research. I’m a disaster in the lab. The research I’m doing for my fellowship project has a qualitative bent, and I will probably remain at play in qualitative or mixed-methods sandboxes for the rest of my career. My research is a mixed-methods project – both qualitative and quantitative, looking at what it’s like for the parents of young patients to participate in phase-III clinical research trials with us in pediatric oncology.

Q. You’re bi-coastal now, commuting between San Francisco and Boston, where your partner, also a pediatrician, lives. How is this going, and do you look forward to staying in one place for a while?

I’ll get to stay in Boston for the next few months and will finally finish up school. I’ll be coming back to SF a few times for work on my research project. The bi-coastal thing is not ideal, and I’m looking forward to reducing travel time drastically.

Q. Is your dream or goal to keep writing and keep doctoring, side-by-side, for as long as it works or feels comfortable?

I can’t imagine not doing one or the other. Back in medical school when someone asked me which profession I’d rather give up, if I had to, I said it was like being asked which eye I’d prefer to have gouged out with a spoon.

Q. Has anything changed for you since being named one of the New Yorker’s “20 under 40”? What is the significance of this to you?

Lists are problematic whether you land on them or off of them, but I’m very grateful to have been chosen. It’s neat how many people in the hospital noticed. Some colleagues in the pediatric intensive care unit all started staring rather intently at me the other day, and when I asked them if I’d done something wrong they said, no. They were watching me because the New Yorker said to watch me. I thought that was hilarious.

Q. Any advice for busy medical professionals or medical students with artistic as well as medical interests or aspirations?

I think finding a place that puts some sort of value on that kind of mixed-enterprise is important. I’ve told folks before that UCSF is a great place to try to pursue artistic interests that can complement one’s work in medicine, and I still think that’s very true.