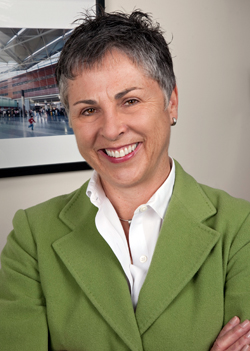 “Strengthening our strategic communication and advocacy efforts are key priorities,” Desmond-Hellmann said. “I am grateful for Barbara’s willingness to assume additional leadership responsibilities and I know she will continue to assist all of us in driving our important public awareness initiatives, which are, particularly in these times, essential in promoting the campus’s mission and our priorities.”

French’s appointment was approved by the UC Board of Regents at its meeting on May 20. She will continue to report directly to the chancellor.

French oversees the departments of Public Affairs, which is charged with communicating news and information about UCSF to internal and external audiences, and Community & Governmental Relations, which fosters relationships with neighbors, community groups, business leaders and government officials. She also oversees the UCSF Center for Gender Equity and the LGBT Resource Center, which provide advocacy, education and support for men, women and the lesbian, gay, bisexual and transgender communities.

“I can’t imagine a better time to be charged with leading strategic communications and advocacy for UCSF,” French said. “The mandate is clear: increase awareness of UCSF’s excellence in patient care, discovery and education and elevate the understanding of UCSF’s accomplishments and contributions.”

French said the mandate can be met by sharply focusing on how UCSF is making a difference and by leveraging resources across campus and the medical center to ensure a consistent, powerful and unified message.

Under French’s guidance, UCSF adopted its advancing health worldwide™ mission and incorporated that tagline into its logo and identity. During her tenure, the Public Affairs department has successfully teamed with University Development and Alumni Relations on numerous projects to raise the visibility of UCSF and its accomplishments, including the launching of the UCSF Helen Diller Family Comprehensive Cancer Center and the announcement of a $125 million gift to the new Mission Bay medical center from Charles F. Feeney, founding chairman of The Atlantic Philanthropies. Public Affairs also expanded the breadth and reach of UCSF’s main web portal, UCSF.edu., which attracts more than 600,000 visits a month.

French has also encouraged partnerships with other campus units to advance key UCSF initiatives. Partnering with Campus Planning, UCSF Medical Center and UCSF Children’s Hospital, the Community & Governmental Relations unit last year successfully garnered unanimous support from the San Francisco Board of Supervisors for approval of the operation of a helipad at the site of UCSF Medical Center at Mission Bay, which is scheduled to open in 2014. Campus Planning and Real Estate also worked closely with Community & Government Relations on a year-long planning process to build community and University consensus on UCSF’s development around the Mission Bay campus.

The Center for Gender Equity (CGE) has expanded its collaboration across UCSF and across the UC system to provide advocacy, education and support services to both women and men. Most recently, CGE hosted the 4th annual UC Diversity Pipeline Initiative to address issues facing minority women students who are under-represented in the health professions and may be interested in pursuing future academic careers.

In addition, the LGBT Resource Center has continued to build upon its pioneering reputation. The center presented the nation’s first LGBT training conferences for graduate health students and this fall, with support from leading foundations, will host the first National Summit on LGBT Issues in Medical Education. The center also played a key role in the UCSF Medical Center becoming the only hospital in the country to have received a perfect score on the LGBT Healthcare Equality Index for three consecutive years.

A native of the Bay Area, French was the founder and chief executive officer of her own public affairs consulting firm, Reputation. Prior to starting her own firm, French was an executive vice president at Solem & Associates, a well-established public relations and public affairs firm in San Francisco. She also worked as a business editor at the San Francisco Examiner, an editor and reporter at Connecticut’s Hartford Courant and a reporter for the San Jose Mercury News.

French lives in Mill Valley with her life partner and her two children.