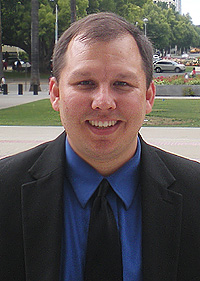 A University of California Board of Regents’ special committee nominated Alfredo Mireles Jr., a UCSF graduate student, as Student Regent for 2011-2012.

The full board of Regents will consider the committee’s recommendation at its meeting July 13-15. If approved, Mireles would become the 37th Student Regent since the position was established in 1975.

Mireles would then serve as the Student Regent-designate for the coming year and be able to participate in all deliberations, but not vote until July 2011, when his one-year term would begin.

Mireles, a first-generation college graduate, is a master’s candidate in health policy at UCSF, where he founded the San Francisco Health Policy Advocacy Club and served as the UC Students Association Legislative Liaison for the UCSF Graduate Student Association. He also served as a member of the Student Health Insurance Advisory Committee.

Joseph Castro, PhD, vice provost for Student Academic Affairs and special assistant to the chancellor at UCSF, enthusiastically supports the nomination of Mireles as a Student Regent. Castro first met Mireles when he convened a group of students to design a student leadership development program. He has been impressed with him ever since.

“Alfredo exemplifies the best things about the University of California; his story illustrates that the University of California is an egalitarian system that grants anyone with the ability and desire the opportunity to succeed,” Castro wrote in a letter in support of his nomination. “With his diverse set of experiences and interests and his drive and determination, Alfredo has no foreseeable limitation on how far he can succeed.”

Mireles is currently spending a year as a Jessie Marvin Unruh Assembly Fellow and as an Albert Schweitzer Fellow, working on a community service project that helps mentally ill patients stay out of the hospital by giving them the resources they need to maintain their treatment and function at their highest possible level.

He acknowledged his distinctive place among Student Regents: “As the first UCSF student to be selected in close to 20 years, I will be able to highlight both the phenomenal work UCSF does, as well as the unique needs and issues” of the University.

The Student Regent for 2010-2011 is Jesse Cheng, a UC Irvine undergraduate student pursuing a degree in Asian American studies.

This year, 54 students from all 10 UC campuses applied for the position. In accordance with their policy, the regents’ committee interviewed three finalists, whose names were submitted by the UC Students Association after its interviews with the 10 semifinalists.

UCSF Today sent a note of congratulations to Mireles this week and asked him to answer the following questions.

Q: Why did you seek selection to become a student regent?

A: I thought I had the experiences and connnections to multiple communities to be effective in the position and represent students from all backgrounds well. I am a first-generation college graduate, I have been an undergraduate, professional, and graduate student. I have worked in the State Capitol as a legislative aide on health and higher education policy. I also have worked in two UC-affiliated hospitals, been involved in a myriad of campus orginzations, and have relationships with a lot of the student leaders throughout the UC system.

Also, I believe 2010 is the year of health care, and as a health policy graduate student, I wanted to be part of actual policy making performed by the Regents. For instance, we are going to be helping implement federal health reform, are looking to potentially take over the health care delivery at the state prisons, and are preparing to reestablish Martin Luther King, Jr. Hospital in Southern Los Angeles to provide health care to the underserved.

Q: What issues are critical to bring to the board on behalf of students?

A: 1. Campus climate: Students from all backgrounds need to feel welcome at UC campuses.
2. Fees: We must continue to always make school affordable and accessible.
3. Health: As a UCSF student, I am happy I get to bring attention to all the amazing work the UC is doing on health-related issues.

Q: What did your internship in Sacramento entail?

A:I am in a program called the Jessie Marvin Unruh Assembly Fellowship. I work as a full-time legislative aide and staff my boss on health, higher education, and human services. My work entails attending committee briefings, attending hearings, meeting with lobbysists and advocates, and briefing the Assemblymember on pressing issues.

It is an eleven-month program that is comprised of graduate seminars on California State government and a full-time legislative internship. The program is over 50 years old, and former Assembly Fellows have gone on to be Assemblymembers, State Senators, and Congressmembers.

Q: What are your plans following education at UCSF?

A:I have worked as a pyschiatric nurse at San Francisco General Hospital for 2.5 years prior to taking the Fellowship in Sacramento, and have a deep-rooted passion to work with the underserved. Thus, after my term as student Regent, I want to continue working with the underserved in some capacity either on the clinical and/or policy level.

Q: Where were you born and raised?

A: I was born and raised in Long Beach, CA. I am the oldest of four brothers and come from a bi-cultural family. I am an avid Dodgers and Lakers fan.

I went to UC Berkeley as an undergraduate and got a BA degree in sociology. I then went through an accelerated second bachelor’s degree (BS) at Johns Hopkins University, where I became a Registered Nurse, and now study health policy at UCSF.

Mireles may be contacted via email.