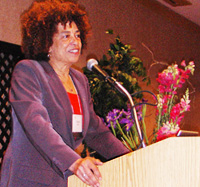 The UCSF community is invited to hear outspoken social activist and scholar Angela Davis, who will address “How Does Change Happen?” to mark the 30th anniversary of the Center for Gender Equity.

Davis, professor emerita at UC Santa Cruz, will speak at UCSF on Thursday, April 15, from 6:30 to 7:30 p.m., in Cole Hall, Medical Sciences Building, 513 Parnassus Ave. See map [PDF]. Tickets are $15 and all proceeds benefit programs offered by the Center for Gender Equity.

As an activist and university professor, Davis has dedicated her life to social justice—working outside and within the system to create change. Davis will share her insights into building a community of women with a strong voice that is sustainable, effective and transformative.

“Angela Davis has devoted her life to advocating for social justice through her activism and scholarship,” says Amy Levine, executive director of the Center for Gender Equity. “Her willingness to take risks and her courage to stand up for her beliefs is her legacy—which has led to a long track record of creating positive change. It is our privilege to bring her to UCSF to support and celebrate the Center for Gender Equity’s 30-year history of providing programs and trainings that empower and advance women.”

The Center for Gender Equity began as the Rape Prevention Education Program before expanding to become the Women’s Resource Center. This ever-evolving center has become an integral part of UCSF’s teaching, research, patient care and public service mission. Its programs promote professional development, inform the community about health and wellness and empower women through training and workshops, including self defense.

Born on Jan. 26, 1944, Davis first began to push for change in her hometown of Birmingham, Alabama, where at age 11 she organized an interracial discussion group in her church amid Jim Crow laws, which led to segregation by race until fully repealed by the Civil Rights Act of 1964. But far from being a “bizarre relic of the past,” Davis says that racism and a lack of understanding and appreciation for diversity of all kinds continue to exist across the country.

Davis has been deeply involved in the nation’s quest for social justice through her activism and scholarship over the past five decades. Her work as an educator – both at the university level and in the larger public sphere – has always emphasized the importance of building communities of struggle for economic, racial, and gender equality. Davis’ teaching career has taken her to San Francisco State University, Mills College, and UC Berkeley. She also has taught at UCLA, Vassar, the Claremont Colleges, and Stanford University.

Davis joined the University of California Santa Cruz (UCSC) faculty in 1991 after serving on the San Francisco State University faculty for several years. She spent the last 15 years at UCSC, where she is now Professor Emerita of History of Consciousness, an interdisciplinary PhD program concentrating primarily on the humanities and social sciences, and of Feminist Studies.

Davis has written extensively. Her articles and essays have appeared in numerous journals and anthologies, and she is the author of eight books including “Women Race and Class”; “Angela Davis: An Autobiography”; “Women Culture Politics.”

In recent years a persistent theme of her work has been the range of social problems associated with incarceration and the generalized criminalization of those communities that are most affected by poverty and racial discrimination.  She draws upon her own experiences in the early 1970’s as a person who spent 18 months in jail and on trial, after being placed on the FBI’s “Ten Most Wanted List.”  Davis also has conducted extensive research on numerous issues related to race, gender and imprisonment. Her most recent books are “Abolition Democracy” and “Are Prisons Obsolete?”  She is now completing a book titled “Prisons and American History.”

For more information about the event, please contact Chelsea Simms or visit the UCSF Center for Gender Equity’s website.

Angela Davis: How Does Change Happen
YouTube via UCTV, October 10, 2006