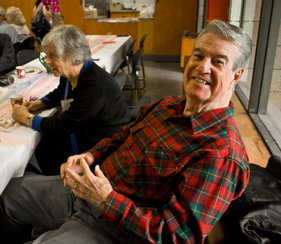 UCSF patient John Farrell sits with his wife Leana and other patients, family members and UCSF staff at a Nov. 5 event hosted by the Interstitial Lung Disease Program.

For patients suffering from the group of disorders collectively known as interstitial lung disease (ILD), the path from initial diagnosis to effective symptom management is often winding and lonely.

But through a monthly support group, clinical trials and an approach to patient care that focuses on teamwork and frequent communication, UCSF’s Interstitial Lung Disease Program is attempting to provide a sense of community to patients with extremely diverse health histories.

ILD encompasses more than 100 disorders — including hypersensitivity pneumonitis, idiopathic pulmonary fibrosis, and sarcoidosis — that cause scarring or inflammation of the lungs and gradually interfere with breathing. Some patients contract ILD after chronic exposure to toxins or pollutants such as asbestos and silica dust, but for many patients, the cause is unknown.

As a result, the diagnosis and management of ILD is often incredibly complex and requires input from a range of specialists, from radiologists to rheumatologists to transplant surgeons.

That wide variation from patient to patient leaves many feeling isolated, said Marilyn DeVetter, who was diagnosed with ILD three years ago and has been an active member of UCSF’s support group, Living Well with ILD. 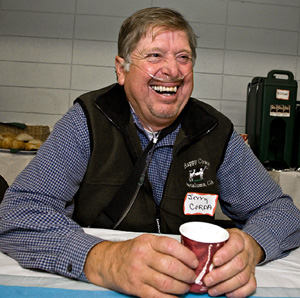 Jerry Corda, a UCSF patient with interstitial lung disease, says UCSF’s experts have helped him figure out how to better manage his condition.

“When I was diagnosed, I had a lot of questions. I was adrift in a sea of confusion and worry,” she said at a Nov. 5 patient appreciation event hosted by the UCSF ILD Program. “I came to UCSF for a consult and the people there helped me make connections. They really helped put a lot of puzzle pieces together for me and my family.”

Program director Hal Collard, MD, said he and his colleagues hope to serve as “a community of resources” for patients like DeVetter through the three arms of the program: patient care, education and research.

That emphasis on providing the best possible patient experience is central to UCSF’s mission under Chancellor Sue Desmond-Hellmann, MD, MPH, who has identified patients as the top priority during her tenure.

Jerry Corda, a UCSF ILD patient from Petaluma, said he planned to start attending support group meetings “to learn from people who have gone through the stuff” he himself has experienced since he began having severe breathing trouble nearly two years ago.

Corda has also been participating in an ongoing UCSF observational study of dyspnea, or shortness of breath, in patients with ILD, he said.

That study is one of several UCSF-based studies and clinical trials examining the benefits of novel ILD therapies. Several more are on the horizon, according to Archer Lee Eller, one of the ILD Program’s clinical research coordinators.

Treatments for ILD have so far proven largely unsuccessful, and many pose a risk of serious side effects. In the majority of patients with lung scarring, the damage is irreversible. 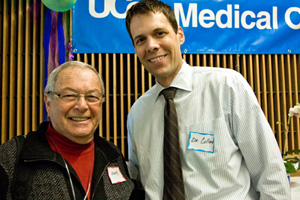 “There aren’t many known treatments out there right now,” Eller said. “But thanks to our clinical trials, we do have some options to offer our patients.”

Though ILD has changed his life dramatically, Corda said the team of experts at UCSF has helped him figure out how to manage his condition on a day-to-day basis, while continuing to do the things he loves most, such as deer hunting.

“I’m not the kind of person to get depressed; it’s just not in my genes,” he said. “I went hunting recently for the first time in a while. I had to stay in the truck, but it was still good to get out there.”