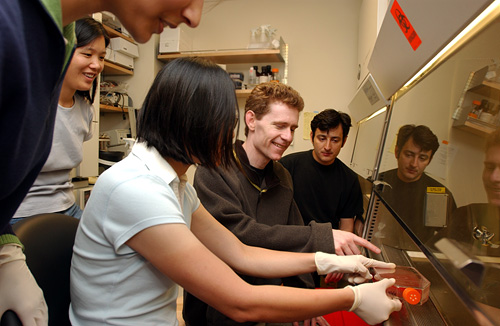 UCSF has been named the country’s second-best academic work setting, according to a 2009 survey conducted by The Scientist magazine.

The University moved up 10 spots from last year’s rankings of “Best Places to Work in Academia,” and was joined on the top tier by the UCSF-affiliated J. David Gladstone Institutes, which came in sixth. They were the only California-based institutions to place in the top 10 this year.

The magazine ranked 94 institutions from around the United States using more than 2,300 responses to a web-based survey targeted at life scientists with a permanent position in an academic, hospital, government, or research organization.

The survey asked employees to assess their working environment according to 38 criteria in eight different areas: overall job satisfaction; peers; teaching and mentoring; infrastructure and environment; pay; research resources; tenure and promotion; and management and policies.

According to respondents, UCSF’s two greatest strengths were its employees’ overall job satisfaction and their relationships with their colleagues.

“I am delighted with this honor and pleased that we were rated higher than last year, the first year we were in the top 40,” said Sally Marshall, PhD, UCSF’s vice provost of academic affairs. “I am especially proud of our faculty for rating UCSF based on our many positive aspects in these difficult economic times.”

Marshall credited the Chancellor’s Council on Faculty Life, which she chairs, with contributing to UCSF’s rise in the rankings. The council works to develop and implement measures that promote faculty welfare.

Executive Vice Chancellor and Provost A. Eugene Washington, MD, said that the leadership and support of former Chancellor J. Michael Bishop, MD, were also important to the success of UCSF’s quality-of-life improvement efforts in recent years. The UCSF Strategic Plan, released in June 2007, cited “promoting a supportive work environment” as one of the seven strategic directions to guide the University over the next decade.

“We are pleased with this recognition, but understand that we must work even harder during these stressful times to provide a supportive and effective work environment,” Washington said.

UCSF’s new Chancellor, Sue Desmond-Hellmann, MD, MPH, has pledged to do just that.

On Oct. 26, the day before the survey results were announced, Desmond-Hellmann held her first town hall meeting, in which she outlined her four top priorities. Among those, she said, was her commitment to focus on people, particularly hiring strong managers and leaders and promoting diversity across the University, to ensure that UCSF is “an environment where everyone can excel.”

UCSF School of Medicine Dean Sam Hawgood, MBBS, vice chancellor of medical affairs, said that at a time of budget cuts and economic uncertainty, UCSF’s strong performance in the rankings is a reflection of the upbeat attitude he sees daily throughout the University.

John Featherstone, PhD, dean of the UCSF School of Dentistry, said that a positive work environment and satisfied employees are directly tied to UCSF’s mission of promoting education and advancing health.

“UCSF being named as one of the very best places in U.S. academia to work is testimony that not only are we are always striving for excellence in all that we do, but also that people and environment are very important to the success of our educational programs, our research and our service to the public,” he said.

The Scientist magazine, 2009 “Best Places to Work in Academia”