UCSF Chancellor Sue Desmond-Hellmann, MD, MPH, shared her initial impressions of the University, discussed the challenges she plans to address and laid out her four chief priorities during her first town hall meeting on Oct. 26.

Looking ahead, Desmond-Hellmann says she will focus on four key priorities: patients and health, discovery, people and the business of UCSF.

Desmond-Hellmann, who became UCSF’s ninth chancellor on Aug. 3, appeared before a packed auditorium at Cole Hall for an address that was simulcast to 12 other UCSF locations.

In her first 85 days at the helm, Desmond-Hellmann says she has met with faculty, staff, students, donors and members of the community “taking in much of what UCSF is and who UCSF is.” 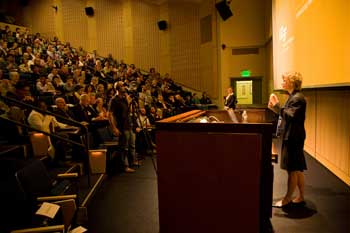 UCSF Chancellor Sue Desmond-Hellmann addresses an audience who filled Cole Hall during her first town hall meeting since taking the helm on Aug. 3.

What she observed throughout that time reinforced the first impressions she formed as a medical resident at UCSF in the 1980s, she said. A small town girl who grew as the second of seven children in Reno, Nevada, Desmond-Hellmann wanted to become a doctor to improve patients’ lives – a promise she made to herself that has propelled her along a career path as a physician, distinguished leader in cancer research, and biotechnology industry executive.

“UCSF is a vibrant, amazing, innovative university where great science is carried out and where people…want to make a difference,” she said.

Desmond-Hellmann, too, is eager to make a difference to achieve UCSF’s mission and vision, which inspired her to become chancellor.

However, she acknowledged, the University faces a number of significant challenges, including a national recession and a state budget crisis. UCSF also faces several internal hurdles, such as a lack of efficiency in the way departments and programs operate; an extremely complicated funds accounting system; and an overly complex administrative infrastructure.

To address those challenges and achieve her vision that “UCSF be transformative,” Desmond-Hellmann outlined four main priorities that she plans to focus on during her initial years as chancellor.

First and foremost, she will focus on patients and health, especially on ensuring that patients receive the absolute highest quality of care, she said. When they visit UCSF for any type of treatment, check-up or other service, patients should invariably “experience our commitment to health,” she said.

Desmond-Hellmann said she is truly passionate about UCSF’s commitment to “translating discoveries to improve lives”—a pledge that ties her first priority to her second: discovery.

“Excellence in basic [scientific] discovery is a huge part of who we are,” she said, often referring to the Nobel Prize-winning work of UCSF molecular biologist Elizabeth Blackburn, PhD.

Desmond-Hellmann’s third priority, people, will focus on hiring and cultivating strong managers and leaders. To help her chart the direction forward, she filled two leadership positions – appointing Sam Hawgood, MBBS, dean of the UCSF School of Medicine, and Carol Moss, vice chancellor for Development and Alumni Relations. Both Hawgood and Moss will play key roles in helping her achieve her No. 1 fundraising goal: to secure $600 million from the donor community to build a children’s, women’s specialty and cancer hospital complex adjacent to the existing Mission Bay biomedical campus. 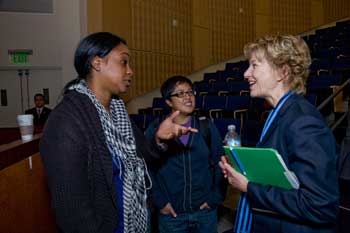 Desmond-Hellmann also says she will continue to nurture diversity — something her predecessor, Mike Bishop, MD, championed during his time as chancellor.

“For me, diversity starts with having an environment where everyone can excel,” Desmond-Hellmann said during the question-and-answer portion of the talk.

Desmond-Hellmann’s final top priority, business, stems from the reality that UCSF cannot accomplish its goals in education, research or patient care without the necessary funds and a shift toward better business practices, she said.

She said she plans to translate the campuswide strategic plan into a business plan; diversify UCSF’s sources of revenue; advocate for the University at the state and federal level; and encourage more partnerships with industry.

“But I will make sure our values and who we are as a University don’t suffer as a consequence,” she assured the audience, referring in part, to conflict of interest.

Desmond-Hellmann also has called for the hiring of a chief business officer for UCSF—a new position that she hopes to fill by year’s end—who will be charged with reviewing the University’s business goals and objectives and making recommendations on strategies to increase efficiency, eliminate redundancies and invest resources into programs that are essential to achieving UCSF’s mission of “advancing health worldwide.”

One money-saving approach she won’t be adopting: extending the current campuswide furloughs, which were approved by the UC Regents in July before Desmond-Hellmann arrived at UCSF.

“Furloughs will end in the summer of 2010,” she promised, adding that in her opinion, they were a “quick fix” but not appropriate for UCSF in the long term.

Acknowledging that “many people don’t know what a chancellor does,” Desmond-Hellmann said she believed her job was “to ensure UCSF has the talents and funds to deliver on our mission,” and to “make tough decisions.”

She described herself as “action-oriented” and promised not to become cynical, despite the difficult road ahead. Desmond-Hellmann also pledged to keep the lines of communication open as she works to implement her ideas and proposed changes.

Lisa Cisneros contributed to this report.