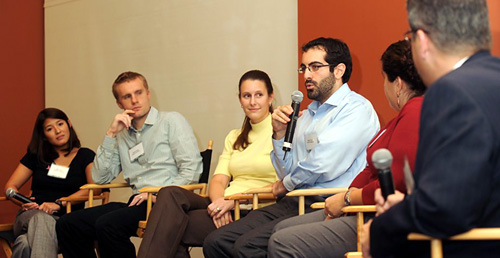 Five of UCSF’s most accomplished student leaders gathered at Mission Bay recently to discuss what drew them to the University, the importance of interdisciplinary collaboration, and how they are coping with rising tuition and looming debt.

The Oct. 13 event, “Developing the Next Generation of Leaders in the Health Professions,” was hosted by the UCSF Alumni Association and sponsored by the Office of Gift and Endowment Planning. The theme alluded to a key objective of the UCSF Strategic Plan: fostering “the world’s future leaders in health care delivery, research and education.”

The panelists represented each of UCSF’s four professional schools and the Graduate Division, and the discussion was led by Joseph Castro, PhD, vice provost of Student Academic Affairs.
All of the students said UCSF’s reputation as a world-class academic institution played a role in their decision to apply, but many other factors contributed as well.

“UCSF is a really rare combination of an excellent, highly regarded school with a real commitment to serving the underserved,” said third-year medical student Hugo Torres, who hopes to return to his native Los Angeles after graduation to practice primary care and work to improve public health.

Julie Hunkapiller, a fifth-year PhD candidate in the Biomedical Sciences Graduate Program, said she was both “surprised and impressed” by the UCSF faculty’s willingness to mentor students and the amount of one-on-one attention that is available.

Second-year pharmacy student Marnie Noel was introduced to UCSF not as a prospective student, but as the daughter of a patient. Her mother received treatment for Parkinson’s disease at UCSF in 2005 and Noel recalls being “completely blown away” by the care her mother received and the expertise of the team of health professionals, which included clinical pharmacists.

“I had never seen pharmacists in a clinical setting before,” said Noel, who studied psychology in college and only started considering pharmacy as a career a couple of years ago. “UCSF seemed like this impossible dream. I put it on a pedestal.”

Now that the dream has become reality for Noel and the four other student panelists, they have all worked hard to improve both the campus environment and the surrounding community. Many of those efforts have involved students from multiple schools. The panelists said they hoped to see inter-professional collaboration become an increasingly routine part of the UCSF experience.

“We’re all used to our own way of doing things and looking at things, so it’s really interesting and helpful to hear other perspectives,” said Alyssa Abraham, who is pursuing her PhD in the School of Nursing’s Department of Family Health Care Nursing.

In addition to eye-opening experiences and a top-quality education, UCSF has also served up its share of challenges to the students — most notably in the form of steadily increasing professional student fees and debt.

For the first time in the University’s history, the 2009 graduates of the School of Medicine incurred a higher average educational loan debt than Stanford University’s 2009 School of Medicine graduates, according to the Office of Student Academic Affairs. Loan indebtedness among UCSF graduates has nearly doubled in the schools of medicine, dentistry and pharmacy between 2001 and 2009.

“I will graduate with a huge, huge amount of debt,” said Torres, whose tuition is being paid for through a combination of scholarship support and loans.

What’s more, Torres noted, his preferred field, primary care, pays significantly less than most other specialties — a reality that has led to a nationwide shortage in primary care physicians.

Not only has the debt crisis in medical education harmed current students and recent graduates, but it threatens to exclude promising future students from entering the health professions, said Daniel Hardy, a third-year dental student who relies on loans, a small scholarship and his wife’s salary to cover his education.

“In order to attract the best to UC, we really need to provide some sort of compensation for them,” he said.

UCSF has received some good news lately on the financial front, Castro said. In August, the U.S. Department of Health and Human Services (HHS) announced that UCSF would receive $159,000 in federal economic stimulus funds for student financial aid in the 2009-2010 academic year. The scholarships were divided among incoming students in the schools of medicine, dentistry and pharmacy.

In addition, in July the Graduate Division received nearly $300,000 in stimulus funds for an existing fellowship program that provides intensive research and teaching experience to postdoctoral scholars from underrepresented backgrounds.