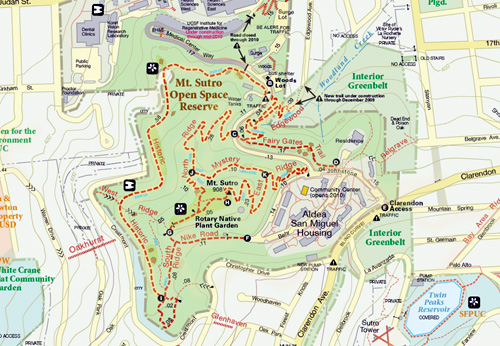 UCSF is inviting members of the community to participate in discussions about a proposed fire mitigation project, which will reduce the risk of a fast-moving, high-intensity wildfire atop Mount Sutro.

A walking tour of Mount Sutro is scheduled for noon on Saturday, Oct. 24. Those who want to join the tour should meet at the intersection of Johnstone Drive and Behr Avenue.

The Mount Sutro Open Space Reserve is a largely undeveloped area of roughly 61 acres of land that is owned by UCSF. Originally called “Mount Parnassus,” the 904-foot hill was once covered with low brush and chaparral. In 1886, Mayor Adolph Sutro arranged for the planting of thousands of trees to celebrate San Francisco’s first Arbor Day. The non-native, fast-growing blue gum eucalyptus soon dominated the land and became what is now known as Sutro Forest. Over the next century, the once open hillside turned into dense groves of eucalyptus mixed with elderberry, blackberry, mugwort, soaproot, osoberry, and ferns.

The UC Regents have repeatedly asserted their commitment to protecting the Mount Sutro Open Space Reserve from development. UCSF and members of the community are working together to continue restoring and rejuvenating this wilderness.

UCSF is proposing to selectively reduce the amount of highly combustible materials that can burn in these two areas:

UCSF is seeking funding for these projects through the Federal Emergency Management Agency (FEMA), the US agency that sponsors disaster prevention and preparedness projects, including reducing wildfires.

In addition to reducing the risk of wildfires, the goals of these projects are to improve the health and safety of the remaining trees, provide easier access for fire equipment and personnel in the event of a wildfire, increase biodiversity to better resist wind damage and decrease potential for insect infestation and to create a more attractive and less hazardous environment for the public.

Working with the Community

In September 2001, UCSF published the Mount Sutro Open Space Reserve Management Plan to serve as a guide to the long-term restoration and management of the land. As a first step in implementing the plan, UCSF and community volunteers planted the clearing at the summit with coastal scrub native plants funded by the Rotary Club of San Francisco. Rotary Meadow, as it is renamed, has been planted in two phases.

Also assisting UCSF in the upkeep of the reserve are the UCSF Community Advisory Group (CAG) and the Mount Sutro Stewards, a grassroots group founded by Craig Dawson, a CAG member who grew up on the south side of Mount Sutro and now works with UCSF to engage the community in the care and appreciation of the wilderness area.

In May 2009, UCSF hosted a community meeting to discuss proposals for the two projects for reducing the risk of fire on Mount Sutro. During that meeting, participants raised a number of issues regarding the FEMA grants and the potential impact of the mitigation work on the area and the neighbors.

As a result of the substantial community interest in these proposed projects, UCSF has postponed its planned implementation of the projects and instead is conducting additional community meetings and site walks to get more public input.

“UCSF is committed to a thorough discussion with the neighbors and will use this feedback to help shape how this project will be implemented,” says Barbara J. French, associate vice chancellor of University Relations. “I want to underscore UCSF’s intention of working with the community to ensure we fully understand and address neighborhood concerns.”

To comply with the National Environmental Policy Act, FEMA is preparing a Draft Environmental Assessment (DEA) to evaluate and disclose the potential environmental impacts of the two projects and alternatives. The DEA will be available for public review.

After the public process, UCSF officials will decide how to proceed based on community input.

Anyone interested in more information about projects in the reserve should contact Barbara Bagot-López, associate director of Community and Governmental Relations, at [email protected] or 415/476-8318.