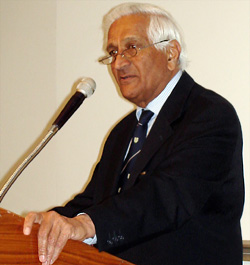 As scientific advances move us closer to customized, gene-based medical care, governments and health experts around the world are preparing for the shift by confronting critical issues such as patient privacy, workforce training and the proliferation of do-it-yourself DNA tests.

On Sept. 10, Lord Naren Patel, a member of Britain’s House of Lords and a renowned clinician and researcher, came to UCSF to discuss his country’s efforts to address both real and potential barriers to the translation of genomic innovations into meaningful improvements in patient care.

Patel, a member of the House of Lords Science and Technology Committee, recently chaired an extensive government inquiry into genomic medicine, which focuses on the genetic basis of diseases and how that information can lead to more targeted, personalized treatments. The committee’s inquiry included a June 2008 trip to the National Institutes of Health (NIH) in Maryland to hear from a wide range of experts in this rapidly evolving field.

The resulting report, “Genomic Medicine,” published in July, included a series of recommendations related to the regulation of genetic testing, the structure of Britain’s National Health Service (NHS), data security, and numerous other issues.

Patel acknowledged that other countries still lead the way in certain areas—such as the United States’s leadership in biotechnology and pharmacogenomics, the study of how an individual’s genetic inheritance affects the body’s response to drugs.

However, he said, Britain does have at least one enviable research tool at its disposal: a database of the health records of every UK resident since the NHS was launched in 1948.

“Our nationalized health service allows us access to a huge wealth of patient information,” he said in his talk at UCSF, which was sponsored by the University’s Center for Translational and Policy Research on Personalized Medicine (TRANSPERS). “We haven’t yet cashed in on this huge resource we have available to us.”

Many of the challenges Patel and his colleagues addressed in their report were not specific to the UK, he noted, including patients’ legitimate concerns about how their genetic data might be used by the insurance industry and other outside parties.

“There is a real need for data protection when it comes to using genetic information,” he said. “At the same time, we need to make sure regulations offer patients protection without being too bureaucratic or hindering valuable research.”

In addition, he said, doctors and nurses throughout the world will have to be adequately trained to perform and interpret genetic tests.

“What we’re concerned about is that people would pay money to have these tests done, but may not fully understand the results or risks without appropriate counseling being available,” Patel said, adding that he and members of his committee have encouraged the UK government to work with genetic testing companies on developing a voluntary code of practice — an effort that is already underway.

This type of collaboration between industry and government is vital to promoting advances in genomic medicine and preventing potential problems, and the teamwork must extend into the academic and non-profit sectors as well, said Kathryn Phillips, PhD, the TRANSPERS Center’s founder, director and principal investigator.

“A lot of the work the UK is doing relates to the work we’re doing at the TRANSPERS Center,” Phillips said at the Sept. 10 talk.

The TRANSPERS Center was launched in 2008 to explore questions of access, utilization, cost-effectiveness, and preferences when it comes to personalized medicine, and to bring together stakeholders from academia, industry and government.

Through its work, the center aims to speed the translation of new personalized medicine technologies into clinical practice and policy — a key objective of UCSF’s campuswide strategic plan.

Patel has been a member of the Science and Technology Committee since 1999 and is also chairman of the United Kingdom Stem Cell Network and the National Patient Safety Agency of the UK. An expert in high-risk obstetrics, he currently serves as chancellor of the University of Dundee, one of the UK’s top medical schools and scientific research institutions.

Patel’s talk at UCSF was co-hosted by the UK Science and Innovation Network, which works to build strong links between the UK and the US in order to advance science.