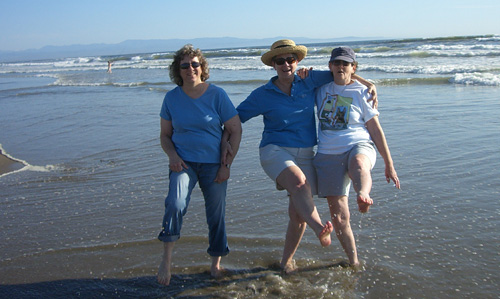 Over the past 30 years, Karen Rago, RN, has interacted with thousands of transplant patients and has watched organ transplantation evolve from a risky, often short-term solution into a procedure that can offer decades of greatly improved health.

But despite the huge role transplants have played in her professional life, they stayed far removed from her personal life — until recently.

“For so long, the thought that one of my family members would need a transplant never crossed my mind,” said Rago, executive director of UCSF service lines and the UCSF Heart and Vascular Center.

All of that changed a few years ago when her younger sister Kay Roberts, a longtime smoker, began having severe lung problems after a bout with pneumonia. Roberts was soon cycling in and out of the hospital and had to leave her job as a pre-school teacher in Atlanta.

“Eventually, her lung function was down to about 25 percent,” Rago said. “It was so hard to watch that happen to her. I tried to talk to her about being considered for a lung transplant, but I didn’t want to push too hard.”

After quitting smoking and discussing her options further with Kerry Kumar, RN, a transplant nurse-coordinator at UCSF, Roberts agreed to be evaluated for a lung transplant at Atlanta’s Emory Transplant Center. She was found to be a suitable candidate and after a mere eight days on the transplant list, she underwent a successful double lung transplant.

It has been two years since the surgery, and Roberts is now back to work and back to taking part in an annual “girls’ getaway” trip with Rago, their other sister Barbara and their mother.

The experience has reaffirmed Rago’s support for organ donation, and she has encouraged all of her extended family members and their spouses to sign up as donors, she said.

Rago is also a driving force behind an online effort to enlist the entire UCSF community as organ donors. Today, (Sept. 14), the student group Coalition of Organ Donation Exponents (CODE), is launching a 10-week “eCampaign” to direct students, faculty and staff to the website of Donate Life California, a nonprofit organ and tissue donor registry. The campaign will run through Friday, Nov. 20.

There are currently 20,000 patients awaiting transplants in California, including 775 in San Francisco, according to Donate Life California. Every day, 18 patients die waiting for new organs.

A similar effort by CODE in April yielded 117 signups from UCSF — a higher number than all of the other regional organizations participating in the campaign, according to CODE’s leader, second-year medical student Patricia Zheng.

Zheng said she has received tremendous support for CODE’s efforts from Rago, as well as other members of the UCSF faculty and staff.

“I’ve also been amazed by the amount of dedication shown by UCSF transplant patients and their families, many of whom have been willing to share their stories to help increase awareness,” she said.

Two of those individuals, Carmen Hartono and Sharon Fong, have teamed up as outspoken advocates for the cause since the mid-1990s, when a stranger-than-fiction scenario caused their lives to be forever intertwined.

The pair’s tale—which Hartono is turning into a book—began on May 8, 1993, when Hartono’s 13-year-old son Nick fell off his bicycle while out riding with a friend near his Oakland home. A driver failed to see him lying in the road and hit him, killing him almost instantly, Hartono said.

Later, while waiting at the hospital for her husband John to arrive from an overseas trip, doctors approached Hartono about the possibility of donating Nick’s organs — something she had never really considered before that moment, she said.

“I talked to my husband about it, and to our priest, and I realized it could be a form of resurrection,” she said. “Organ donation provided a way for us to bring new life from his death; it keeps part of Nick living in others.”

Three days later, Nick’s organs were transplanted into three anonymous recipients. One of them, UCSF patient and Oakland resident Sharon Fong, had been on the list for a liver transplant for seven months after suffering for more than two decades from chronic autoimmune hepatitis, a disease in which her immune system attacked her liver and caused inflammation.

Fong said she was “shocked” to receive the call from John Roberts, MD, chief of transplant surgery at UCSF Medical Center, telling her an organ was available. After recovering from the successful surgery, Fong wrote a letter of thanks and asked the medical center staff to pass it along to the donor’s family, whose name she didn’t know.

“I received a letter back, telling me about my 13-year-old donor — a boy with a passion for music — as well as a cassette tape of songs he had composed,” Fong recalled recently.

For two years, that was the end of it. Then, in 1995, Fong’s 19-year-old daughter Stephanie died and she found herself at a meeting for bereaved parents, listening to a couple named Hartono talk about their late son, a music-lover who had died in 1993.

“Something about it just rang a bell and I started putting the pieces together,” Fong said. “But I didn’t say anything because I was trying to figure out the appropriate time to go up to them and tell them, ‘Hey, guess what?’”

The following spring, at a California Transplant Donor Network (CTDN) event in San Francisco honoring donor families, Fong saw the Hartonos from across the room and felt the timing was finally right.  She approached them and, to their immense surprise, introduced herself as the grateful recipient of Nick’s liver.

The Hartonos and Fong have been a strong presence in each other’s lives ever since, attending birthday parties and weddings and speaking out publicly in support of organ donation. And every year, they gather to honor August 2, which coincidentally is the date of both Nick’s birthday and Stephanie’s death.

“There has been so much joy amidst the sorrow, and this experience has made my life incredibly full,” Carmen Hartono said in a recent phone interview. “I am sure Nick and Stephanie have become the best of friends in heaven, watching over their families here on earth.”

Fong, a retired pharmacist, said her transplant at UCSF changed her focus and her priorities in life, and she appreciates each day her new liver has made possible.

“I am grateful to a young boy: my donor, my hero,” she said. “His legacy lives on through me, and I have a responsibility to live life to its fullest, to cherish my second chance at living.”

UCSF Medical Center is home to the country’s third-largest solid organ transplant program, and has earned national recognition for its success in converting potential donors into actual donors.

In 2008, UCSF celebrated its 45th year of transplantation, with more than 10,000 successful operations under its belt. Also that year, the UCSF Heart and Lung Transplant Program performed its 500th procedure. The program’s patient survival rates exceeded the national average in 2008, according to data from the Scientific Registry of Transplant Recipients.

In addition, the University continues to work aggressively to expand its living donor transplant program, which consists of kidney and liver transplants. The medical center is currently the second-largest center for living-donor kidney transplants in the country.

In addition to the eCampaign, on Monday, Nov. 9, CODE will present a free screening of the award-winning documentary, “D tour,” which follows musician Pat Spurgeon as he searches for a living kidney donor while touring with his band — a search that ends with a successful transplant surgery at UCSF.

Earlier that day, at another CODE event, organ donation liaison Jill Noonan, RN, will talk to UCSF students about how donors are identified and cared for after they are declared brain dead. Noonan works for CTDN, an independent organ procurement organization that UCSF helped establish in 1987.
To find out more about the CODE events or eCampaign, email [email protected].