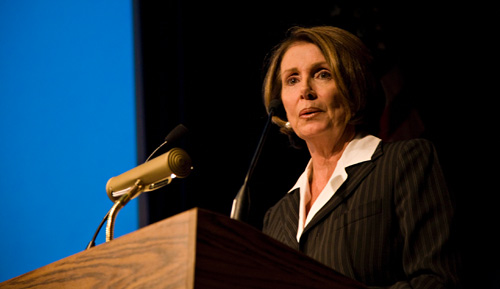 Imagine a health care system in which hospitals took responsibility for a patient’s long-term care and individuals with end-stage disease spent their final days at home, surrounded by loved ones instead of machines.

Those scenarios were among the ideas explored by a group of prominent local and national business executives, health providers and elected officials at a Sept. 2 event at UCSF’s Mission Bay campus that focused on “health care reform and economic inspiration.”

The lineup of panels and individual speeches — known as City Summit 2009 — was organized by the San Francisco Chamber of Commerce with the goal of understanding “exactly what health care reform will mean to average Americans, businesses, health care providers and insurance companies,” according to the event program.

The speakers didn’t always see eye to eye on how to fix the nation’s broken health care system, but they all agreed that significant changes were urgently needed.

“The status quo is unsustainable,” said House Speaker Nancy Pelosi, whose 10-minute speech earned her a standing ovation from the audience of several hundred business and community leaders. “We have to think in an entrepreneurial way. Let’s keep what works and change what isn’t working.”

Pelosi said that the bill that will pass the House of Representatives will include a public option health care plan.

“Again I support what the President has said,” Pelosi told the audience. “He said that he believes that the public option is the best way to keep the insurance companies honest, to increase competition in order to [achieve] four goals: lower costs, improve quality, expand coverage and retain choice.”

Much of “what isn’t working” can be tied back to cost, Pelosi and others said. The United States spent approximately $2.2 trillion on health care in 2007—nearly twice the average of other developed nations— and yet an estimated 46 million Americans remain uninsured, according to White House figures.

“It is absolutely essential that we contain cost going forward,” Pelosi said, asserting that in the coming months, the House will pass a reform measure that not only includes a public option, but also comes in at under $1 trillion over a 10-year period.

UCSF Medical Center CEO Mark Laret, who appeared on a panel to give provider perspective on health care reform, said he believes part of the reason for skyrocketing health care costs is that institutions like UCSF’s are faced with “misaligned incentives.” Under the current system, doctors and hospitals bill insurers for every individual service — a model that ends up rewarding providers simply for ordering more tests or performing more surgeries.

“Hospitals are doing too much, but doing too much is how hospitals stay afloat,” the panel’s moderator, Warren Browner, MD, MPH, said of the fee-for-service structure. Browner is the CEO of California Pacific Medical Center, which presented the Sept. 2 summit, as well as an adjunct professor of epidemiology and biostatistics at UCSF.

“The way I look at this at UCSF is that we need to change our thinking,” Laret said. “We need to be better stewards of the public dollar.”

For example, he said, when a patient arrives with a brain scan from an outside physician, instead of automatically ordering a new, on-site scan, doctors should make sure a second test will truly enable them to provide better treatment.

Money that hospitals currently spend on unnecessary or duplicative tests could be more wisely spent on patient rehabilitation and long-term care, Laret suggested.

“We need to take ownership of bending the curve of rising health care costs,” he said. 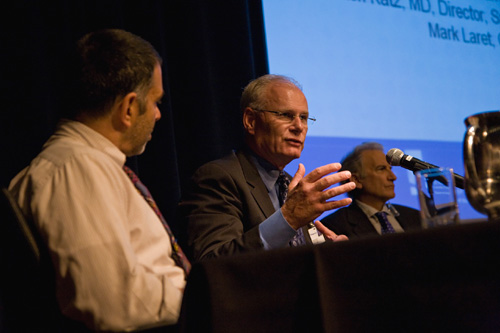 “Why would we pay someone $350,000 per year to read mammograms? It’s a visual skill, so why not hire a visual artist to do it?” Katz asked.

“Or what about palliative care?” he added, referring to specialized care that focuses on the physical, psychological and spiritual well-being of patients with incurable illnesses. “There’s an opportunity here to improve the quality of people’s passing. What if we set a goal that no one in America would die in an [intensive care unit] of end-stage disease?”

Katz acknowledged that his ideas were controversial, but he said they were examples of the kind of outside-the-box thinking that will be necessary to solve the many complex problems surrounding health care.

And even if plans for reform collapse at the federal level, there is no reason city and county governments can’t take matters into their own hands, several speakers said.

“If we don’t succeed in having federal health reform, part of our goal will be showing other counties they can do better by their uninsured,” said Katz, whose department oversees Healthy San Francisco.

The City Summit website issued a similar call to action to local health industry leaders like UCSF:  “Just as San Francisco Bay Area universities led the innovation that created the biotechnology industry…together we have the potential to initiate global health care change.”