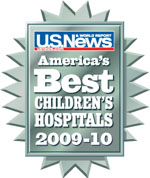 UCSF Children’s Hospital has been ranked among the nation’s best children’s hospitals in nine pediatric specialties, making it one of the top-ranked facilities in California, according to the new 2009 “America’s Best Children’s Hospitals” survey conducted by “U.S. News & World Report.” 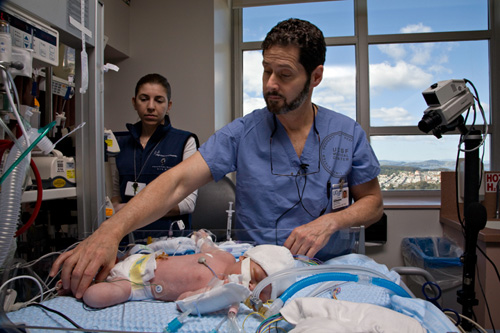 David Rowitch, MD, PhD, chief of neonatology, and Kelly Fagan, RN, left, evaluate an infant being treated for hypoxia, or a lack of oxygen at birth, with a state-of-the-art cooling blanket. Rowitch and colleagues developed the nation’s first neuro-intensive care nursery (NICN) at UCSF Children’s Hospital to offer specialized treatment for newborns who show signs of brain damage and are at risk for developing cerebral palsy, mental retardation and other cognitive disorders. Photo by Susan Merrell

UCSF Children’s Hospital was ranked in nine of the 10 specialties, and is one of only three facilities in California to earn rankings in this many areas.

According to the hospital’s executive director, Roxanne Fernandes, the rankings affirm the hospital’s expertise in providing advanced patient care to children with complex and often rare illnesses from before birth to young adulthood.

“The breadth of our rankings shows that UCSF Children’s Hospital is a truly comprehensive center that provides excellent pediatric care across the board,” Fernandes said. “We are committed to caring for the most medically complex patients and carrying out treatment with the utmost compassion.”

This is the first year that U.S. News has provided rankings for pediatric endocrine disorders and kidney disorders, and UCSF Children’s Hospital earned top ten rankings in both specialties.

The survey methodology is based on a three-part blend of reputation, outcome, and care-related measures such as nursing, advanced technology, credentialing, and other factors. Hospitals were judged based on a combination of opinions from pediatric specialists about the hospitals they would recommend for the sickest children and data gathered in a 65-page survey covering a range of important medical information.

U.S. News analyzed data on 98 children’s hospitals and ranked 56 of those in the various specialties. Ten hospitals were ranked in all 10 specialties and earned a place on the survey’s “Honor Roll.”

The complete list of children’s hospital rankings is available online at http://www.usnews.com/childrenshospitals and will be published in the August issue of “U.S. News & World Report,” available on newsstands July 21.

UCSF Children’s Hospital creates an environment where children and their families find compassionate care at the healing edge of scientific discovery, with more than 150 experts in 50 medical specialties serving patients throughout Northern California and beyond. The hospital admits about 5,000 children each year, including 2,000 babies born in the hospital.