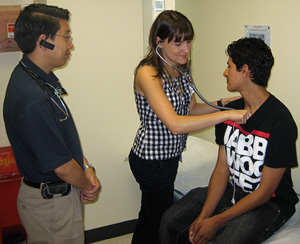 In response to the apparent increase in the number of cardiac deaths related to sports, a group of UCSF doctors and athletic trainers recently donated their time to provide free, comprehensive physical exams to 155 San Francisco high school athletes.

On May 2, nearly 60 volunteers from UCSF and the Northern California Chapter of the National Football Foundation administered rigorous screenings that extended beyond the standard sports physical to include on-site EKGs  a test that measures the electrical activity of the heart.

The event was organized by UCSF’s PlaySafe Sports Medicine Program, a seven-year-old initiative that provides education and care to student-athletes throughout the San Francisco Unified School District. The program offers twice-yearly physical exams to all district athletes, but the May event – held at the UCSF Sports Medicine Center  was the first to include free cardiac workups.

Those who had irregular results on their EKGs were provided with an ultrasound to check for more serious conditions. Nearly 10 percent of the students tested  15 out of 155  had abnormal EKG readings, but all were ultimately given a clean bill of health.

Those test results did not come as a surprise, said UCSF cardiologist Byron Lee, MD, who helped administer the EKGs.

“Our findings were in line with what others have found,” he said. “The good news is that all kids with abnormal EKGs were found to have structurally normal hearts, so every one of them was cleared to play sports.”

The overall number of cardiovascular sudden deaths among young athletes is relatively low  fewer than 100 per year in the United States, according to a 27-year analysis published in the March 3 edition of the journal Circulation. 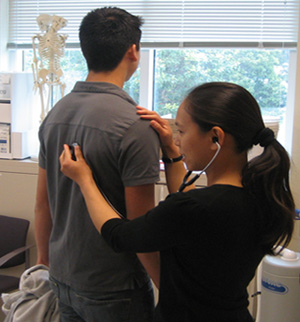 UCSF pediatrics resident Sharon Chen listens to the lungs of a young athlete at the UCSF Sports Medicine Center.

However, the most common cause of death, hypertrophic cardiomyopathy, is often detectable  and therefore preventable  using an EKG.

“The EKG is an inexpensive, fast and noninvasive test that can pick up diseases that can cause sudden death,” said Lee. “There is no doubt that widespread screening EKGs for high school athletes would save lives.”

The EKG is used regularly in prescreening athletes in Europe, but is currently not the standard in the United States. The American Heart Association recommends a physical examination and a family history questionnaire as a first-line screening, with additional tests performed only as deemed necessary by a physician.

With more than 7 million US high school students participating in sports, creating and implementing a new standard for physical exams is a daunting prospect, and one that is controversial in the sports medicine community, cautions Anthony Luke, MD, MPH, director of primary care sports medicine in the UCSF Department of Orthopaedic Surgery.

“More research needs to be done, so we don’t do unnecessary testing on people and hold them out [of sports] unnecessarily,” said Luke, who also serves as the PlaySafe program director. “The way we’re approaching things is to try to understand more about how the EKG could be best utilized and how to improve the overall physical exam for athletes.

“There are certainly athletes at risk who could benefit from cardiac screening, especially if they have risk factors such as a family member with a history of sudden death or heart abnormalities,” Luke added. “But until we learn more and learn how to use it properly, the EKG will probably remain not part of the standard exam.”

“There may have to be a few high-profile incidents out there that raise awareness and prompt people to say, ‘Why isn’t [the EKG] the standard of care?’” he said.

In the meantime, Miyamoto and his colleagues plan to continue offering free screenings for local athletes.

“Topics like this go in and out of the media,” he said of the EKG debate. “We don’t want to be reactive; we want to be proactive.”