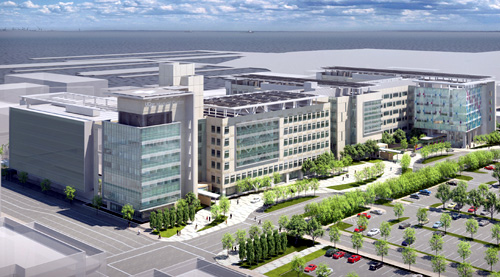 Slated to open in 2014, UCSF Medical Center at Mission Bay development has been identified as a regional priority project by the Bay Area Council Economic Institute, a key finding that will help guide the allocation of federal economic stimulus funds.

The UCSF Medical Center at Mission Bay development has been identified as a regional priority project by the Bay Area Council Economic Institute (BACEI) in a report designed to help guide the allocation of federal economic stimulus funds.

The Bay Area Economic Recovery Workplan, published June 5, is one of 12 regional plans requested by the California Business, Transportation and Housing Agency in response to the $787 billion federal economic stimulus package signed into law by President Barack Obama on Feb. 17.

California is poised to receive $31 billion in direct stimulus funds, plus an additional $20 billion that the state will compete for in Washington, DC. The recovery work plan provides a vehicle for prioritizing state projects as funding opportunities arise over the next two years.

In preparing its report, the BACEI reviewed nearly 575 proposals from cities, counties, and private and civic organizations. Selection of high-priority projects was based on their potential to “maximize geographic scope and scale, leverage resources, and achieve the maximum near  and long-term economic benefit,” according to the report.

“We didn’t want to just present a loose compendium of projects,” said Sean Randolph, BACEI president and chief executive officer. “Instead, we were tasked with helping the best to rise to the surface to ensure the greatest benefit in terms of jobs and long-term competitiveness.”

UCSF Medical Center at Mission Bay was identified as a “strategic project”  the highest classification  in the category of Science and Innovation. The 289-bed, state-of-the-art complex, which is scheduled to open in 2014, will include specialty hospitals for women, children and cancer patients. The medical center complex will be built adjacent to UCSF’s existing biomedical research campus. By colocating a medical center at Mission Bay, UCSF will be able to help transform academic medicine by translating basic science into clinical practice more rapidly to benefit patients.

“UCSF is at the forefront of translating scientific discoveries into the unique care of each patient,” says Cindy Lima, executive director of the project. “Our new hospitals at Mission Bay will further support UCSF’s hallmark  researchers and clinicians working side by side to deliver new clinical treatments to children, women and cancer patients of the Bay Area, California and beyond.”

The development of UCSF Medical Center at Mission Bay also will provide a well-trained workforce and prepare the next generation of health care practitioners for lucrative, sustainable careers in the rapidly evolving health care industry. The hospital complex itself will open up positions for hundreds of new employees, including physicians, nurses, lab technicians, maintenance workers and administrative staff.

UCSF’s expansion to Mission Bay has already provided hundreds of local residents with construction jobs through the nine-year-old UCSF Community Construction Workforce Program. The program is a voluntary hiring initiative that reaches out to area residents previously excluded from the hiring process due to lack of access to apprenticeship training or whose communities had limited historical involvement with various building trades.

In addition to creating jobs, UCSF Medical Center at Mission Bay will serve as a magnet for major players in the Bay Area’s thriving biotechnology industry. The center’s close proximity to the existing UCSF research campus at Mission Bay will facilitate the translation of laboratory innovations into new, widely available therapies   thereby creating demand for new businesses to manufacture and market those treatments.

“More than any other region of California, the nation or the world, the Bay Area is identified with innovation,” the Bay Area Economic Recovery Workplan stated. “It is in the strategic interest of the region to support research facilities, entrepreneurial activity, and educational and other programs that enable the emergence of new technologies, companies and industries, and contribute to economic competitiveness.”

The Bay Area Council Economic Institute is a public-private civic partnership of leaders from business, labor, government and higher education that works to support a competitive state and regional economy.