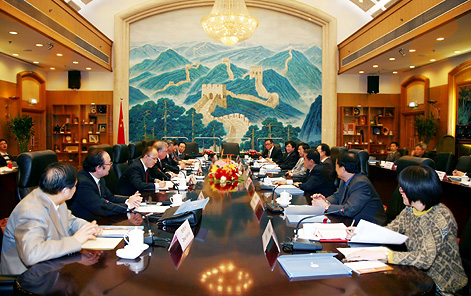 Members of the Chinese Ministry of Health, the Chinese Ophthalmological Society, the Chinese Medical Doctor Association, and the American Academy of Ophthalmology gather in Beijing on April 17 to sign a landmark agreement to standardize eye care throughout China.

After a seven-year effort led by UCSF professor Richard L. Abbott, MD, the Chinese Ministry of Health has endorsed the American Academy of Ophthalmology’s practice guidelines as the national standard for eye care in China.

The decision by the Ministry of Health, which was formalized in a signing ceremony in Beijing on April 17, marks the first time China has mandated standards of patient care and professional training for any medical specialty.

The AAO’s Preferred Practice Patterns are a series of evidence-based clinical practice guidelines that identify the characteristics and components of quality ophthalmic treatment. They had previously been endorsed by the Chinese Ophthalmological Society as the standard for China’s more than 20,000 ophthalmologists.

Abbott, the Thomas W. Boyden Health Sciences Clinical Professor of Ophthalmology at UCSF and research associate at the UCSF-affiliated Francis I. Proctor Foundation for Research in Ophthalmology, called the collaborative agreement between the AAO and the Chinese government “a landmark event.”

Abbott was one of the key participants in the Beijing signing ceremony, which also included the Chinese Medical Doctor Association.

Since 2002, he has spearheaded the AAO’s initiative to promote uniform global standards for eye care—an effort initially funded by a grant from the World Health Organization (WHO) and also supported by the National Eye Institute. China was among the first countries approached under the project.

By adopting the Preferred Practice Patterns, “China has become a model for establishing standards for quality eye care,” Abbott said. “We look forward to working with colleagues in other countries as they work on instituting uniform standards for ophthalmologists.”

Abbott will be traveling to Russia in May to introduce a similar project, he said.

Abbott, a fellow of the AAO, was awarded its Lifetime Achievement Honor Award in 2006. The AAO is the world’s largest association of eye physicians and surgeons and has more than 27,000 members worldwide.