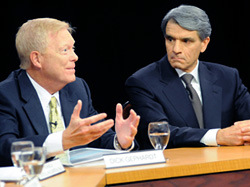 Former US House Majority Leader Richard Gephardt, makes a point while Stephen Hauser, professor and chair of the UCSF Department of Neurology, listens during the Summit Conversation on American Health Care for the 21st Century at UCSF Mission Bay on May 6.

A strong push from the Obama administration and Democratic leaders in Congress has set the wheels in motion toward national health care reform.

But there are many potholes and potential dead ends along the way to affordable, high-quality, universal health care – and to avoid them, legislators need a clear roadmap, health experts say.

A group of medical professionals, labor leaders, politicians and business executives gathered on May 6 at UCSF’s Mission Bay campus to tackle some of the toughest questions surrounding health care reform  from how to pay for a systemwide overhaul to how to safeguard patients’ privacy as electronic medical records become the standard.

Health care reform “is the test for this society in this year,” said participant and former US House Majority Leader Richard Gephardt. “The initial plan doesn’t have to solve all the problems at once; it can be incremental.”

The 12 participants in the Summit Conversation on American Health Care for the 21st Century  an event sponsored by the America’s Agenda Health Care Education Fund  easily agreed on some of the fundamental problems with the current system, including prohibitive insurance costs, insufficient focus on preventive care and poor communication between the various players.

Robert Ross, MD, president and CEO of the private health foundation the California Endowment, said that if each part of the system were linked to a traffic light  with green meaning it was functioning well, yellow meaning it was having some trouble and red meaning it was seriously flawed  there would be very few green lights.

With about $2.4 trillion in health care spending in 2007, the United States has one of the most expensive health care systems in the world and is home to an estimated 46 million uninsured individuals. Chronic diseases such as cancer, heart disease and diabetes account for 75 cents of every $1 spent on health care, according to the Centers for Disease Control and Prevention. 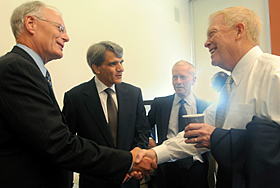 Shifting the focus of health care from reaction to prevention is key to bringing costs down and improving the overall health of the population, the summit participants said.

“We need to have a national strategic plan for chronic disease prevention,” said Ken Thorpe, PhD, executive director of the Partnership to Fight Chronic Disease and a former deputy assistant secretary of the US Department of Health and Human Services. “I’m not just talking about insurance reform. We need to be asking, ‘What can we do at the school level? What can we do at the community level?’”

“Prevention, to a large extent, requires actions by the patients themselves,” added William J. Rutter, PhD, UCSF’s Herzstein Professor of Biochemistry emeritus and chairman and CEO of Synergenics LLC.

Rutter and others voiced support for more consumer-friendly health information and increased use of technology to make doctor-patient interactions more convenient and more in line with how patients communicate and seek out information in other areas of their lives.

Technology also has the ability to transform the way doctors and other health care providers communicate with each other, the summit participants noted.

President Obama has advocated so-called eHealth initiatives, and his federal economic stimulus package included $19.2 billion to help speed up the transition from paper to electronic health records, a move that will help minimize medical errors.

“There’s finally leadership on the federal level to get this done,” Thorpe said. “The entire process of how care is provided in a doctor’s office is different with this technology.”

However, others cautioned, patient support will be crucial to the success of electronic health records, and an individual’s privacy must be guaranteed. There must also be standards for interoperability, so that different systems are compatible with each other, they said.

“We need a common language across medical information systems,” said Stephen Hauser, MD, professor and chair of the UCSF Department of Neurology, who hosted the event.

Better integration must start at the local level first, Hauser said. For example, while UCSF’s own campuses and affiliated sites are electronically compatible, UCSF and its sister universities throughout the state are not, he said.

Of course, for every new idea or approach discussed at the summit, there is an accompanying cost to the American taxpayer.

Rather than avoiding the unpopular question of “How much?”, politicians and policymakers should start talking openly about what it will cost to create a working system that serves all individuals, Gephardt said.

“We’re all paying for this every day already,” he said of the ballooning cost of health care. “Politicians don’t want to face ‘Who pays?’ because it’s currently hidden. Putting it out in the open creates political problems.”

Gephardt expressed confidence that a slow and steady approach to reform would succeed where past attempts have failed.

UCSF Medical Center CEO Mark Laret, who kicked off the event, said he too sees an opportunity ripe for the taking.

“The timeliness of this discussion could not be better,” Laret said. “I’m very optimistic that this is our moment in time to make some fundamental changes in our health care delivery system.”

For its part, UCSF is working toward the vision of delivering the highest-quality, patient-centered care, as outlined in the UCSF Strategic Plan. Released in June 2007, the plan also calls for improving access to care and to set the standard for patient safety.

The May 6 event at UCSF was the fourth in a series of 10 planned summit conversations in cities throughout the country. The Washington, DC-based America’s Agenda promotes affordable, high-quality health care for all Americans through education, policy development, leadership training and research.

In addition to Hauser and Rutter, the group of participants included another member of the UCSF faculty: Mitch Katz, MD, a clinical professor of medicine and of epidemiology and biostatistics and San Francisco’s public health director.