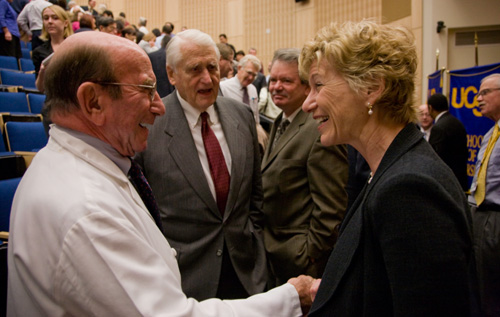 Greeting Chancellor-elect Susan Desmond-Hellmann at UCSF on May 8, are, from left, Melvin Grumbach, MD, chair of the Department of Pediatrics from 1966 to 1986 and commonly recognized as the father of modern pediatrics at UCSF, and Lloyd Hollingsworth “Holly” Smith Jr., MD, who was chair of the Department of Medicine at the time when Desmond-Hellmann was accepted as a medical resident. Steve Barclay, senior vice chancellor, stands behind them.

As UCSF’s first woman chancellor and the first to come to the post from an extensive private sector career, Susan Desmond-Hellmann, MD, MPH, will be breaking new ground when she takes the helm of the health sciences university on August 3.

But she also will be on familiar turf, she said. It’s a homecoming to the university that helped shape her, both personally and professionally, and to the San Francisco neighborhood where her father’s family first settled when they immigrated to the United States. Her grandmother worked as an upstairs maid in a house just a few blocks away from UCSF’s Parnassus campus, she said. Her grandfather was a detective for the San Francisco Police Department and her uncle Tom still lives nearby.

“You have to forgive me for being a little bit sentimental,” the accomplished physician, cancer researcher and former biotechnology executive told a packed crowd of UCSF faculty, staff and students at a meet-and-greet event Friday morning. “This place not only changed my life, but [it is] where my dad’s family came from Ireland and where he grew up.”

Desmond-Hellmann, 51, who met her husband and completed her clinical training at UCSF and then served as an assistant professor of hematology-oncology, said she will strive as chancellor to preserve and augment UCSF’s many existing strengths.

“My mission is to make sure the spirit of innovation, excellence and discovery [at UCSF] continues to flourish,” she told the UC Regents on May 7 after receiving their unanimous vote of approval.

When she arrived on campus on Friday  27 years after she began her residency at UCSF  Desmond-Hellmann was greeted with hugs and handshakes by many familiar faces, some of whom said they were thrilled, but not surprised, to see her return to assume such a prestigious position.

Desmond-Hellmann was a pioneer from the very start: She was the first student admitted to UCSF from the medical program at the University of Nevada, Reno, according to Lloyd Hollingsworth “Holly” Smith Jr., MD, who was chair of the Department of Medicine at the time.

“We thought, ‘Well, we’ll take a chance,’” said Smith, associate dean emeritus, on Friday. “Right away, it was clear she had an intrinsic ability, a wonderful personality and a deep commitment to health care. She rose to the very top of the department.”

Words to Live By

UCSF Chancellor-elect Susan Desmond-Hellmann today offered three quotes that she says are part of her philosophy of life.
“Imagine what’s possible for patients” is a rallying cry that guided her efforts during her 14-year career at Genentech, where she brought drugs to market to treat a range of cancers.

“Every employee deserves a good manager.” Desmond-Hellmann believes that all employees need to know what is expected of them, how they can improve and what their personal connection is to the overall mission of UCSF. “I define my success by the success of others,” she said.

“If we did all the things we are capable of doing, we would literally astound ourselves” is her favorite quote from American inventor and businessman Thomas Edison.

The promise Desmond-Hellmann showed as a young physician at UCSF was borne out as she explored other parts of the world. She spent two years with her husband  Nicholas Hellmann, MD, now executive vice president of medical and scientific affairs at the Elizabeth Glaser Pediatric AIDS Foundation  as a visiting faculty member at the Uganda Cancer Institute, and branched out into the private sector, joining the staff of biotechnology giant Genentech as a clinical scientist in 1995.

She was named chief medical officer at Genentech in 1996 and took over as president of product development in 2004, a position she held until May 1.

That diverse background makes Desmond-Hellmann an ideal choice at a time of uncertainty and opportunity for UCSF, said UC President Mark G. Yudof  a time when the UC system faces potentially extensive budget cuts, but also when a new administration in Washington, DC, has pledged increased support for scientific and medical research.

Desmond-Hellmann “will lead the clinical enterprise at UCSF to new heights of service,” Yudof told his fellow UC Regents board members on May 7. “She will be a great leader to the internal community and a great ambassador to the external community.”

For her part, Desmond-Hellmann said she views the chancellorship as an “enormous challenge,” but she said her top two priorities are to surround herself with “a great top team” of administrators and to preserve the fiscal health of the University and the quality of its research and patient care.

Desmond-Hellmann will replace Chancellor Mike Bishop, MD, who became UCSF’s chancellor in 1998, and she said she hopes to continue his legacy of commitment to diversity.

As for how her own appointment contributes to the image of a more diverse UCSF, the chancellor-elect said she has mixed feelings about being singled out for her gender or any other characteristic.

“I want to be great  not a great woman, a great scientist or a great physician,” she said at a May 7 press conference.

However, she added, if her accomplishments serve to inspire even one person to dream big, “I’m happy to serve as a role model.”

Outgoing UC Regents Chairman Richard Blum stressed that while Desmond-Hellmann’s appointment as chancellor is an important and exciting first for UCSF, “the reason we hired her had little to do with the fact that she’s a woman.”

Instead, he said, she will contribute valuable insights gleaned from her many years on the cutting edge of biomedical research and drug development. “She has her eye on the future of where medicine can go,” Blum said Friday, which he described as a “very happy day.”

Yudof said Friday that Desmond-Hellmann will “engage in innovation, offer alternatives and think differently about problems.”

“Don’t worry about these unrealistic expectations,” he told her Friday, affecting a mock-serious tone. “You’ll be held to all of them.”

Desmond-Hellmann, who on May 7 heard the Regents debate and then vote to raise fees for students, is aware of the many challenges ahead in a tough economy. “I don’t come in naïve. I am an optimist, but I know how challenging things are.” She said she hopes to create “an environment that brings out the best in people.”

“I am really honored and humbled by the opportunity to be your next chancellor,” she said.