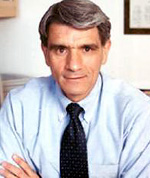 Stephen L. Hauser, MD, chair of the UCSF Department of Neurology, who has won national awards for 20 years of pioneering research on multiple sclerosis, will join other leaders at a summit on health care reform.

In addition to Hauser, leaders of business, labor, health care and government will convene in San Francisco for a high-profile discussion on what needs to be done. Participants will include Richard “Dick” Gephardt, former majority leader of the U.S. House of Representatives. Gephardt is on the board of directors of the sponsor, America’s Agenda Health Care for All.

Sponsored by the America’s Agenda Health Care Education Fund, the fourth in a series of Summit Conversations will be held on Wednesday, May 6, at 11 a.m. at the UCSF Mission Bay Conference Center.

The May 6 summit will be available via live streaming video at www.summitconversations.org.

“Congress is rushing to meet President Obama’s priority of health care reform,” said Doug Dority, president of America’s Agenda. “Chairs of appropriate committees in both the House and Senate have assured the president they are prepared to move forward with this critical legislation early this summer.”

Dority noted that the escalating costs of health care jeopardize long-term economic recovery of the United States by undermining the competitiveness of American businesses and their ability to create jobs. “Health reform is economic recovery.”

The San Francisco summit will be moderated by Bill Press, Emmy-winning political commentator. Participants will be: