Thanks to researchers like UCSF’s Allan Balmain, PhD, today’s accounts of research on genes and cancer are less likely to resemble a tale of blind men describing an elephant. Balmain is at the forefront among those helping other researchers to see more deeply into how genes play a role in cancer. That’s important because the tracking down and targeting of genes and proteins that play a key role in cancer are the foundation of new drug development to treat cancer. Balmain’s vision takes in not only mutant genes that change as cancers evolve, but also normal variants in the genes we all inherit. In fact, Balmain is discovering that in some cases, the same gene can be a good player or a bad player in cancer, depending on one’s overall genetic background. Balmain’s latest study, published on Jan. 11 in the online edition of the journal Nature, highlights the power of a new way to identify networks of genes that may exhibit telltale patterns in cancer. David Quigley, together with other colleagues in Balmain’s group at the UCSF Helen Diller Family Comprehensive Cancer Center, now has unearthed a previously unidentified role for the vitamin D receptor. It works as a coordinator of different skin functions that can influence cancer susceptibility. Quigley also has found that in mice born with a genetic profile that makes them more susceptible to skin cancer, networks of genes that control inflammation, skin barrier function and cell proliferation are controlled differently than in mice that are not susceptible to cancer. Just as different cell types make up a functioning organ with a defined structure and physiological role, many types of genes act together to form “genetic architectures,” as Balmain calls them. On the tinier scale of interacting molecules, these genetic architectures serve particular physiological functions — just as organs do. To help see what’s going on in both normal and cancerous cells, Quigley maps these genetic architectures to find out which parts of the genome contain the critical controlling genes. Both cancerous and normal cells use genes and the proteins made from their blueprints to send signals that guide life, death, growth and spread. These molecules form feedback loops that govern the activity of cells. Balmain’s new approach has helped identify genetic kingpins behind some of these regulatory networks. 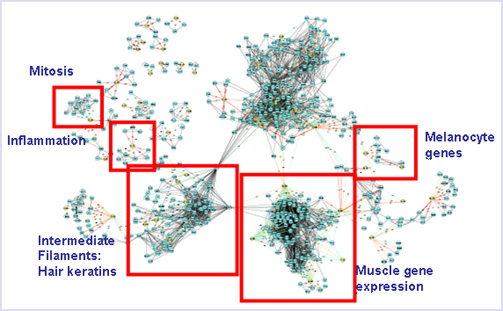 Figure: A “Genetic Architecture” of the genes expressed in skin.

Balmain has just begun to fathom the dimensions of genetic architecture that now are observable, thanks to new bioinformatic and computational tools developed by Quigley in his own lab. But it is not only the power of the tools that makes striking, new discoveries possible. It’s the fact that Balmain is looking at genes that act together or that change their activities together. Compared with the impact of a single, altered gene examined in isolation, these changes may be more clearly associated with cancer. Because of the strength of these associations, Balmain’s approach complements the highly celebrated and computationally intense genotyping studies that search the entire makeup of human DNA — the genome — to identify genes associated with elevated cancer risk. Building in network approaches to these genome-wide association studies may identify associations with cancer that are stronger than those found only by studying DNA. Balmain looks not only at DNA in tumors, but also at levels of RNA and protein. While it sounds computationally intimidating, Balmain says he can run the key programs on his laptop computer. “It’s been a lot of fun, actually,” Balmain says. “To me, it’s a whole new way to look at signaling pathways.”