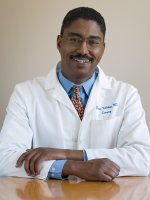 Naming a child can sometimes stamp a child.

So is it any wonder what an Ethiopian electrical engineer had in mind when he named his son Electron?

But while engineering may have been in the boy's blood, this youngest of five children — with siblings named Positron, Neutron, Deutron and Proton — grew up to have medicine in his heart.

Now, as a UCSF endocrine surgeon and a research scientist, Electron Kebebew, MD, operates on both bodies and genes. He has become, well, a force, a man on the move, someone who commands attention as he strides the hallways of UCSF Medical Center at Mount Zion.

"When you have a name like Electron, people notice you, and they have expectations of you," he says. "But by and large, as I think back on my life, my name has been a positive influence."

Positivism is what the 39-year-old Kebebew exudes. And why not? The former UCSF resident embodies the renewed bench-to-bedside spirit of today's medicine. 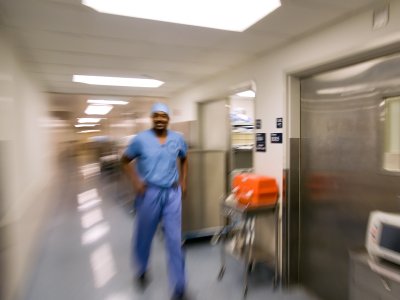 "Translational medicine is the term that best describes my life right now," says Kebebew, who has not one, but two clinical trials underway at UCSF's Comprehensive Cancer Center. One pivots around his research into the genetic signatures of endocrine tumors. The second examines how to make aggressive thyroid cancer more responsive to treatment.

"Chemotherapy doesn't work for most patients with aggressive thyroid cancer," Kebebew explains. "And radioiodine treatment doesn't work either because thyroid cancer cells don't capture iodine like normal thyroid cells do. What we're now testing is a diabetes drug, called rosiglitazone, which causes cancer cells to re-express the gene that takes up iodine. What is unique and exciting about the approach is that we're not using cytotoxic drugs to kill cancer. We're just retraining the cell to do something it has lost the ability to do.

"We're not billing this as a cure. For most people, it could just mean that their life is prolonged. But in those patients where the response to radioiodine is complete across all tumor cells, a cure is at least possible."

Call it an engineer's hunch, but early results show that an eight-week dose of the drug restores iodine uptake in some patients. While Kebebew maps out his next steps in that trial, he also is recruiting patients for a diagnostic study.

"In about 30 percent of cases, we can't tell if the thyroid is cancerous or not, so we end up operating on patients to get a diagnosis. I have been doing genetic array studies to find out if we can identify biomarkers for nonmalignant tumors that would make diagnostic surgeries unnecessary." Kebebew thinks he's on the right track: He filed a patent on the biomarkers last year and has now recruited one-quarter of the 600 patients he needs to prove the test's worth.

Worth is a good word to use, too. There are some 150,000 diagnostic thyroid surgeries performed in the United States each year. Throw in the cost of care, and each one tallies about $15,000. This is not counting the expense of the second operation should the first prove that cancer has taken root.

"The study is designed around predictive value; we still need to prove that the biomarker test generates false negatives less than 2.5 percent of the time. All in all, we're probably about three years away from being able to use it to make clinical decisions, assuming that everything works as we hope," Kebebew adds, flashing a confident smile.

Others straddling the midline between research and the operating room might find smiles hard to come by. Kebebew, instead, enjoys the hands-on problem solving.

Watch out, adrenal tumors, another disease that can hide its cancerous nature from various scans. Kebebew is developing biomarkers for you, too, thanks in part to a 20-year-old UCSF Mount Zion tissue bank that has more than 100 tumor samples stored.

It's an ambitious agenda for a chemical engineering undergraduate who never planned on attending medical school, let alone become a de facto spokesperson for a new kind of clinical research. "I think the NIH needs to better define — and fund — translational research, so that it includes not only the kind of basic science that might be many years away from a clinical application, but also the kind of basic research that has an immediate impact on patients."

Kebebew understands, of course, that he is an anomaly. But he makes no apologies for how he sees the problem. Beneath the blue scrubs, an engineer still plans and plots.

"I became a doctor because I wanted to be able to have a major impact on another person's life. My engineer's training has made me more analytical. I think in terms of cause and effect."

So far, the effects have all been promising. And if they stay that way, we might all have a reason to remember Electron Kebebew for more than his high-powered name.