Ever since the Institute of Medicine in 2000 called on educators to improve patient safety by producing graduates who were trained to provide patient-centered care and to work in interdisciplinary teams, universities across the country have been grappling with the barriers to health sciences education. Both faculty and students at UCSF have recognized the need for such interprofessional education. In response, educators from UCSF's schools of dentistry, medicine, nursing and pharmacy are working together to bring interprofessional experiences to their students' curricula.

"Traditional health professions' education has meant that students are taught in isolation from one another," said Dorrie Fontaine, associate dean of academic programs in the UCSF School of Nursing. "We're trying to break down some of those barriers," she explained. "And, when we do, our students will be better educated and their patients will be better cared for." At UCSF, those barriers range from the mundane to the philosophical, said Helen Loeser, associate dean of curricular affairs in the UCSF School of Medicine. "The biggest difficulties are really about logistics," Loeser said. She pointed to the limited amount of classroom space, the different academic schedules of each school and the fact that students enter these programs with varying levels of education and experience. "It will take a certain amount of creativity and some funding for faculty leadership and curricular innovation to overcome these obstacles," Loeser predicted. Loeser and her colleagues have been working with students to develop creative ways of enriching current curricula. In September, they hosted the first-ever Interprofessional Education Day and, in February, worked with the Work-Life Resource Center and Students for Interprofessional Learning on the first interprofessional seminar. Thanks to the strong turnout of 70 students, a second lunch-time seminar has been scheduled for September 17. Also in the works are two scenarios that are being developed by an interprofessional group of UCSF faculty. Together, these faculty members attended a program for health professions educators at Harvard University's Harvard Macy Institute. The group is currently writing scripts for two scenarios and designing one hour's worth of curriculum that will accompany each one. 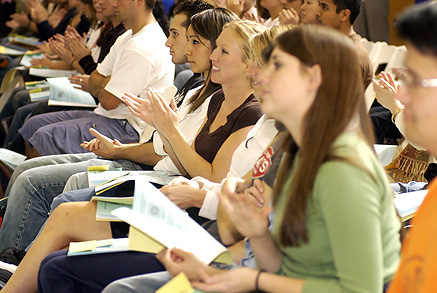 The scenarios will involve a patient played by an actor and an interdisciplinary team of health providers played by faculty and/or students. The scenarios will be filmed in the Clinical Skills Center and Simulation Lab and used to promote interactive group discussion. Now in the planning stages, the campus' core simulation facility will serve in the future as a place for such scenarios to be practiced in real time and by a team of health professions students, Loeser said.

The effort to expand these types of interprofessional education programs - and ultimately formalize this training on campus - will be driven by evidence that teamwork and communication improve patient care and safety, said Brian Alldredge, associate dean for academic affairs in the UCSF School of Pharmacy. "I think there's quite a bit of evidence to support this already and many groups at UCSF are studying this concept," Alldredge said. One such project is a Moore Foundation-funded study called Triad for Optimal Patient Safety (TOPS) being conducted at UCSF, Kaiser Permanente San Francisco, and El Camino Hospital. The study involves nurses, pharmacists, doctors, and other health care providers learning in teams about the elements of effective teamwork and communication. "We're hoping to show that this type of teamwork improves both the attitudes towards safety and patient safety itself," he said. From increasingly technical procedures to complicated health care financing, the delivery of health care is becoming increasingly complex. This means that students entering the workforce must be even more prepared to work with a variety of specialists as part of a team, said Dorothy Perry, associate dean for education in the UCSF School of Dentistry. "These newly trained professionals must come to view their role as a collaborative member of a team and value all the members of that team," Perry said. The new push for interprofessional education has also meant that Perry and her colleagues are themselves working in an interdisciplinary team. "It has been a new experience for us to collaborate with colleagues in the other schools," she said. "I think ultimately this effort will lead to more valuable connections between the schools at UCSF."