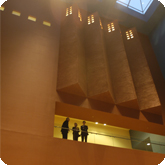 Top Malaysian bioscience graduate students and postdoctoral scientists will have a chance to study in the Bay Area as part of a new program aimed at boosting Asia’s ability to find treatments for some of the world’s most devastating diseases.

The $6.7 million program is funded by the non-profit Malaysia Biotechnology Corporation, which reports to the Malaysian government. Over the next five years, it will allow up to 30 Malaysian graduate students and postdocs to gain valuable technical skills in the laboratories of the California Institute for Quantitative Biomedical Research, or QB3, a cooperative effort that integrates the scientific expertise of UCSF, UC Berkeley and UC Santa Cruz with private industry to benefit human health.

Taking these skills back home, the participants can strengthen the technical ability of Malaysian biomedical research. The hope is that the increasingly sophisticated Malaysian workforce and the economies of the region will allow the country to take on development of drugs for tropical diseases that have been neglected by the Western pharmaceutical industry.

“Malaysia is a developing country that wishes to develop a biotechnology industry,” said Reg Kelly, PhD, director of QB3. “Their vision is to build that industry around diseases that are not being addressed by Western biotechnology and pharmaceutical firms. QB3 wants to help them.” Kelly serves as principal investigator on the new project.

Neglected diseases include malaria, African sleeping sickness, schistosomiasis, Chagas’ disease and tuberculosis. These diseases disable or kill hundreds of millions of people in the developing world every year. In addition, the program aims to prepare young scientists to help Malaysia develop new diagnostics or treatments for important emerging viruses like Dengue, or the new and lethal Nipah and EV71 viruses.

“The governments of developing countries such as Malaysia will invest more of their scarce resources into education if they see their research universities as engines of economic growth and job creation,” Kelly said. “Malaysia recognizes the contributions of the University of California to biotechnology growth in the Bay Area and wants its students to learn how we did it.  This explains their interest in our entrepreneurship programs.”

The commitment to offer training to senior scientists and administrators draws on the insights of another UCSF program: Global Health Sciences. GHS leaders are convinced that the best hope for sustained attacks on devastating diseases in the developing world lies in the abilities of those countries to build up their technical and administrative infrastructure and trained workforce in science and medicine.

“We believe we have created a novel model for educating students from developing countries,” Kelly said.  “Usually developing countries send their students to many different institutions in different countries.  A widely recognized problem is that they come home to a less supportive environment in which change is difficult.

“The new agreement brings a cohort of scientists to one institution, QB3, where the group will be trained as a team to return to Malaysia and nucleate the growth of one institution, the National Institute of Pharmaceuticals and Nutraceuticals. If we succeed this could be a new model for capacity building in developing countries.”

The National Institute of Pharmaceuticals and Nutraceuticals is a newly established institute that aims to stimulate and sustain the global competitiveness of the Malaysian biopharmaceutical and nutritional supplement industries.

“I really believe that increased training of graduate students and postdocs from developing countries will eventually bring the greatest rewards towards global health,” said P’ng Loke, a postdoctoral scientist in pathology at UCSF and director of the new program. Loke is a native of Malaysia.

“Apart from my own research, my greatest passion is the development and training of science and scientists in the developing world,” he said.

The new five-year agreement calls for the Malaysia Biotechnology Corporation to support the educational, laboratory and training costs of the participants. The participating graduate students and postdocs will be selected by QB3 faculty scientists and the director of the MIPN, Mohamed Isa Abd Majid.  The students do not receive academic degrees from UC, but from Malaysian universities.

The program benefits QB3 faculty scientists in several ways, Kelly said. In addition to strengthening their ties with Asian colleagues, faculty involved in the program will gain fully funded and highly motivated Malaysian graduate students and postdocs who will become valued colleagues as they become familiar with the advanced laboratory equipment and procedures.

Founded in 2000, QB3 is one of four California Institutes for Science and Innovation, each involving multi-campus collaborations and combining state and private resources to advance research critical to sustaining economic growth and competitiveness. Each Institute seeks major advances by combining the expertise of different disciplines, and bringing together the strengths of different campuses.
With headquarters at UCSF, QB3 brings together scientists and engineers at UCSF,  UC Berkeley and UC Santa Cruz.  It is the only Institute devoted to research to advance human health. Others focus on telecommunications, information technology and nanotechnology

QB3 supports an active research program on some of the world’s most pernicious parasitic diseases. Scientists at the Sandler Center for Basic Research in Parasitic Diseases at UCSF have identified enzymes that are essential to digestion in the parasites that cause Chagas’ disease, schistosomiasis and African sleeping sickness, and they have screened for existing compounds that can disable the enzymes. Pre-clinical research has shown that one drug candidate is effective against Chagas’ disease, and studies are under way to determine its ability to treat schistosomiasis and sleeping sickness as well.

QB3 scientists at UC Berkeley have combined genes from three separate organisms to create a single bacterial factory, capable of making an anti-malaria “miracle” drug simply and cheaply. The drug, artemisinin, is one of the most promising next-generation anti-malarials because of its effectiveness against strains of the malaria parasite now resistant to front-line drugs.