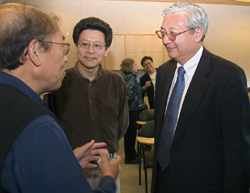 Funded by a $63,000 gift from the New York-based Li Foundation to the UCSF School of Pharmacy, Chinese scientists from Peking University will study the emerging field of systems biology at the University of California, San Francisco (UCSF).

The gift was announced October 6, 2006 in San Francisco by School of Pharmacy Dean Mary Anne Koda-Kimble, PharmD, who previously announced the gift in Beijing, China via video, at the June 25, 2006 Center for Theoretical Biology conference at Peking University.

The Li Foundation Fellowship Program will help support scientists from Peking University’s Center for Theoretical Biology to study at the University of California’s (UC’s) California Institute for Quantitative Biomedical Research (QB3), which is headquartered at UCSF.

An agreement between the two institutions to collaborate around systems biology was signed in November 2005 in Beijing.  United States Senator from California Dianne Feinstein and San Francisco, California Mayor Gavin Newsom led a delegation at the ceremony.  Chao Tang, PhD, professor, UCSF School of Pharmacy, department of biopharmaceutical sciences and QB3 faculty affiliate, who will direct the research collaboration, signed the agreement on behalf of UC’s QB3.  Tang also holds joint faculty positions in the UCSF School of Medicine and at Peking University.

“We hope to welcome the first Li Fellow in systems biology here to UCSF before the end of the year,” said Tang.  “It’s an exciting time in science.  Peking University is strong in the physical sciences, and UCSF is strong in the biological sciences.  By asking health questions from the joint perspectives of the biological sciences and the ‘hard’ sciences, such as physics, engineering, and computation, we may discover new scientific principles and profoundly impact medicine and therapeutics.”

An important component of this new collaboration is the training of new leaders in the systems biology field.  “We will cross train at Peking University and UC exceptional young scientists who we hope will become leaders in an era of science that flourishes without boundaries,” said Tang.  “The Li gift gives us essential seed funding to initiate this training.”

“The Li Foundation is pleased to play a role in this exciting alliance,” said Taie Li, PhD, President of the Li Foundation.  “The Foundation’s principal goal is to promote goodwill between the United States and China.  We feel the best way to achieve this goal is through the education of Chinese scholars.”

The Li Foundation has been supporting the science training of Chinese scholars at UCSF for more than 15 years.  The foundation was established by the late Mr. K. C. Li who was an international authority on tungsten, a successful businessman, industrialist, and philanthropist.

“The Foundation’s farsightedness in its support of Chinese scholars is shown again as it focuses funding in the new area of systems biology,” said UCSF’s Koda-Kimble. “We enthusiastically encourage this exchange.”