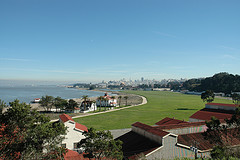 WHAT:  Olympic legends will join other swimmers in a 10-mile-long relay swim around San Francisco Bay in the first “Swim Across America San Francisco to Fight Cancer.”

WHO:  Olympians, Stanford Swim Team, UCSF staff and others

Over 100 swimmers are expected to participate in the event, including San Franciscan Mark Harrison, who was awarded the gold medal in the 400-medley relay at the 1996 Olympic Games in Atlanta and 1996 Olympian Ray Carey, who swam in the 200-meter butterfly. Other Olympians include Anne Cribbs, Janel Jorgenson, Jeff Float and Roque Santos.

The relay swim will be staged from the boat the “California Spirit” and will begin at 8:00 a.m., with each group of swimmers swimming for half-hour intervals 3-4 times throughout the 5 1/2-hour swim.

The swim is not a race.  All of the swimmers are “winners,” and each will receive a medal. Each swimmer pledges to raise a minimum of $2,000, and prizes will be awarded to the top fundraisers. Proceeds from pledges collected by the swimmers, as well as online donations, will benefit the UCSF Children’s Hospital Survivors of Cancer Program. To make a donation go to:
San Francisco - Swim.

About the UCSF Children’s Hospital Survivors of Cancer Program

The UCSF Children’s Hospital Survivors of Childhood Cancer Program, directed by pediatric oncologist Robert Goldsby, MD, will be the swim’s sole beneficiary. Goldsby will team up with Aimee Sznewajs, the clinical coordinator of the Survivor Program, to swim in the race.

Goldsby, an associate professor of pediatrics in the UCSF School of Medicine, said that continuing advances in pediatric cancer treatments have resulted in a growing population of survivors of childhood cancer, and physicians still are learning about the long-term consequences of childhood cancer and its therapy.

“The most common childhood cancer is acute lymphoblastic leukemia (ALL), which was almost uniformly fatal prior to the 1970s. However, now we expect about 80 to 85 percent of ALL patients to be cured of their cancer,” he said. He added that about 70 percent of all children diagnosed with cancer should expect to live long-term.

“We want to make sure that pediatric cancer survivors are getting the appropriate clinical follow up and that they are knowledgeable about their risks for recurrence of disease and late effects,” Goldsby said.

Swim Across America is a 20-year-old non-profit organization founded to raise money and awareness for cancer research, prevention and treatment, through sponsoring swimming events throughout the United States. To date, Swim Across America has raised over $13.5 million.

One of the nation’s top children’s hospitals, UCSF Children’s Hospital creates an environment where children and their families find compassionate care at the healing edge of scientific discovery, with more than 150 experts in 50 medical specialties serving patients throughout Northern California and beyond.