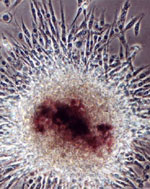 UCSF scientists have determined that the quality of bone matrix, a key component of bone, is regulated by a molecule known as transforming growth factor beta. The finding, they say, suggests a possible target for preventing and treating bone fractures associated with aging and genetic diseases.

The study will be reported later this week in the Online Early Edition of Proceedings of the National Academy of Sciences (PNAS).

The ability of bone to resist damage depends on the mass, or quantity, of bone, its architecture and the quality of bone matrix, the mineralized material between cells.

There has been significant disagreement about whether the quality of bone matrix varies among individuals and, if it does, whether it could be altered for therapeutic reasons. In any case, until now, scientists have lacked a strategy for measuring its quality and teasing out its impact, says senior study author Tamara Alliston, PhD, UCSF assistant adjunct professor of Cell and Tissue Biology.

In the current study, the team explored whether transforming growth factor beta (TGF-b) regulates the properties of bone matrix because there were hints that it might. TGF-b is known to play a role in the development of osteoblasts, cells that produce bone matrix.

The researchers carried out their evaluation in five sets of mice genetically engineered to produce differing levels of TGF-â signaling within osteoblasts, and, for comparison, in normal, or “wild type” mice. After the animals had been euthanized, the team utilized highly sensitive instruments developed in the materials sciences—atomic-force microscopy, x-ray tomography and micro-Raman spectroscopy—to measure the properties of bone matrix independent of bone mass and architecture. They also compared the bones’ resistance to fracture in a bending test.

The results were notable, according to Alliston. In animals genetically engineered to produce high levels of TGF-b, the measurements of bone matrix indicated increased susceptibility to fracture. The matrix was less elastic, less hard and contained lower levels of the mineral calcium phosphate. In addition, the animals’ bones were less resistant to fracture in the bending test.

In contrast, in animals with low levels of TGF-b,the bone matrix was more elastic, harder, had higher mineral concentration - and the bone overall had increased mass. In addition, the bones were more resistant to fracture in the bending test.

“This is the first evidence that properties of bone matrix can be regulated by a growth factor and that by modifying the TGF-b pathway, specifically, these properties can be controlled,” says Alliston.

The study suggests, she says, that TGF-b could be targeted for clinical intervention in patients. “By decreasing TGF-b signaling at the relevant site in the body, we may be able to improve the quality of bone to either prevent the damage that occurs in osteoarthritis and osteoporosis, or improve the quality and speed of bone repair following bone fracture, joint implantation, dental implants or bone grafting.”

This strategy could prove particularly useful for aging baby boomers, as joint-replacement therapy often fails over the course of years, says Alliston. Hip replacements, for example, often fail within 15 years, and a second replacement takes a significant toll on the body. A person receiving a hip replacement at age 55 or 60 generally will require a second one by age 70.

“If we could decrease the production of TGF-b at the site of the transplant, we might be able to strengthen the quality of bone being formed,” says the lead author of the study, Guive Balooch, BA, in the UCSF Graduate Program in Oral and Craniofacial Sciences and Division of Bioengineering.

Of note, clinical trials are being developed to test whether a drug that inhibits TGF-b will prevent cancers from metastasizing in patients, says co-senior author Rik Derynck, PhD, director of the UCSF Program in Craniofacial and Mesenchymal Biology, UCSF Department of Cell and Tissue Biology, and co-director of the UCSF Institute of Stem Cell and Tissue Biology. This separate line of investigation involving TGF-b builds on evidence that cancer cells “upregulate,” or increase, TGF-b when they decide to metastasize. Scientists hypothesize that the increased levels of TGF-b enhance the ability of cancer cells to invade other tissues.

Such a drug could also prove useful in modifying bone quality, It could even prove useful in treating the bone deterioration that often occurs when cancers metastasize to the bone, he says.

It is worth noting that the findings do not detract from the theory that bone mass, or quantity, is an important determinant of bones’ ability to withstand fracture, says Alliston. One set of genetically engineered mice in the study had higher quality of bone matrix and lower bone mass—and the bone fractured more easily.

The overall finding, she says, was that a reduction in TGF-b signaling enhanced the quality of bone matrix, as well as the bone mass, collectively enabling the bone to better resist fracture.

The team is now exploring the functional significance of the bone matrix properties. “We have identified several factors we think are important, and are in the process of defining their contribution to fracture-resistance,” she says.

Susceptibility to bone fractures and bone deterioration increases with age, often due to metabolic changes. Significant bone loss is diagnosed as osteoporosis. Deterioration in the bone and cartilage of joints is known as osteoarthritis.

Some diseases of bone degeneration are genetic, such as osteogenesis imperfecta, which is characterized by brittleness of bone, rather than loss of bone, and osteopetrosis, in which bones become overly dense, leading to a variety of significant disorders, including blindness, deafness, pathological fractures, and infections.

The new finding offers provocative hints that defects in TGF-b signaling could play a role in some genetic diseases. Building on ongoing work in the lab, the team is now exploring strategies that could lead them toward TGF-â‘s mechanism of action.

The study was funded by an Arthritis Foundation Hulda Irene Duggan Arthritis Investigator Award, the National Institutes of Health and the Department of Energy.