UCSF is committed to a safe and healthy Mount Sutro Open Space Reserve.

UCSF closely monitors the 61 acres in the Mount Sutro Open Space Reserve, a vibrant urban open space in the heart of San Francisco. With sweeping views of the city and nearly five miles of hiking trails, the Reserve is accessible year-round for residents and visitors to enjoy.

UCSF’s top priority is to ensure the safety of the Reserve for our visitors, campus buildings and neighboring homes. As is the case across California, the severe, ongoing drought has caused widespread decline in the overall health of the Reserve. UCSF’s two in-house registered arborists have documented an uptick in the number of hazardous trees threatening visitors’ safety and adjacent property and an increased risk of brush and wild land fires. Based on the decline, we are taking immediate steps to mitigate hazardous conditions.

Fire Safety in the Reserve 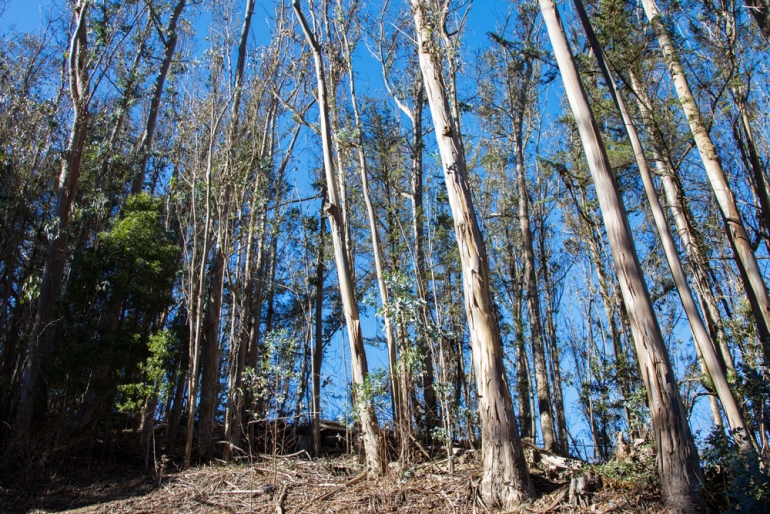 Some trees on Mount Sutro are dead or dying because of the recent drought. Photo by Susan Merrell

UCSF and the San Francisco Fire Department separately determined that there is an urgent need to repeat defensible space work that we performed in 2013, providing up to 100 feet of fire defensible space around UCSF buildings and neighboring homes along Christopher and Crestmont Drive. Fire defensible space is the fuel clearance around structures to reduce fire risk and improve firefighters’ effectiveness and safety.

Within the first 30 feet of structures, we intend to remove all flammable vegetation by thinning shrubs and trimming tree branches up to 10 feet off the ground. The remaining 70 feet would include the removal of all “ladder fuels” which are plants that act as a “ladder” to carry fire from the ground up to the tree canopy. We do not anticipate removing any viable trees as part of this work. Most of the defensible space work will be performed by goats, and we’ll use mechanical tools for the rest. The goats will be in the Reserve during the month of December, and the mechanical work will likely be done in December and January.  Learn more 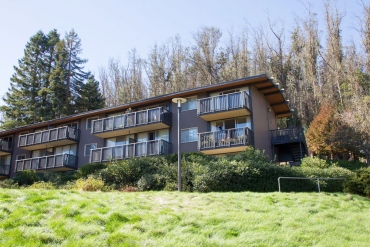 Many of the drought-stressed trees along Johnstone Drive pose a significant hazard to the residents of the Aldea San Miguel Housing Complex. Photo by Susan Merrell

Many of the drought-stressed trees along Johnstone Drive are dead or nearly dead and pose a significant hazard to the residents of the Aldea San Miguel Housing Complex where more than 500 residents – UCSF students and their families – call home. The tree removal work will be extensive and focused on approximately a half-acre of the total 61 acres of the Reserve.

The tree removal will likely begin in December and last approximately four to six weeks, with minimal impact to residents and neighbors. Neighbors can expect temporary parking restrictions and trail closures near the impacted portion. Noisy work will not begin until 8 a.m. and last until approximately 5 p.m.

In November 2015, Governor Jerry Brown declared a state of emergency due to the approximately 22 million trees that have died across the state because of the drought. “California is facing the worst epidemic of tree mortality in its modern history,” Governor Brown said in a letter to U.S. Agriculture Secretary Tom Vilsack. “A crisis of this magnitude demands action on all fronts.”

In September 2015, KQED reported on California’s declining forests saying, “With climatologists predicting that this year’s El Nino will usher in strong winds and torrential rains, weakened trees pose dangers to people and property across the state.” Many of the large trees along Johnstone Drive are dead or dying and are directly across the street from student housing and parking areas. Immediate hazardous tree removal is necessary to ensure the safety of our residents and visitors to the Reserve.

KQED reported: “After a U.S. Forest Service aerial survey last spring, researchers estimated there were 12.5 million dead trees on national forest lands alone. That doesn’t count dead and dying trees in open spaces and urban parks or on private property like your backyard or your neighbor’s. With climatologists predicting that this year’s El Nino will usher in strong winds and torrential rains, weakened trees pose dangers to people and property across the state.”

The south-facing Johnstone trees absorb the most sun and wind and are exhibiting higher drought impact, increasing the risk of falling limbs and total tree failures. During a winter storm, hazardous trees can endanger residents, visitors and their property at the Aldea Center.

Replanting in the Reserve

UCSF’s vision is to maintain a vibrant and healthy ecosystem in the Mount Sutro Open Space Reserve in the face of a changing climate and extreme weather conditions.  Because the hazardous tree removal work will be extensive, UCSF will immediately replant the area nearest the street with species such as ceanothus, juniper, Sydney golden wattle, madrone, coffeeberry, buckeye and toyon. Taller trees, such as Monterey cypress, redwood and coast live oak, will be planted away from the roadway. The purpose of replanting the area is to increase biodiversity, restore habitat for birds and animals and encourage the long-term health and sustainability of the Reserve.

Learn more about why and how UCSF is taking action to protect Mount Sutro.