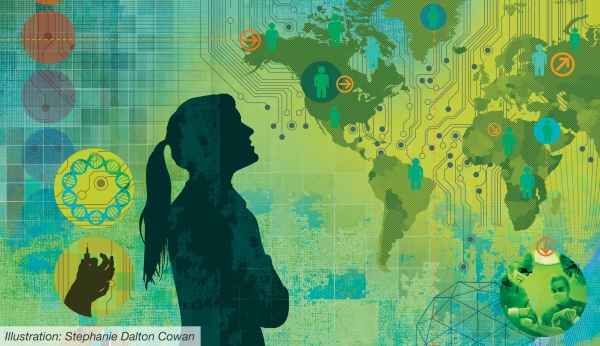 When Julia Choi’s grandmother suffered her third stroke, a doctor in the emergency room gave her blood thinner medication to prevent another stroke. Not long after, Choi’s grandmother experienced gastrointestinal bleeding – a common side effect of blood thinners. She later passed away. Choi never found out if the bleeding was indeed caused by the drug or by something else.

The memories of her grandmother’s struggle came flooding back to Choi last spring when she took a course in genetics and drug response as a first-year pharmacy student at UC San Francisco. Not only did she learn that some people carry variants in their genes that cause adverse reactions to clopidogrel, the drug her grandmother had been given, but Choi also had the opportunity to have her own genes tested for such mutations.

The UCSF School of Pharmacy is one of the first pharmacy schools in the nation to offer its students genetic testing for drug response. It’s just one way UCSF is educating students about precision medicine – an emerging approach that collects and integrates vast amounts of data and new technologies to develop individualized treatments. As the health care providers of the future, today’s students will be diagnosing and treating patients based on a barrage of information not just about the person in front of them, but also about millions of other patients around the world.

Genetic codes; environmental and nutritional data; reports from patients’ electronic health care monitors; and input from epidemiologists, informaticians and scientists studying the molecular underpinnings of disease – all these factors must be considered in the world of precision medicine. The upside is that “we will be able to find the right treatment for our patients, without going through all the trial and error we do today,” says Catherine Lucey, MD, a resident alumna and the vice dean for education at UCSF School of Medicine.

“What’s so great about being at UCSF is that we’re fortunate enough to have people who strive to practice tomorrow’s medicine today,” she continues. The University has been educating its students regarding precision medicine for years by teaching them about genetics, population-based clinical research, and the nature and importance of working in multidisciplinary teams.

Tapping the Power of Genes

As Choi learned firsthand in the School of Pharmacy’s Genetics and Pharmacogenetics course, a single gene can influence drug response – knowledge that is shaping more precise approaches to therapeutics.

She was one of 22 out of 122 students in her class to opt in for the genetic testing, which evaluated the CYP2C19 enzyme. People who have variants of this enzyme can over- or under-metabolize clopidogrel (also known by the brand name Plavix), which means they are 3.6 times more likely to suffer a heart attack, stroke, or even death. These outcomes can be easily avoided, however, by first testing a patient for the genetic mutations and then prescribing a higher or lower dose of the drug or another drug entirely.

“How much do you learn when you have a touchstone to the material?” asks Kathleen Giacomini, PhD, professor and co-chair of the Department of Bioengineering and Therapeutic Sciences. “If it’s in your genes, you’re going to learn it.” 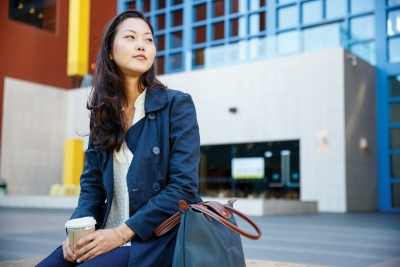 Pharmacy student Julia Choi received genetic testing in one of her courses, an
experience that she says was intensely personal – and important training for her
future as a pharmacist.

Choi certainly did. She was relieved to discover that the CYP2C19 variant is not present in her own genes. The experience was intensely personal for her but, she says, “even for the students who didn’t participate in the testing, it became personal. We’re such a small class and we know each other well, so everyone was invested in the results.”

By educating students about how a single gene can affect drug response, the testing illuminated how helpful such information can be for their future patients, says course co-director Esteban Burchard, MD, MPH, the Harry W. and Diana V. Hind Distinguished Professor in Pharmaceutical Sciences II. Choi echoes his sentiment, adding, “As we become the next generation of pharmacists – and doctors and nurses could implement this, too – it will be important for us to use genetic testing to provide more effective medications, as well as cost savings.”

Practicing this kind of precision medicine will not only save money, it will save lives, says Nadav Ahituv, PhD, an associate professor of bioengineering and therapeutic sciences. According to the Food and Drug Administration, adverse drug reactions are the fourth leading cause of death in the United States, outranking pulmonary diseases, diabetes, AIDS, pneumonia and accidents.

As medications are metabolized in the body, they interact with more than just one gene. Multiple genes end up influencing how an individual responds to a drug, says Ahituv. “Because patients are getting their genomes sequenced, we can now look beyond just one gene and its response to a specific drug to a multitude of genes and their responses to many drugs.”

In his course Principles of Pharmacogenomics, Ahituv teaches both PharmD and PhD students how a drug interacts with many genes during its metabolism, and how those interactions determine the correct dosage of the drug. He also demonstrates how to use genomic websites, such as PharmGKB, to get a fuller picture of this process.

“I think we should be much smarter about what drugs we prescribe based on a patient’s genetics,” says Ahituv. “And for PhD students doing pharmacogenomic research, they will walk away from this course knowing that when a new drug comes on the market, it’s important to discover which genes it interacts with and how.”

Such knowledge can be sharpened even further by analyzing genetics at a population-wide level. “You need large numbers of people, typically, to research and understand and prove that one drug will do better in one type of person than another,” says Jeffrey Martin, MD, MPH, a resident alumnus and a professor of epidemiology and biostatistics. In his course Epidemiological Methods, he teaches students how to design a study to generate that data, and then how to interpret it.

As more and more data become available to help diagnose and treat patients, UCSF leaders like Lucey say health care providers and basic scientists will need to interact more closely. Basic scientists can help clinicians interpret their molecular data, and clinicians can help basic scientists understand how their research is applied at the bedside. UCSF already offers a crash course for each set of students, designed to teach them about their colleagues on the other side of the bedside/lab bench divide.

For PhD students doing pharmacogenomic research, they will walk away from this course knowing that when a new drug comes on the market, it’s important to discover which genes it interacts with and how.

Medical students can dive deeply into basic science for a period as short as a summer or as long as a year through the Molecular Medicine Pathway – one of five pathways medical students use to guide their education at UCSF. By putting would-be doctors to work in a lab, the program helps them to better comprehend genetic mutations and drug design, says its co-director, Ben Cheyette, MD, PhD, an associate professor of psychiatry.

Of all that course’s lectures – about everything from leukemia to kidney disease – one of the most popular is on epilepsy. Daniel Lowenstein, MD, a resident alumnus who holds the Dr. Robert and Mrs. Elinor Aird Endowed Chair in Neurology, begins with the basics: he defines a seizure, lists possible forms of treatment and explains how many patients suffer from the condition.

Then he brings the facts to life by introducing a patient whose uncontrolled seizure activity was grooming her hair. Multiple drugs had failed her, so she opted for surgery. While she’s sitting in front of the students, Lowenstein shows a movie of her operation, with her skull open and her brain visible. In the movie, the surgeon interacts with her to determine which part of her brain to remove to eliminate the seizure focus, while still preserving critical brain function.

“The students are just awestruck,” remarks course director Andrew Leavitt, MD, a fellowship alumnus and a professor of laboratory medicine. “Listening to patients talk about their experiences empowers the students to think big. It’s really neat for them to see – ‘if I develop a drug, this is the person who is going to take it.’”

With their eyes set on precision medicine, UCSF leaders are considering how to evolve these existing courses to best educate future physicians, pharmacists, nurses, and dentists. What they consistently find is that data, massive amounts of data, will transform every discipline.

“We are asking, ‘What resources are available to access and interpret this data, and how do we use them?’ We all will need to be at least partial experts in informatics,” says Clay Johnston, MD, PhD, a resident alumnus, the associate vice chancellor of research and the director of UCSF’s Clinical and Translational Science Institute.

Two UCSF professors are leading the charge to increase the computational literacy not just of the University’s students, but also of its residents, fellows, and faculty. Launching the Institute for Computational Health Sciences are Neil Risch, PhD, director of the Institute for Human Genetics and the Lamond Family Foundation Distinguished Professor in Human Genetics, and Michael Fischbach, PhD, a resident alumnus and an assistant professor of bioengineering and therapeutic sciences. UCSF also plans to develop a systems pharmacology program with support from the Li Ka Shing Foundation, a key partner in helping advance precision medicine.

Check out the intro video, and click here for course details.

Another evangelist, Robert Nussbaum, MD, a professor of genetics, is striving to spread knowledge of the emerging field more widely within the UCSF community. He is the force behind an introduction to genomics course that will be offered in April 2014 through the online learning company Coursera, another UCSF partner.

He’s also spearheading two patient-focused genetic conferences that will help educate students, residents, and clinical faculty in a conversational format much like that of weekly rounds. One conference will infer targeted therapies for tumors based on genomic analysis. The other will attempt to diagnose otherwise nearly impossible to diagnose disorders or diseases – an effort that “will take a tremendous amount of bioinformatics and computer analysis,” says Nussbaum, who is also the Holly Smith Distinguished Professor in Science and Medicine.

Mastering such data will mean far more for patients if the providers of the future – and those who teach them – experience precision medicine personally, say UCSF leaders.

As Burchard and his team prepare to offer genetic testing to another class of first-year pharmacy students next spring, and add even more enzymes that affect drug response, he and his fellow faculty in the Department of Bioengineering and Therapeutic Sciences had the chance this summer to participate in a similar effort. They learned about how they respond to well-known drugs and how their genetic ancestry can influence drug response. In the School of Medicine, Lucey and Johnston are crafting an opportunity for whole genome sequencing – first for faculty and then for students.

“We’re working together to prepare for the day when it’s no longer going to be an individual doctor with her black bag, but a doctor with a big computer,” Lucey says. “But the best part is that our patients will get better care. If we can design systems that help us do our work more efficiently, so we can spend more time giving more personalized care to patients, I think everyone will be happier.