What looks like an old-school phone book is gripped by UCSF neuroscientist Pierre-Antoine Gourraud, PhD, MPH. But he soon sets the record straight: the thick packet he is holding is actually the medical file of a single patient with multiple sclerosis (MS), a complex, chronic, and incurable disease that can ravage the nervous system over decades.

“Keeping a big paper file is hardly a 21st-century approach to managing massive amounts of data,” says Gourraud as he tosses aside the file and picks up an iPad. One swipe of his finger reveals a single screen showing a highly detailed, well-organized overview of the same patient’s long medical history, along with how that history compares to the disease trajectories of thousands more MS patients.

This “MS Bioscreen” application – a team effort led by Gourraud and UC San Francisco Department of Neurology Chair Stephen Hauser, MD, an international MS expert – is a prime example of clinical discovery, one of UCSF’s precision medicine pillars. In clinical discovery, researchers and clinicians are taking vast amounts of patient data, often collected through first-ever clinical studies, and putting it into tools like MS Bioscreen that have a direct impact on patient care.

“The new revolution of ‘big data’ in medicine,” says Gourraud, “will use information technology to transform how we handle and decipher the complexities of diseases like MS.”

The Bioscreen enables clinicians to compare a particular patient to others with the same disease based on similarities in their clinical symptoms, brain imaging, and biomarker data. By viewing the outcomes of similar cases, each patient has a better idea of how he or she will eventually fare – and what can be done now to bring about the best possible outcomes later.

“MS is one of the great mysteries in medicine; it can be a benign disease with occasional problems, or an unrelenting condition that puts people into wheelchairs at a very young age,” says Hauser. “I want to be able to tell a 16-year-old with MS whether she can forgo risky treatment because her disease will be little more than a nuisance during her life, or we should treat it aggressively now in an effort to avoid extreme disability down the road.”

The majority of current Bioscreen data came from MS-EPIC, a trailblazing MS study begun at UCSF nine years ago. Short for “expression, proteomics, imaging, clinical,” the study involves intensive observation of 800 MS patients – the largest MS population ever tracked with such exactitude. 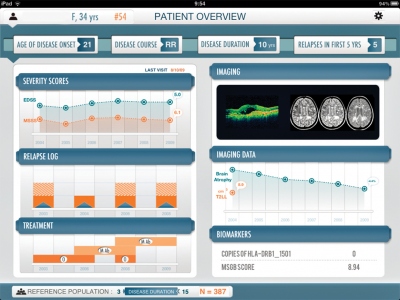 The MS Bioscreen captures a patient’s medical information in a single screen.

Hauser and his team maintain a 360-degree perspective on every EPIC patient. They scan the entire genome of each patient and family member to determine which genes may have played a part in the patient’s susceptibility to MS (a process that led to the identification of more than 110 new genes implicated in the disease). They meticulously monitor disease progression through sophisticated MRIs of the eye, brain, and spinal cord, and they look for biomarkers, like malfunctioning B cells, that can hasten its progress. Finally, they record the results of every therapy administered over the course of a patient’s disease.

“We have many different kinds of details that we can compare very easily,” notes Gourraud. “For instance, we can look at how a specific patient’s EDSS score – which stands for ‘expanded disability status scale’ and serves as a method for quantifying functional disabilities – stacks up against the EDSS scores of other patients with similar characteristics. We can then pinpoint the particular severity of the patient’s disease according to the percentile range in which he or she falls. It’s like a growth curve for kids.”All of this data has gone into MS Bioscreen, where it can be instantly called down from secure cloud storage and synthesized in a seemingly infinite number of ways. For example, a clinician can go to the “Reference Population Settings” section of the app and filter the entire data set according to demographic factors or dozens of other clinical, imaging, and biomarker characteristics. Tap the “Set” button, and the app’s comparative and predictive algorithms crank out graphs, charts, and even 3D MRIs that clearly put into context the details of the patient in question against those of the filtered dataset.

From there, guided by the tool and its algorithms, clinicians can make treatment recommendations based on what has (or hasn’t) worked for others with similar underlying characteristics. “We can consider who in that group had success with a highly active but potentially risky drug, such as one of the monoclonal antibody treatments for MS; who is likely to do well with a safer but less powerful treatment, such as one of the injectable drugs; and who might require no treatment at all. We can use the knowledge to determine which drug has a high probability of success for the patient in question,” Hauser says. “Our decisions are based on evidence rather than art, and personalized to an individual patient’s particular characteristics.”

Hauser is now working with several venture firms to make the Bioscreen available to the 2.5 million MS patients around the world. In addition, the Bioscreen application can be used to monitor people with other chronic, complex diseases. Giving patients direct access to the app is a primary goal of the Bioscreen project and, in a broader sense, a critical component of precision medicine’s clinical discovery area, which seeks revolutionary improvements in the way patients themselves interface with the health care system.

Left: Patients are able to view their information on the Bioscreen app and discuss
it with their doctor. Right: Renowned MS expert Stephen Hauser, the Robert A.
Fishman Distinguished Professor (left), and neuroscientist Pierre-Antoine Gourraud
(right) are leading the MS Bioscreen project.

“In our clinic right now, we have research stations with iPads where patients can access and discuss their information on the Bioscreen with the appropriate support of investigators,” says Gourraud. “This ability to see their personal stats compared to others has made our patients feel more engaged and empowered. They understand more vividly why we’re proposing one treatment versus another – and that understanding is why they’re more willing to stick with their treatment plan.”

“With a potentially life-altering disease like MS, there are very personal treatment decisions that must be made by patients,” Hauser observes. “They think to themselves, ‘How do I feel about the unlikely, yet not impossible, event of a life-threatening side effect of this medicine?’

“When making these decisions, we want to be able to give both patients and clinicians an evidence base. The more patients we add to the Bioscreen, the more this evidence base will grow – and the more accurate will be our predictions of the future for every patient.”