Gladstone scientists took skin cells from a patient with a heart disease and reprogrammed them into something known as iPS cells, which act very much like embryonic stem cells. In this magnified image, the iPS cells are growing into heart cells (blue) and nerve cells (green). Photo by Jin Lee/Gladstone Institutes 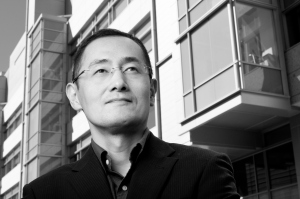 The UCSF professor and senior investigator at the UCSF-affiliated Gladstone Institutes received the award for discovering how to transform ordinary adult skin cells into cells that, like embryonic stem cells, are pluripotent – capable of becoming any cell in the human body.

The news – bringing UCSF's total of Nobel laureates to five – brought fresh attention to something UCSF long ago sensed and seized: the promise of regeneration medicine for repairing or replacing damaged cells, tissues, and even whole organs. 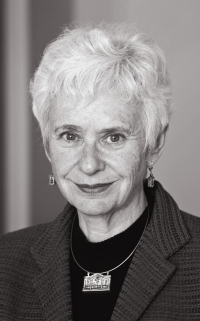 Despite the cells’ tremendous promise, political pressure to stop embryonic stem cell research began to brew. In a sign of the times, the US Congress passed a 1995 amendment, known as Dickey-Wicker, that prohibited the National Institutes of Health (NIH) from funding research in which human embryos are destroyed.

Undeterred, UCSF’s Roger Pedersen, PhD, managed to continue his work without federal funds, becoming one of two university scientists in the country (the other being James Thomson, DVM, PhD, from the University of Wisconsin) to derive human embryonic stem cells using donated human embryos.

Another wall went up in 2001, when President George W. Bush signed an executive order stating any institution engaged in research on a human embryonic stem cell line created after that date would lose all federal funding. To avoid putting even its sanctioned federal funds at risk, UCSF decided to move Pedersen and his team to an off-campus site – a former dental lab in a shopping center. The team completed the move without Pedersen, however, after he opted to leave for the University of Cambridge, where he could pursue his stem cell studies unimpeded.

Pedersen’s team persevered under Susan Fisher, PhD, successfully deriving the first reported lines nourished in culture on a bed of human cells (previous lines were nourished on beds of mouse cells). Their breakthrough literally vanished when a massive storm wiped out power to their shopping center lab: since they couldn’t move the cells to a powered-up campus lab without jeopardizing UCSF’s federal funding, “we had to watch while they slowly died,” Fisher says. It set them back two years.

Prop 71 to the Rescue

“Prop 71 was a perfect storm of three things,” says Bluestone, the A.W. and Mary Margaret Clausen Distinguished Professor in Metabolism and Endocrinology. “It was related to a transformational and exciting field; it was about not just one disease like diabetes or cancer, but every disease; and it was a means for the enlightened electorate in California to fight the anti-science movement in Washington.” 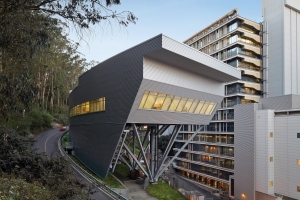 Out of Prop 71 came the California Institute for Regenerative Medicine (CIRM, or “serm” in the colloquial), created to regulate and fund stem cell research and facilities. Among CIRM’s first and largest grant recipients was UCSF, which had established a formal program with the help of a $5 million gift from Andy Grove, PhD, then CEO of Intel Corp. The program was eventually named the Eli and Edythe Broad Center for Regeneration Medicine and Stem Cell Research at UCSF, following a 2008 gift of $25 million from the Broads.

Renowned stem cell scientist and Broad Center director Arnold Kriegstein, MD, PhD, used the funding to recruit more top researchers, 25 of whom moved with their teams in 2011 to the new Ray and Dagmar Dolby Regeneration Medicine Building. Supported by $36 million from the Dolbys and $34.9 million from CIRM, UCSF planned the building to be both an engine for advancing stem cell science and a safe haven from federal funding constraints. President Barack Obama had already begun to ease those restrictions in 2009, when he determined the NIH could support research on many more human embryonic stem cell lines, including lines derived from donated frozen embryos no longer needed for fertility treatments.

With Yamanaka’s discovery of a way to work around human embryos, the controversy surrounding stem cell research started to fade. The Nobel laureate was first in the world to induce mouse skin cells to become pluripotent, successfully replicating his method with adult human skin cells soon after.

Yamanaka called his creation the induced pluripotent stem cell, or iPS cell, generated by treating a skin cell with four pieces of DNA (now called the Yamanaka factors) that induced the cell to revert back to its pluripotent state. His breakthrough has led to a variety of methods for reprogramming adult cells into stem cells that can become virtually any cell type, such as an oligodendrocyte, a critical neuron in the myelination process.

While iPS and human embryonic stem cells share core capabilities, iPS cells are better suited for three important aspects of disease research. The first is disease modeling, in which scientists use a patient’s own skin cells – made into iPS cells and then redifferentiated into the patient’s diseased tissues – to study his or her disease. This process results in a more accurate model than one created with cells from another organism.

“If a patient is suffering from an inherited disease of the nervous system, for example, you can turn the patient’s own skin cells into the dying nerve cells, which will contain a complete set of the genes that resulted in the disease,” explains Kriegstein, the John Bowes Distinguished Professor in Stem Cell and Tissue Biology. “You can then study the whole process of disease development in a dish, and even test out drugs on the cells.”

The second is drug development, using the cells themselves as drugs. “Ultimately, scientists could take a patient’s skin cells, induce them to their pluripotent state, correct the genetic mutation, and then transplant the corrected cells back into the patient,” Kriegstein says. “The great benefit to this path is that the corrected cells would not be rejected by the patient’s immune system.”

The third is testing new drugs for toxic effects to the heart or liver, which the FDA requires. Currently, testing is performed first in animals, but many drugs that do not appear to be toxic to animals can cause toxic reactions in humans. “The use of human cells to test drug toxicity might be a major method to improve the testing and reduce the enormous expense of withdrawing a drug once it’s already on the market,” says Kriegstein.

Hope on the Diabetes Horizon

“This iPS technology is for patients. The more scientists who build on it, the faster we can help those who live with chronic or life-threatening diseases.”

The team is partnering with biotech company ViaCyte, which began working with Hebrok and German a decade ago to determine how a human embryonic stem cell evolves into a beta cell, the kind of insulin-producing cell destroyed by the immune systems of Type 1 diabetes patients. Bluestone likens the evolution to driving from Los Angeles to New York, noting that ViaCyte successfully mapped the process all the way to Philadelphia – the pancreatic progenitor cell stage, between stem and beta cell – before it ran out of road.

“ViaCyte’s cells are very close to being beta cells but aren’t quite there,” says Bluestone. The final beta cell destination seems just within reach, however, since putting the pancreatic progenitor cells into mice leads to the development of insulin-secreting beta cells, the last leg of the cross-country trip.

“The next question is, ‘How do we introduce these pancreatic progenitor cells into people?’” Bluestone explains. To ensure that none of the immature cells escape and cause cancer in patients, ViaCyte has created an implantable, retrievable device that harnesses the ability of the cells to secrete insulin although the cells themselves remain caged.

Time will tell whether the capsule will also succeed in preventing the body from recognizing and destroying the transplanted tissue, Bluestone says. Meanwhile, the UCSF team is ready to work with ViaCyte on development and testing of immunosuppressive drugs to prevent tissue rejection.

“At this point, the company expects the device will be in patients in the next one to two years,” notes Bluestone. 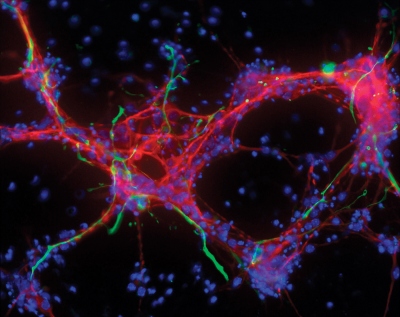 PMD patients are born without myelin, a material that insulates the nerve communication networks of the brain. In the absence of myelin, these networks “short-circuit” like bare electrical wires and are unable to correctly propagate nerve signals, resulting in neurodegeneration and dysfunction. PMD primarily affects boys and can be fatal by age 15; children with severe PMD have difficulty breathing and can’t feed themselves, crawl or walk, talk, or even sit up.

“PMD is so incapacitating that it becomes possible to think about testing a new therapy like stem cell transplant in these patients, although the therapy has a very unclear risk profile,” explains Rowitch.

Partnering with UCSF’s Nalin Gupta, MD, PhD ’96, the Dennis Bruce Dettmer Endowed Chair in Pediatric Neurosurgery, Rowitch injected human neural stem cells developed by biotech company StemCells, Inc., into the white matter of four PMD patients. Months after the transplants, they found evidence that the stem cells had successfully engrafted, receiving blood and nutrients from the surrounding tissue and integrating into the brain, a process Rowitch likens to a plant taking root.

While the transplanted cells appear to have generated myelin, Rowitch cautions the primary purpose of this phase I study was to show using the cells is safe. A phase II clinical trial is now needed to test whether transplanted cells can improve clinical outcomes in PMD patients. If a phase II trial proves successful, neural stem cell transplantation may one day lead to cures for a whole host of neurological diseases.

Bluestone acknowledges much of the credit for the advancement of stem cell science at UCSF and around the world is owed to CIRM and other private supporters of the work. He says after Prop 71 passed and CIRM began to thrive, programs bloomed across the globe. “Nobody wanted to be left behind. The amount of money, energy, and research put into the field was enormous, and it made a gigantic difference,” Bluestone says.

“Grants from CIRM and private supporters have literally transformed the worldwide landscape in stem cell research and catapulted California to the forefront of a whole global effort,” Kriegstein adds. “The largest concentration of first-rate stem cell science is in California. It wouldn’t be, without these grants.”

“Californians voted for Prop 71 because they wanted to see cures and treatments for diseases,” Kriegstein continues. “Considering that the field is so young and it takes 15 years for an experienced drug company to turn a proof of concept into a therapeutic, it’s remarkable we already have one or two going into clinical trials.

“Still, there’s a lot of work going on here in the very basic science phase, and that’s as it should be – since basic science is where it all begins.”