On June 9, California will become the fifth state in the nation to legally allow terminally ill individuals to end their own lives. Gov. Jerry Brown signed the End of Life Option Act into law in October 2015, after the state legislature passed the bill during a special session on health care. We spoke with several UCSF experts in end-of-life and palliative care about the law and about what it might mean for California providers and patients.

Read a digital flipbook of the entire summer issue of UCSF Magazine, featuring this and other stories. 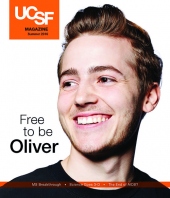 Brody has been advocating for aid in dying for 20 years, ever since a 40-year-old hospice patient with ovarian cancer asked him for help ending her life. “We had many conversations, and she made me read the book Final Exit, about self-deliverance,” he says. “We were able to find a way, legally, to meet her goals.”

Under the new law, Brody says, these scenarios will take place primarily in home settings by patients under the care of hospice and primary care physicians, as well as oncologists, cardiologists, neurologists, and other specialists who treat patients with terminal illnesses. But the law will do much more than help those patients, he says; it will also lead to advances in end-of-life care in every health care setting.

“We can predict what will happen in California by looking at other states that have enacted these laws,” Brody says. “The number of hospitals that had palliative care units went way up. The percentage of people who enrolled in hospice went way up. We will have more open discussion about death, and end-of-life care will improve.”

“The ethics issues raised by the law are profound,” Koenig says. “Who should control the moment of death? Should individuals ask their clinicians for help? These questions take you to the heart of the doctor-patient relationship and the caregiver’s role as healer.” Considering the law’s impending implementation a “bioethics emergency,” she quickly mobilized a UCSF-hosted conference of thought leaders last December, to help practitioners navigate the law’s ethical and practical challenges.

As an anthropologist studying end-of-life care, Koenig has been thinking about aid in dying since Californians first voted on its legalization in the 1990s. Initially opposed to legalizing it because of social justice concerns, she is now rethinking her position, given the advent of health care reform. “In Oregon,” she adds, “the fight over the law led to improvements in care for everyone, so it has had some unintended positive outcomes.”

What’s in a name?

The term palliative care is often confused with hospice, but they are not the same. Both provide care for patients with serious and life-threatening illnesses, but hospice focuses on end-of-life care, while palliative care focuses on improving patients’ quality of life throughout the course of a serious illness.

Hospice care and aid in dying are reserved for individuals with a terminal diagnosis, defined by Medicare as a life expectancy of six months or less.

Palliative care, in contrast, combines expert symptom management and psychosocial support with ongoing curative treatment. A relatively new medical field, palliative care was designated a board-certified specialty in 2007 and has been offered at UCSF since 1999, but its availability in U.S. hospitals varies widely.

We have a thousand ways to manage symptoms like pain, nausea, and shortness of breath and to provide psychosocial and spiritual support. That’s not a reason to end your life.

“The end-of-life option is driven by concern that people have of being trapped in an intolerable situation,” Pantilat says. The law, he notes, will help a few individuals who meet its strict criteria: terminally ill patients who have the mental competence to request lethal drugs and to take those drugs themselves, without assistance from another person. But palliative care can alleviate most suffering, he adds, and that’s where medical care should be focused.

“What the law doesn't address is that most people with serious and even terminal illnesses want to live as long and as well as they can, which is what palliative care offers,” Pantilat says. “We have a thousand ways to manage symptoms like pain, nausea, and shortness of breath and to provide psychosocial and spiritual support. That’s not a reason to end your life.”

A study in contrasts inspired Petrillo’s passion for end-of-life care. She observed that timely conversations with patients about their preferences could make the difference between someone spending his or her final days in the ICU or having a more peaceful death at home. “Medical care often proceeds in a prescribed way that’s not necessarily what our patients want,” Petrillo says. “It’s important to have conversations to figure out what people really care about.”

The public interest in aid in dying represents dissatisfaction with the status quo around end-of-life care, and we should take that as a call to action.

When patients are asking for something as drastic as ending their lives, she says, it’s clear that end-of-life care needs improvement. “The public interest in aid in dying represents dissatisfaction with the status quo around end-of-life care,” Petrillo says, “and we should take that as a call to action.” She has testified against aid in dying, concerned about the risk for abuse in disabled and vulnerable populations. But since the law passed, she has shifted her focus to provider education and palliative care advocacy to reduce the risk of harm.

“Since the law passed, I've had lots of conversations with patients about it,” Rabow says. “Often this is an expression of need to talk about death. But the good thing is that now, basic clinical skills absolutely must include being able to talk to patients about the end of life.”

A recent study by Rabow on cancer outcomes confirmed previous findings that when palliative care is initiated early, patients require less intensive medical care, resulting in lower cost and better quality of life. “The data are clear,” he says, referring to a 2010 Massachusetts General Hospital study, which found that palliative care patients also lived 2.7 months longer and were less depressed.

Only a very few patients will pursue aid in dying, Rabow adds. In Oregon, for example, 2012 deaths under the law accounted for just 0.2 percent of all deaths, and about one third of those who fill prescriptions never use the lethal drugs. ”I feel conflicted because the law will be costly to implement. It distracts us from the more than 99 percent of people who don’t need help ending their lives, but they do need better medical care, pain management, and support.”

“Making end-of-life options available throughout the state means that we have to fill gaps in access to palliative care,” Ritchie says. “The AAHPM is developing resources to help providers understand requests and conduct comfortable conversations with their patients,” she adds. The California Medical Association, which dropped its opposition to aid in dying last year, and the American Academy of Family Physicians are also offering help for doctors on the front lines.

California will be the biggest test yet of whether this law actually results in better access to palliative care.

“There is concern that the law poses greater risk in California because of our larger and more diverse population,” Ritchie says.

“The fear is that older, sicker, and more vulnerable patients might feel compelled to seek aid in dying when they could have been better served by good end-of-life care they could not access,” she adds. “California will be the biggest test yet of whether this law actually results in better access to palliative care.”