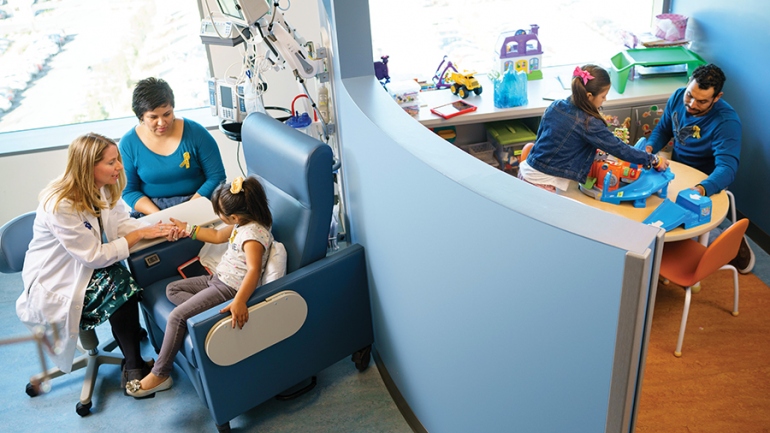 She drifts past young patients – many of them infants and toddlers – and notes their beaming smiles and balding heads. Her gaze shifts to the parents, their expressions tense but hopeful.

The scene reminds her of her childhood, of time she spent in the hospital visiting her sister, Jenny, who at age 2 was diagnosed with acute promyelocytic leukemia. Boyle fights back tears as she recalls Jenny’s suffering both during and long after years of chemotherapy and radiation treatments. Although her sister survived the cancer, she continues to this day to endure side effects caused by the very drugs used to treat her disease.

Read a digital flipbook of the entire fall issue of UCSF Magazine. 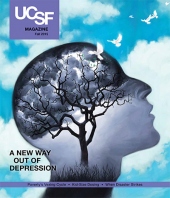 “Jenny developed metabolic syndrome, thyroid cancer and cognitive issues. Even simple things, such as learning to balance her checkbook, were difficult,” says Boyle, who holds a PharmD and a PhD and is an assistant professor of clinical pharmacy and a translational scientist at UC San Francisco. “So, for me, the goal isn’t just that patients survive, but also making sure they get the right dose as a child, so they don’t pay a lifelong consequence.”

Boyle considers this point as she examines the chart of a patient she met with recently. She first saw him several years ago, when he was 6 months old, underweight at just 14 pounds, and contending with kidney damage. He was scheduled to receive fludarabine, a drug used to enhance stem cell uptake, in preparation for a bone marrow transplant. He, too, had leukemia.

Just like Boyle’s sister, this baby had faced the risk of potential long-term side effects due to his treatment. However, his age, low weight and impaired kidney function suggested a more immediate threat: If dosed according to the standard guidelines, which are based on adult data, he could be cured of his cancer only to die a few months later as a result of irreversible brain toxicity.

Based on a computer model that Boyle developed, the baby received half the recommended dose, to account for his age, weight and kidney status. The result? A successful transplant with no toxic aftermath. “This child was given an individualized dose, and three years later he came into the clinic a thriving toddler, with normal physical and social development and a full head of brown hair. Seeing and talking with him was by far the best part of my day,” Boyle says.

Her computer models, which calculate the dosage for individual patients, harness the power of pediatric cancer drugs while limiting their toxic effects. She’s one of several researchers at the UCSF School of Pharmacy who’s advancing precision medicine – a field UC San Francisco is helping to shape – by transforming the way drug dosing is determined.

“At the end of the day, there is a dose that is subtherapeutic, one that is therapeutic but not toxic, one that is therapeutic and toxic, and one that is flat-out toxic. So dosing is an integral component in being precise with one’s medicine,” says School of Pharmacy Dean Joseph Guglielmo, PharmD and a resident alumnus. “It’s estimated that somewhere between 30 and 40 percent of the drugs people take do nothing for them. Yet people rarely consider whether their dose could be wrong.”

It’s estimated that somewhere between 30 and 40 percent of the drugs people take do nothing for them. Yet people rarely consider whether their dose could be wrong.
Joseph Guglielmo, PharmD
Dean, UCSF School of Pharmacy

If you receive the wrong dose or the wrong medication, your results could range from not getting better to feeling worse to even dying. According to the Food and Drug Administration (FDA), more than 700,000 people each year experience serious drug reactions, and more than 117,000 die from them.

By contrast, a more precise, individualized dose could boost a drug’s effectiveness against your disease while reducing or eliminating any potential side effects.

Each time you pop a pill or apply a medicine patch, you’re trusting a less-than-perfect dosing formula that’s based mainly on your age or weight. Meanwhile, other factors – such as your genetics, gender, lifestyle, diet and even the supplements you take – can affect which drug you need, along with how much and how often you may need it.

That’s because those and other factors influence how much of a drug enters your bloodstream and how quickly it exits your body. This entry-exit balance, known as absorption and clearance, is what determines the amount of a drug in your blood at any given time. If the level goes too high, you risk side effects. Too low, and the drug fails to do its job.

At the heart of this balance are so-called membrane transporters – proteins and enzymes on the surface of cells in your intestines, liver and kidneys – which grant or deny entrance to a drug. Genetic variations in these transporters can cause you to absorb more or less of a drug or to eliminate it so quickly that it never reaches a therapeutic level in your bloodstream.

For example, a common genetic variant in the liver transporter OATP1B1 slows its ability to clear the cholesterol-lowering statin drugs pravastatin (Pravachol), rosuvastatin (Crestor), and simvastatin (Zocor). This raises the amount of the statin circulating in the blood and can lead to muscle pain and even death. So if you need a statin drug, getting screened for this variant could help you avoid these risks by opting for a safer, more effective medication.

What you eat or drink can also interfere with these cellular gatekeepers. Simply downing a glass of grapefruit juice, for example, can wreak havoc with intestinal transporters and cause you to absorb too much of some statin drugs, increasing your risk of liver and kidney damage. That same glass of juice can cause the transporters to absorb less of other medications, such as the allergy medicine fexofenadine (Allegra), potentially reducing the drugs’ effectiveness. 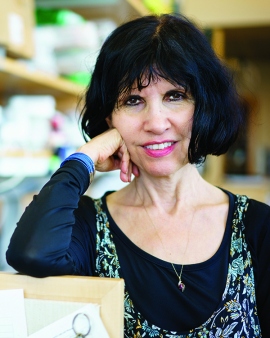 “Even dietary supplements can affect these transporters, as can lifestyle choices such as smoking,” says Kathy Giacomini, PhD, a professor of bioengineering and therapeutic sciences and co-director of the UCSF-Stanford Center of Excellence in Regulatory Science and Innovation. “Cigarette smoking is known to induce a drug-metabolizing enzyme. So for some drugs, smokers need a higher dose because they’re inactivating it so quickly.” Different drugs when taken together can also battle it out at the cellular level. An elderly patient who has taken repaglinide (Prandin) for her type 2 diabetes for years without problems, for example, may suddenly develop headaches, nausea and joint pain after another doctor prescribes cyclosporine, an immunosuppressant, to treat her rheumatoid arthritis.

Strangely, the side effects stem from the diabetes drug, not the new arthritis drug. “This happens because repaglinide enters the liver through a transporter that cyclosporine inhibits. So the diabetes medication has trouble clearing, which raises the drug’s level in her blood and causes side effects,” Giacomini explains.

Gender can also play a role in the dose you may need. Last year, for instance, the FDA cut the recommended dose of a popular sleep drug, zolpidem (Ambien), in half for women after studies showed that they clear zolpidem more slowly than men. This left women with more of the drug in their bodies the next morning, which could impair driving.

If your liver or kidneys are failing due to age- or disease-related changes, this, too, can affect which drug and dose you need.

With so many variables, choosing the best medication and dose can be a matter of trial and error – unless your doctor and pharmacist have tools to help factor all the variables into your prescription. Fortunately, such tools are being developed today.

Researchers in the UCSF School of Pharmacy are working on the development of more precise dosing methods by building computer models based on real-world patient evidence. Although labor- and time-intensive, their work could one day result in personalized prescriptions calculated by software programs that account for each patient’s individual characteristics. 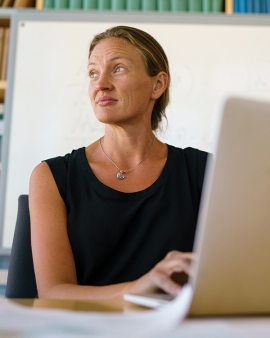 “It could be really personalized – how much you take, how frequently, and for how long,” says Rada Savic, PhD, an assistant professor at the School of Pharmacy. A specialist in pharmacometrics, she’s developed dosing models for drugs used to treat diabetes, tuberculosis, malaria, HIV and cancer. “For some people, this could mean that taking half a typical dose four times a day works much better than the full dose twice a day.”

But building effective models requires data from across many patient populations to discover which factors matter for each medical condition and drug used to treat it. It can take years to gather enough data to identify how they impact dosing, drug levels, and patient outcomes. The models’ complex calculations must also be refined and then validated through clinical trials.

Savic’s team, in collaboration with Boyle, created a dosing model for busulfan, a drug used to enhance stem cell uptake during bone marrow transplants. It’s currently being validated in infants as young as 6 weeks old. “Our model has worked unbelievably well in these little babies, where they are not dying of toxicity. When a new patient comes through, my heart races because I’m hoping the model does what we predicted. Every time it works, I do a little dance,” Boyle says.

While most UCSF dosing models are still being validated, some – such as Savic’s model for rifapentine, a drug used to treat latent TB – have been added to the FDA’s Guidance for Industry advisories. InsightRX, a spin-off from Savic’s UCSF lab, is now helping put models into an easy, user-friendly format that busy pharmacists and clinicians will be more likely to use. The San Francisco start-up creates software solutions that allow users to enter a patient’s variables and receive drug and dose recommendations, while keeping the complex calculations in the background.

Currently being developed for a handful of drugs, the software will eventually be applied to a broad range of medications, says Boyle, who serves as a consultant to the company.

Although the initiative is still in its early stages, she predicts that more precise dosing will improve not only care for current patients, but also their lifelong outcomes. “We’re maximizing how well a drug can work in their bodies while limiting the terrible effects it might have on all their systems. So for children with cancer, it means they may not suffer negative effects in adulthood,” Boyle says. “They might be able to forget that they ever had leukemia.”

Precise dosing will likely change the way you interact with your pharmacist. Rather than dashing out of the drugstore with a prescription and a list of potential side effects, you may chat about how to tailor your medication dosing to meet your specific needs.

“You might be told something like, ‘You're about to go on this new medication, so we're going to start you on 200 milligrams rather than 400 milligrams because, based on your genetics, we predict you may absorb more,’” says Kathy Giocomini, PhD, co-director of the UCSF-Stanford Center of Excellence in Regulatory Science and Innovation. “And then,” she continues, “they'll monitor you. There will be more discussion and maybe even a follow-up visit.”

With your genetic information on file, your pharmacist might also be prompted to switch your medication because of potential, genetically linked side effects. Or the pharmacist may ask you about habits such as smoking and adjust your dosage based on your answer.

In short, your visit and your medicine will become more personal.