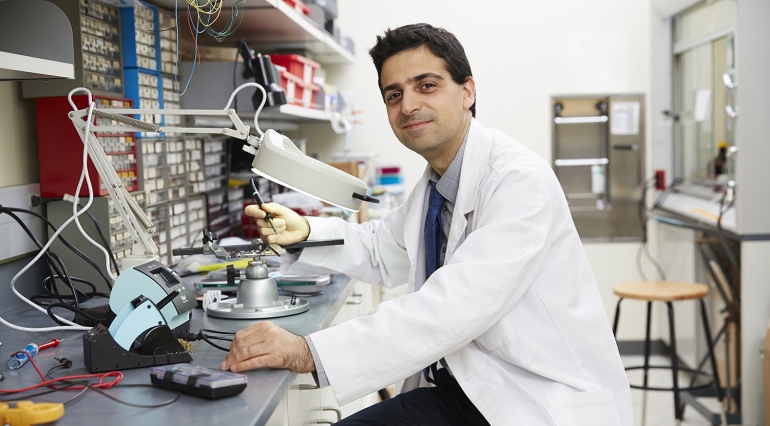 Mozzi worked with Larry Rand, MD, to develop the Smart Diaphragm, a device to detect early signs of preterm birth, for which Mozzi was named Forbes Magazine’s “30 Under 30.” The device is similar in size and shape to a diaphragm used for birth control, and can potentially identify early labor signs days or even weeks before contractions. Leveraging inexpensive technologies commonly used in cellular phones, the Smart Diaphragm will be accessible to remote areas, with a study beginning in South Africa in late 2015.

Mozzi leads a collaborative, multidisciplinary division of UCSF’s Biodesign Laboratory, which is headed by Shuvo Roy, PhD. Under Mozzi’s guidance, the Biodesign Laboratory helped design and test ten medical devices, all of which were directly informed by interactions between engineers, physicians, and patients. All the devices leverage recent advances in sensor technology that, while commercially available, are used primarily in the telecommunications and consumer electronics industries. By leveraging UCSF’s open, collaborative environment, Mozzi has translated both physician’s clinical needs and patients’ desires into engineering designs and specifications that can be rapidly applied to create new devices, sometimes within days. Several devices are currently undergoing clinical trials, and two are in the early stages of commercialization.