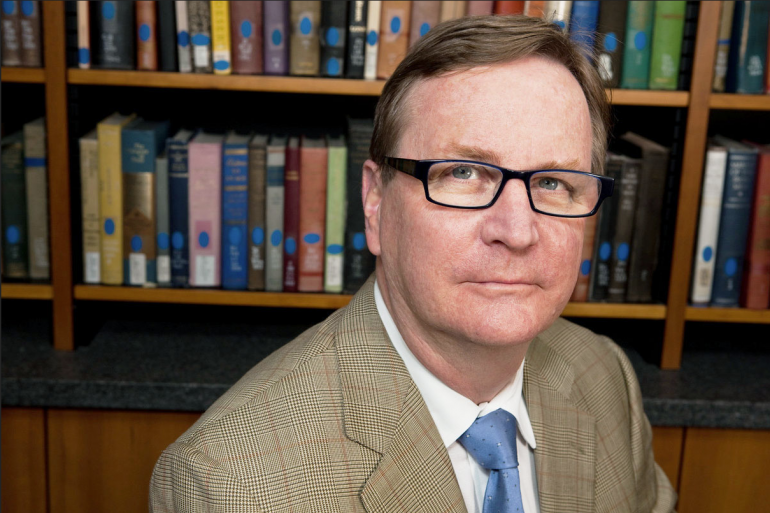 When Sam Hawgood, MBBS, first came to UC San Francisco in 1982, it was for the last in a series of interviews around the world for a job as a research fellow.

The 29-year-old Australian native was looking for an institution where he could combine his world-class clinical training in neonatology with laboratory research into a fatal disorder for newborn infants.

It was a competitive lineup, including universities in London, Oxford, Paris and New York. But renowned UCSF neonatologist William Tooley, MD, had spent a sabbatical in Melbourne while Hawgood was in his residency, and insisted Hawgood visit San Francisco too. 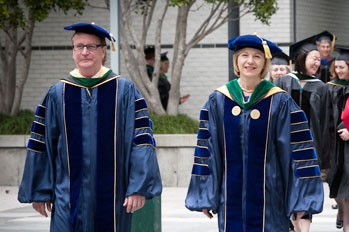 ► Read about the UC Board of Regents' approval of Hawgood's appointment

Then he met John Clements, MD, a preeminent physician-scientist who shared an interest in pulmonary surfactants, the key lipoproteins that are absent in premature infants’ lungs, preventing them from inflating. That interview was very different from the others, Hawgood said – a conversation, not an interview – and he realized this would be a very different experience.

“We elected to come here more for the individuals I knew than for what I knew about UCSF,” he said, of the decision by him and his wife, Jane, who has served as a clinical social worker in adult palliative care at UCSF for the past two decades. “I came to work with a particular group of individuals who had something special going on, but over time, I realized they really represented UCSF: open, very collaborative, very collegial, but very ambitious to make a difference.”

That visit launched a 32-year career at UCSF that has led to Hawgood’s appointment starting April 1, 2014, as interim chancellor of the health sciences university, which the UC Board of Regents approved on Jan, 23.

Known for his intense loyalty, deep scientific knowledge and the gentle, inclusive nature of a pediatrician, Hawgood has served UCSF in almost every capacity through the years, from fellow to professor to department chair. He became dean of the UCSF School of Medicine and vice chancellor for medical affairs in September 2009, after serving as interim dean since December 2007.

I came to work with a particular group of individuals who had something special going on, but over time, I realized they really represented UCSF: open, very collaborative, very collegial, but very ambitious to make a difference.

Sam Hawgood, on why he chose UCSF

As dean, he has been a core member of the Chancellor’s Executive Council, playing a central role in the University’s leadership and guidance during a time of profound growth.

“Sam is a highly respected physician, scientist and leader, and has been integral to the leadership of the University over the past four years,” said UCSF Chancellor Susan Desmond-Hellmann, MD, MPH, who will become chief executive officer of the Bill & Melinda Gates Foundation on May 1. “There is not a single campus initiative in which he has not been involved over that time, and I have full confidence in his ability to lead UCSF through this next transition.”

Shared Vision for the Future 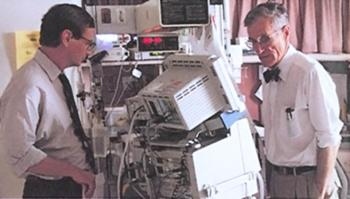 Hawgood with Rod Phibbs, MD, former chief of Neonatology at UCSF, in 2000.

Hawgood is no stranger to transitions.

Serving first as interim chair of the Department of Pediatrics, for which he was named chair, then interim dean of the School of Medicine, which led to his current role, Hawgood is known for his steady hand and calm demeanor through change.

This one will be no different, both due to his own efforts and to the shared purpose of the management team that leads UCSF.

“We share a common vision about the excellence of UCSF, its history and legacy,” Hawgood said. “UCSF’s vision for the future is a shared vision, and we will not allow our momentum to lag in any way.”

Sam Hawgood, MBBS, has had a distinguished career at UCSF, which he joined as a research fellow in 1982. He went on to become a professor and, later, served as chair of the Department of Pediatrics and associate director of the Cardiovascular Research Institute, while also earning an international reputation in neonatology research.

A native of Australia, Hawgood completed medical school with First Class Honors at the University of Queensland in Brisbane, and trained there in pediatrics as a resident.

As a clinician, he witnessed the deaths of infants from respiratory distress syndrome (RDS), a major cause of newborn mortality, due to the lack of a key lipoprotein called surfactant that lines healthy lungs and enables them to expand with each breath.

Hawgood’s quest to prevent RDS led him to UCSF, where he worked as a research fellow with the distinguished scientists John A. Clements, MD, and William H. Tooley, MD, both pioneers in the discovery and therapeutic uses of pulmonary surfactant.

Hawgood started his own laboratory in 1984, which is focused on the proteins associated with pulmonary surfactant. His scientific contributions over the last decades have been recognized by numerous awards, publications and invitations to present in national and international forums. He is a member of the American Academy of Pediatrics, and was elected in 2010 to the Institute of Medicine (IOM), part of the National Academy of Sciences.

Hawgood has maintained an active presence in clinical medicine since serving first as division chief of Neonatology, then as chair of Pediatrics and physician-in-chief of the UCSF Benioff Children’s Hospital, prior to becoming dean. He is the president of the UCSF Medical Group, the faculty plan that represents more than 1,800 UCSF physicians.

Asked what he likes most about UCSF, Hawgood cited the breadth of UCSF’s endeavors across research, teaching and patient care and, “the challenge of taking that tremendously rich talent and excellence in our domains and forging a united purpose for the University.”

Among the initiatives Hawgood will carry forward are the university’s philanthropic efforts in support of UCSF Medical Center, UCSF Benioff Children’s Hospital, UCSF’s innovative research enterprise and its graduate students, which Desmond-Hellmann has championed over the past few years.

“Sam Hawgood is an excellent choice to serve as the interim chancellor of UCSF,” said William Oberndorf, who chairs the board of directors of the UCSF Foundation. “Sam has been at Sue’s side throughout the past few years, meeting with UCSF’s most generous supporters and working closely with the UCSF Foundation in its efforts. He is highly respected among the board and our supporters for his integrity and deep understanding of the university.”

He has been integrally involved in the vision for the university’s current framework of five, united missions: discovery, patient care, education, people and finances. He also has been key to a range of organizational initiatives, operational efficiency efforts, plans for a new research facility at San Francisco General Hospital and Trauma Center (SFGH), the new clinical strategy and strategic health system plan, and UCSF 2.0, which will inform the university’s strategy over the next two decades.

“Sam understands UCSF probably better than anyone, as a trainee, researcher, faculty member, department chair and dean of the medical school,” said Mark Laret, chief executive officer of the UCSF Medical Center and UCSF Benioff Children’s Hospital, with whom Hawgood has collaborated closely in defining UCSF’s clinical strategy. “He understands the clinical enterprise and the business imperatives that we have. There is no better choice and I am thrilled to partner with him.”

As dean of the School of Medicine, Hawgood oversees an organization with an operating budget of more than $1.7 billion, nearly 8,000 employees and 3,655 medical and graduate students, residents, fellows and postdoctoral scholars. He leads the school’s mission to advance human health through education, research, patient care and public service, reflecting the overarching mission of UCSF.

“There’s a lot to be proud about in the School of Medicine over the past five years,” he said, noting the quality of the faculty and students, the increasing synergy across campus, and an innovative new curriculum that represents the standard for medical education of the future.

Under his leadership, the school has become the top medical school in the nation in research funding from the National Institutes of Health ($439.6 million in 2013), reflecting the caliber of science performed on campus. Under his leadership, the school also became the only medical school in the nation to rank in the top five in both research and primary care education (No. 4 in each), in the US News & World Report’s annual assessment of graduate schools.

As interim chancellor, Hawgood will oversee the $4 billion UCSF enterprise, including its top-ranked graduate schools of dentistry, nursing and pharmacy; graduate research division and top-tier hospitals. 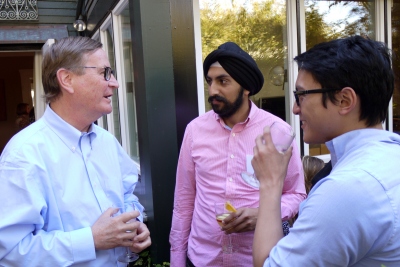 Hawgood held a reception for third-year medical students at his home in June 2013. Photo by Sarah Paris

Hawgood will continue to advance UCSF’s initiatives in both clinical and basic science, including its leadership in the nascent field of precision medicine, bringing together the fields of genetics, molecular research, bioinformatics and medicine to provide predictive and precise therapies for patients.

Continuing those initiatives is of top importance, Hawgood said.

“We’re well down the road on those initiatives, and they will continue as we overlay the forward-looking 2.0 issues,” he said. “We’re not going to retrench. We’re not going into hiatus. We’re going to push forward.”