If biology is destiny, then the slightest change in a gene’s DNA can become an agent of destiny. About 99.9 percent of the DNA “letters,” or chemical bases, that make up genes are identical in everyone. But the remaining sliver of variability can change a life.

A tweak in just one base out of thousands may make the difference between a healthy old age and an early decline into Alzheimer’s disease.

More often, researchers find that a number of diseases and traits – such as prostate cancer, type 2 diabetes, and high body mass index – arise from combinations of DNA variants scattered within and between our genes. In some cases, hundreds of these individual DNA units apparently work in concert with environmental factors to influence the onset and progression of disease.

Identifying the links between slight genetic aberrations and complex diseases is one of modern biology’s great challenges.

A team of scientists from UC San Francisco and Kaiser Permanente Northern California is now four years into an ambitious effort to trace the genetic and environmental roots of a range of disorders, from diabetes to cancer. They are doing so by tapping into one of the world’s largest and most thorough collections of patient health records.

They are drawing on the heath histories of more than 100,000 Kaiser member volunteers, each of whom spits for science – providing a saliva sample for genetic analysis.

Kaiser’s electronic medical records track up to 25 years of patients’ prescriptions, cholesterol levels, mammograms, MRI scans, and disease diagnoses. UCSF and Kaiser researchers have collaborated to create genetic profiles of the Kaiser volunteers and are working together to analyze this rich source of genetic, environmental, and health data.

The analysis and cross-analysis of this mother lode of Kaiser members’ health data and their genetic profiles is expected to speed early prediction of many disorders, aid development of treatments and cures, and personalize medicine by allowing physicians to tailor drugs and other therapies to each patient’s unique genetic makeup.

“The sheer size and ethnic diversity of the Kaiser population we are studying greatly increase the likelihood that our research will lead to new understanding of the genetic underpinnings of complex diseases,” says Neil Risch, PhD, the Lamond Family Foundation Distinguished Professor in Human Genetics, the director of UCSF’s Institute for Human Genetics, and co-leader of the collaborative research.

The Kaiser Permanente Research Division’s Cathy Schaefer, PhD, is co-leader of the research and executive director of Kaiser’s Research Program on Genes, Environment, and Health, which oversees the collaboration.

The research project is a pioneering example of computational health sciences, a central component of UCSF’s precision medicine platform. The discipline relies on computationally intensive – and sensitive – approaches, from mathematical and statistical strategies to genotyping and bioinformatics. These methodologies are used to analyze and cross-analyze large but discrete collections of data, such as the Kaiser members’ health histories and genetic makeup.

Single DNA variants are called SNPs, or single nucleotide polymorphisms. The research effort detects and analyzes SNPs throughout the entire genome of each of 110,266 Kaiser members.

UCSF genetic analysis experts look for SNPs at up to 900,000 sites in each person’s chromosomes – a kind of census of genetic variation. The analysis is known as a genome-wide association study, and this is one of the largest ever undertaken. 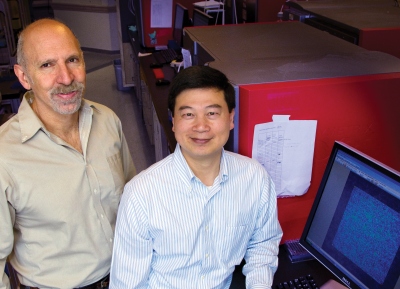 roots of a range of diseases by tapping into one of the world’s largest collections of
patient health records.

Armed with patients’ electronic medical records, Kaiser researchers zero in on changes over time in key health measures such as blood pressure and cholesterol level, as well as on the progress of any diseases, and then correlate this information with the genetic data.

From this extraordinarily large collection of clinical and genetic data, computational scientists apply sensitive and powerful statistical tools to determine the likelihood that specific genetic variations or combinations of variations might contribute to a specific disease.

“The research has already led us to discover more than 100 different genes underlying HDL and LDL cholesterol and triglyceride levels with more certainty than any previous effort,” Risch says.

Perhaps the most tantalizing early finding comes from a study of DNA segments called telomeres that were also measured in the 100,000-plus Kaiser participants. Telomeres seal off the ends of chromosomes and protect them from damage. Among the participants, who have an average age of 65, those with the shortest telomeres were statistically likely to have a 24 percent increased mortality risk over three years, the researchers found.

This increased health risk is roughly equivalent to the effect of smoking cigarettes for 20 to 30 years, says Kaiser’s Schaefer.

The association between telomere length and health has become an area of great interest over the last decade. The UCSF-Kaiser telomere study was undertaken as a collaboration with UCSF’s Elizabeth Blackburn, PhD, who holds the Morris Herzstein Endowed Chair in Biology and Physiology and won the Nobel Prize in 2009 for her pioneering studies of telomeres and the enzyme that maintains them.

Because of the ethnic diversity of the Kaiser population, the research project can also investigate how slight genetic variations associated with ethnicity might lead to increased risk for diseases such as hypertension or diabetes.

The sheer size and ethnic diversity of the Kaiser population we are studying greatly increase the likelihood that our research will lead to new understanding of the genetic underpinnings of complex diseases.

The scientists can also pinpoint how lifestyle choices – such as smoking or drinking histories, diet, and exercise – as well as demographic information interact with genetic factors and lead to disease. The data for this additional layer of correlations comes from surveys filled out by Kaiser member volunteers.

“So many studies have uncovered tantalizing connections between genetics and disease risk, but often with small numbers of patients and health records spanning just a short time – or even assessments of patient health at just one point in time,” Schaefer says. “But longitudinal data on such a large and fairly representative cohort allows us to look for common molecular origins of diverse diseases – a key concept in precision medicine.”

The tool used to detect SNPs is called a gene array, but to look for gene-disease links in an ethnically diverse population this large, UCSF genetic analysts needed to be able to customize the arrays. They turned to a company called Affymetrix that had recently built a highly automated genotyping instrument capable of handling customized arrays.

As far-reaching as the UCSF and Kaiser research ambitions are, Risch seems simply grateful for the distinct talents being brought to bear on the study of genetics and health.

“The truth is that this project would have been impossible at any other time or place. No single institution could have combined this level of genetic science and computational skill with such deep health records and epidemiologic expertise on this large and diverse patient population. It is an intellectual pleasure with great potential for human health.”