What a pathologist looks for in a Pap test sample, but hopes not to find, are oddly shaped cells with abnormally large nuclei. The same is true for prostate and lung cancer biopsies. In fact, most cancer cells display distorted structures.

“If you just open a text on the pathology of cells, you see hundreds of strange-looking cells – this one with a gigantic nucleus, that one with vacuoles that push the nucleus aside,” says Wallace Marshall, PhD ’97, an associate professor of biochemistry and biophysics. “It’s like an atlas of freakish cells.”

Marshall wondered if this lineup of distorted cells might hold a clue to a new way to fight cancer. Because cancer cells divide so quickly, they’re on a fast track to mutate and develop resistance to chemo drugs. So new drugs are continually added to the mix, often triggering an arms race between the chemo drugs and the cancer – a race that the cancer sometimes wins.

Marshall thought of a different strategy: what if the enlarged nuclei, and specialized cellular structures called organelles, actually drive cancer metabolism? If so, then developing ways to reverse organelle growth could rob cancer cells of the proteins and other resources they need to grow and proliferate.

The hypothesis exemplifies one of UC San Francisco’s precision medicine pillars: basic discovery. The long path to developing potent new treatments often starts with an observation in the lab that then leads to a question about a fundamental life process. This in turn prompts a “testable” hypothesis. Science is full of hypotheses that don’t pan out because experiments fail to support them. But those that survive the rigors of investigation can change minds – and save lives.

Marshall’s lab has begun to study the processes by which organelles enlarge. Once armed with that understanding, his team plans to test drug candidates to “deprogram” them and counter their growth.

Such a treatment approach could circumvent the key vulnerability of chemotherapy, Marshall says. It would not aim directly at the biochemical pathway that allows cancer cells to multiply rapidly – the very capacity that also allows them to mutate and develop resistance to drugs.

Instead, it would attack the cascade of chemical signals that regulates organelle growth. Marshall reasons that these signals are not likely to be the same ones that cancer cells use to mutate and evade the drugs.

These micrographs show two cells from mouse connective tissue. The nucleus is
stained blue in both cells. The first cell, left, is normal. In the second image, the
same kind of cell has become cancerous, and the nucleus has become so large
that it nearly fills the entire cell.

Even if cancer cells did develop resistance to drugs targeting their organelle growth, Marshall says, they would have double the work to evade both these drugs and the more conventional ones countering cellular proliferation.

Marshall likens organelles to “reaction vessels” – akin to tanks in a chemical plant, churning out products through chemical reactions. The size and design of the reaction vessels, he says, are just as important as the chemistry going on inside them. Shrink the vessels, and you cut their productivity.

He actually has two hypotheses about the link between organelle size and cancer. One postulates that gargantuan nuclei and organelles derive from the cancer cell’s need to ramp up its metabolism. If the “reaction vessels” could be made to return to their earlier, smaller configuration, the cancer cell might starve.

In his second scenario, the cancer cell’s hypermetabolism is a result of organelle growth, not its cause. But, again, by driving the organelles back to a more normal size range, the cell would revert to a less malignant state.

Marshall stresses that neither scenario has been tested. That’s his long-range goal. To get there, he must first understand the natural mechanisms that regulate organelle growth. His lab is now at the stage of finding out what specific steps control organelle growth – how a cell knows the size of its nuclei and mitochondria, for example, or knows if it’s well fed.

If he can identify the genetic controls or enzymes and other molecules that underlie these processes, he would have targets for potential drugs to reprogram the abnormal growth. 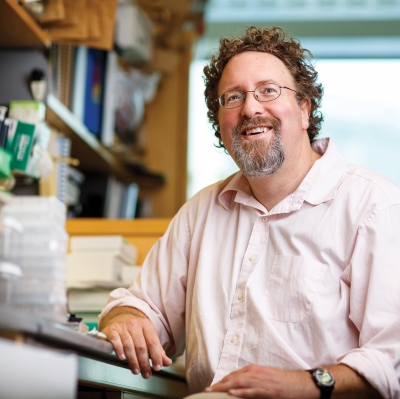 Biochemist Wallace Marshall is researching cellular structures called organelles
to see how closely they are related to cancer metabolism.

In collaboration with UCSF’s Small Molecule Discovery Center, his lab is carrying out automated, “high-throughput” tests, like those used in commercial drug development, to screen for drug candidates that impede specific genes or molecules. Such screening efforts often search through tens of thousands to hundreds of thousands of compounds to find the few able to block the target enzyme.

His colleague Davide Ruggero, PhD, who holds UCSF’s Helen Diller Family Endowed Chair of Basic Science in Urological Cancer, has developed a technique to inject/introduce oncogenes into progenitors of connective tissue known as fibroblast cells. This induces tumor formation. By then using special stains to reveal the organelles in the resulting tumor cells, Marshall’s team can scrutinize cells at various stages of cancer growth.

“We have the trajectory of how they change as they become cancer cells. If we can move them back along the same trajectory, we’ll see if that can arrest the cancer growth.”

It’s a long way from a fundamental insight to an approved therapy, and Marshall is the first to admit it. But he says UCSF’s precision medicine mindset will likely play a key role in making that journey more quickly.

“I think the standard drug therapy approach is often a ‘fire and forget’ strategy – like a ballistic missile. You pick the drug, you give it to the patient, and cross your fingers that it will work. But precision medicine entails following up with more research to measure how the individual patient is responding – through physiological indicators or gene expression patterns or, if our organelle-based approaches pan out, measuring at the level of cellular structure.”

Precision medicine, then, extends the process into an ongoing, evidence-based approach to find not only whether a patient got better, but how and why and at what rate.

“This will allow us to steer patients back to a more healthy state instead of only hammering them with drugs,” Marshall says.