Ashley Selman – part drill sergeant, part cheerleader – meets every grunt and bead of sweat in her training studio with encouragement. 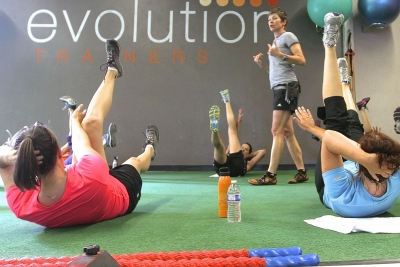 Ashley Selman, standing, motivates her fitness clients as they do abdominal

Selman, whose successful career as a fitness trainer developed from her lifelong love of sports, was finishing up her last day at work before a scheduled hip replacement surgery at UC San Francisco.

Selman, 43, is an unlikely candidate for this type of procedure. But the former collegiate athlete’s hip troubles go back almost 30 years, when she injured her right hip during a skiing accident as a teenager. She had learned to live with the discomfort, but eventually the pain began to interfere with everyday life.

“Basically my cartilage is worn down. I have multiple bone spurs,” Selman said. “The bone shape has changed over time. And I have pain with pretty much every movement of my hip.”

An Athletic Career at Risk

A competitive athlete most of her life, Selman set seven junior records in softball and track and  field, and later became a two-time NCAA champion in javelin throw while attending the University of Southern California.

During her training career, Selman has prepared Olympic heptathlon champion Jackie Joyner-Kersee for the 1996 Summer Olympics, and World Cup soccer champion Brandi Chastain for her final professional soccer season in 2009. 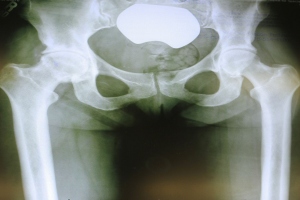 An X-ray image of Ashley Selman's hip helped determine that

the best course of action for her was total hip replacement.

“The first picture I saw of myself was when I was 2 years old. I was dribbling a basketball,” she said. “Fitness has just been a part of my DNA.”

Today, Selman owns and operates Evolution Trainers, a 10,000-square foot personal training facility in Mountain View, Calif. With a successful athletic career at stake, she was determined to find the best solution for her hip problems.

She did extensive research on hip replacement techniques and surgeons: What is the difference between hip resurfacing versus hip replacement? Which method has better results? What type of materials do are used? Who is the best surgeon for each type of procedure?

Selman spent eight years researching these questions online, carefully collecting data on the education and training of orthopaedic surgeons from California to New York, and their patients’ satisfaction with the procedures.

All of the pieces eventually fit together and in early 2013, Selman chose Thomas Parker Vail, MD, chief of the UCSF Department of Orthopaedic Surgery and considered one of the nation’s top orthopaedic surgeons. The department is internationally recognized for its work in patient care, as well as research programs that focus on cartilage and disc regeneration, fracture healing, molecular and stem cell biology, bioengineering, and musculoskeletal development.

“There was an immediate connection,” Selman said. “Dr. Vail was knowledgeable and easy to talk to. Immediately he put my mind at ease.”

The number of total hip replacement surgeries in the United States has tripled in the past 30 years. In 1991, 117,000 people got new hips versus 332,000 in 2012, according to the U.S. Centers for Disease Control and Prevention. Improved surgical techniques have made hip replacement surgery safer with faster recovery time. 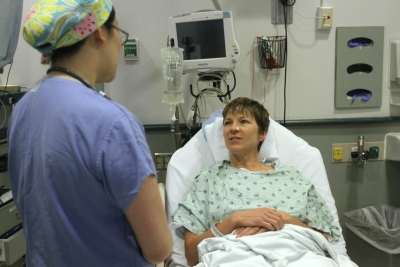 Ashley Selman goes over her pre-surgery instructions with one of her surgeons at
UCSF Medical Center.

“We can now do the operation with less physical stress, less blood loss, and less pain,” Vail said. “Now under the right indications, we can help people in their 80s and 90s and even those in their 40s through surgery.”

Selman represents a new crop of Internet-savvy patients, who are adept at researching pertinent information on surgical procedures and the surgeons who perform them.

“I looked at different options: Is it a front or anterior approach, or a back or posterior approach? What materials are they going to use?” she said. “I ended up choosing Dr. Vail after seeing reviews about him on a couple of websites that were talking about both resurfacing and replacement.”

Surgery may not always be the best option for those with hip or knee pain, but a combination of factors can help determine the right course of action.

“Patients are much more savvy in how they approach their doctors now. And it’s rare that I have a patient who doesn’t come in with some material, some recommendations, having done some research,” Vail said. “It helps patients ask the right questions, and it may direct them to resources that they otherwise wouldn’t have access to.”

For Selman, the right course of action was hip replacement surgery.

“She had great skeletal health. It was the cartilage that was gone. It was the surface of the joint that was missing,” Vail said. “But her muscles, her tendons, her joints, and her skeleton were in great shape.”

During Selman’s three-and-a-half-hour surgery on May 7, Vail and his team carefully prepared her right hip – chipping away unneeded bone fragments with drills – for a metal rod, which would fuse itself to Selman’s hip bone. 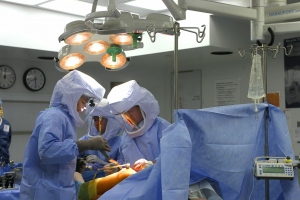 of Orthopaedic Surgery, operates on Ashley Selman's hip on

Selman spent the next three days at UCSF Medical Center, and then went home for rehabilitation.

Normally, patients go through rehab at a hospital or some other type of medical facility. But since Selman is a fitness junkie, she had all the equipment to go through rehab at home: a stationary bike, a set of free weights and rolling pins to keep her muscles loose.

A week after surgery, she was walking with the aid of crutches. Her right hip was sore, but she managed to power through a brisk, five-minute workout on her stationary bike.

“My mobility immediately improved. That was exciting to see in and of itself,” Selman said. “There are still a couple of motions that are tight that I’m trying to work through, especially in the glutes.”

Beyond the technical aspects of the operation, the patient’s general health profile makes a big difference in terms of the expected recovery time and the risk of complications. 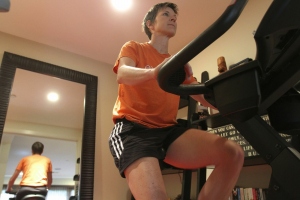 Just one week after her hip replacement, Ashley Selman was

part of her rehabilitation.

“Many times we’ll have a conversation with a patient about trying to get closer to ideal body weight, quitting smoking or optimizing blood sugar if you’re a diabetic,” Vail said. “All these factors make a big difference in speed of recovery, diminished risk of a complication and a better overall experience with surgery.”

None of these concerns applied to Selman.

“Ashley is slender and in good physical condition generally, so that makes the operation easier,” Vail said. “That elevates my level of expectation of her recovery right away.”

An Investment in Long term Health

About a month after hip replacement surgery, Selman was back to work at her Mountain View fitness studio.

“When I walked in, everyone greeted me at the door, cheering me on,” she said. “It was great to see my friends and my clients so happy to see me. I definitely felt missed.” 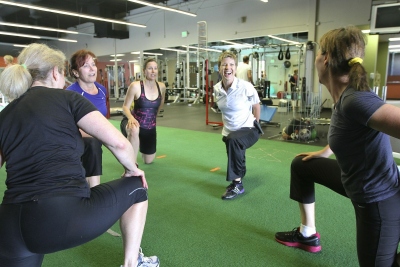 Ashley Selman shares a moment with her clients during cool-down exercises at
Evolution Trainers, about a month after her total hip replacement surgery at
UCSF Medical Center.

Selman went from crutches, to a cane, to relying on her brand new hip in a matter of weeks. “It felt good to cross this hurdle, and to know that I’m OK and that this was successful,” she said.

“She’s proven in the early going that she’ll do very well,” he said. “She’s sort of a model in terms of being informed and asking the right questions and focusing on her rehab. So I am very confident that she is going to meet and even exceed expectations, and return to an active lifestyle.”

As someone who has pushed herself most of her life, Selman offered this piece of advice for those with hip pain: “Don’t let fear limit what you can have.”